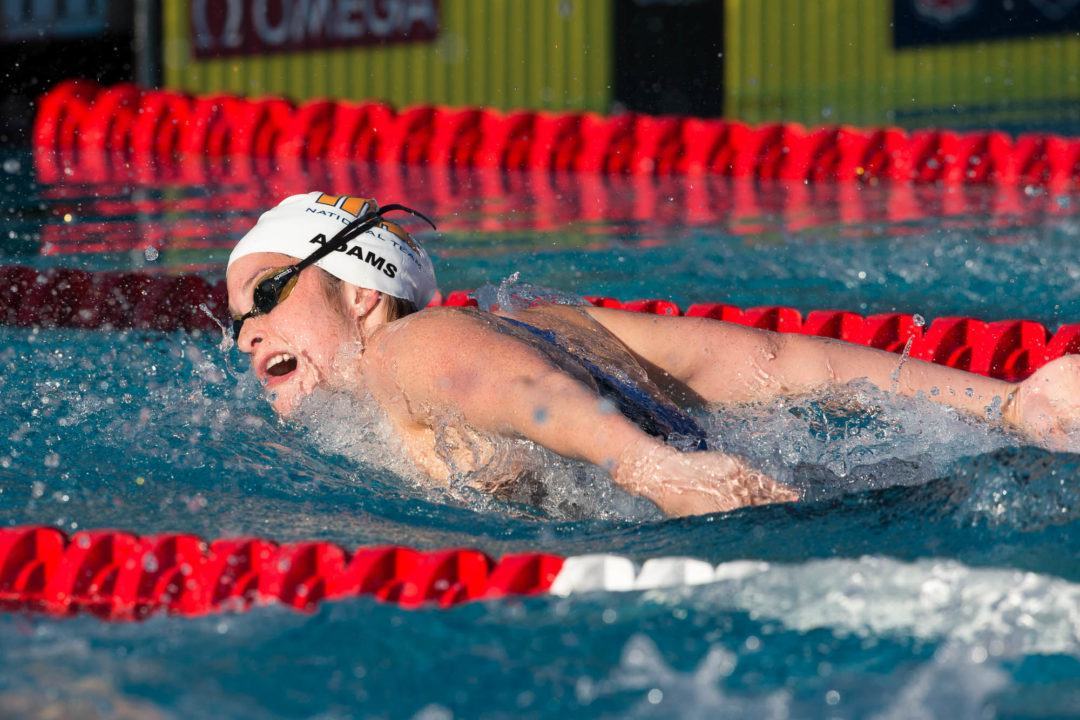 2012 Olympian Cammile Adams is the favorite in the 200 Butterfly heading into the 2016 US Olympic Trials. Archive photo via Tim Binning/TheSwimPictures.com

Historically, American women have dominated the 200 Butterfly event at the Olympics, winning a medal in almost all Olympic Games until 2000. After Misty Hyman’s gold medal in the 200 fly at the 2000 Sydney Olympics, though, no American has medaled in the event. This year’s field at the US Olympic trials is shaping up to be one of the strongest in recent years and those who make the Olympic team are in a great position to end the medal drought in this event.

Early favorite Cammile Adams, 2012 Olympian and 5th place finisher in the 200 fly, posted the top qualifying time at the FINA World Cup in August, 2:06.33. After graduating from Texas A&M in 2014, Adams has intensified her training by joining SwimMAC Elite in Charlotte and the training has been paying off with faster times. Adams has a ton of international meet experience and has been mentored by previous Olympians in the 200 fly, such as Misty Hyman and 2012 Olympian Kathleen Hersey. With her combination of experience, top times, and intense training leading up to Trials, Adams will be the one to beat in Omaha.

Cammile Adams and Katie McLaughlin at Worlds in 2015. (courtesy of Tim Binning, theswimpictures.com)

Mission Viejo’s Katie McLaughlin is the only other qualifier below 2:07 going into Olympic Trials, but with a neck injury that ended her college season, it will be hard to predict a top two finish for her. McLaughlin swam at the Fran Crippen Swim Meet of Champions, but has yet to get back to her times from last summer when she finished 6th at World Championships. Certainly, McLaughlin has a chance at earning a spot on the Olympic team in her best event, the 200 fly, but she will need to be back in the shape she was last summer, pre-injury.

The qualifier with the best shot at one of the Olympic spots besides Adams is 16-year-old Nation’s Capital swimmer Cassidy Bayer. Bayer broke out onto the elite scene at 13 years old by posting a 2:11 at World Championship Trials in 2013 and continued this forward momentum through 2015 US Nationals, posting her best time of 2:08.03. Having broken a National Age Group record that belonged to Olympic legend Mary T. Meagher (the 13-14 200 yard butterfly in 2013), Bayer has shown flashes of talent that could relaunch the American legacy of dominance in this event.

Coming in as the third seed, Stanford’s Maya DiRado hasn’t focused much on the 200 Butterfly with her huge success recently in the 200 and 400 IMs, but DiRado has a good chance of making the Olympic team in her secondary events as well. DiRado finished 9th at 2014 Pan Pac’s in the 200 fly, posting her best time of 2:07.42, and finished 12th at 2013 World Championships.

The worry is that the 200 fly could become a casualty of DiRado’s tough lineup selection choices. It overlaps really badly with the 200 IM, where DiRado is perhaps the favorite – 200 fly semifinals are separated from the 200 IM finals by just one event. And earlier in that same session are finals of the 200 free, where DiRado could decide to contend for a slot on the U.S. 4×200 free relay. We’ll keep DiRado in our picks here, assuming she swims heats of the 200 free but focuses more on the 200 fly and 200 IM.

Recent college graduates Hali Flickinger and Kelsi Worrell are both coming off of solid college seasons and will likely continue that momentum into Olympic Trials. Flickinger is the 200 yard fly record holder at the University of Georgia and helped lead the team to an NCAA title this season. Flickinger finished fourth in the 200 yard fly at NCAAs, but she has been successful in long course over the years, posting her best time of 2:07.59 at 2015 US Nationals last summer.

Worrell, while most successful in the sprints, is coming off of a phenomenal college season, winning both the 100 and 200 yard fly events at NCAAs. Over the past two years, Worrell has shown that she is one the strongest American women in the butterfly events and has a great shot of making the Olympic team in her strongest event, the 100 fly. Still, don’t count Worrell out in the 200 fly. At NCAAs, she proved that she can hold on at end of the 200 by holding off Stanford’s Ella Eastin.

Eastin is ranked far below the field with a 2:10.12 and has a better shot of making the Olympic team in the IM events, but based on her showdown with Worrell in March, don’t count Eastin out either. Both Flickinger and Eastin have to deal with doubles and/or lineup choices here. Flickinger is entered here and in the 200 free, but should be able to manage that double without scratching out.

Eastin, who is entered in the 200 free, 200 fly and 200 IM, seems far more likely to focus on the IM, so she’ll only follow through with this entry if she’s willing to take on a rough event double finishing with the IM final. Worrell could have a conflict between the 100 free semis and the 200 fly final on day 4. But that will likely be a game-day scratch decision based on her early swims in both races.

SwimMAC’s Kate Mills posted her best time of 2:08.89 at the 2015 Pan American Games last summer, following a 5th place finish in the 200 fly at US Nationals in 2014. Mills is solid in the 200 fly, but has never quite had a breakout swim in the event to qualify for Olympic or World Championship teams. Rounding out the top eight seeds currently is University of Kentucky graduate Christina Bechtel, who made her international swimming debut at the World University Games in 2015 in the 50 and 100 fly. Bechtel has a shot of finishing in the finals at Olympic Trials this summer, especially if she can make big drops from last summer.

Finally, don’t count out Crown Point Swim Club’s Hannah Kukurugya. The 16 year old from Indiana posted a 2:09.68 at 2014 Junior Pan Pacs and could be the youngster that breaks out this summer and finishes in the top 8. With two more years of training under her belt, Kukurugya could realistically make huge drops and final within this field of accomplished swimmers.

Dark Horse: Razorback Aquatic Club’s Taylor Pike made a two-second drop in December at AT&T Winter Nationals in the 200 fly from the time she posted last summer at US Nationals. The youngster is showing that she is ready for another huge drop soon, based on similar improvements in the 200 yard fly this past season. If Pike can continue her time drop trends from the past year, she has a great shot of finishing in the finals of the 200 fly at Olympic Trials.

I hope Adams makes it, but if she doesn’t go out fast enough she won’t because Worell has speed. I really think Worell and Dirado will make it.

Worell is much stronger in the 100 than the 200, especially in LC. I would be shocked if she made the team in the 200, especially over Adams. With the exception of the 400 and 800 free, I don’t think any event on the woman’s side has a more clear favorite than Adams the 200 fly.

I agree, except I would add Ledecky in the 200 free also.

I agree with this pick. Mc Laughlin is the wildcard, it wouldn’t surprise me totally if she snuck in. You guys at SwimSwam must have some insider scoop on Bayer and Eastin; even if Eastin swam it, based on all the public stats, I wouldn’t expect an over three second drop, not with the other events she’s focusing on.