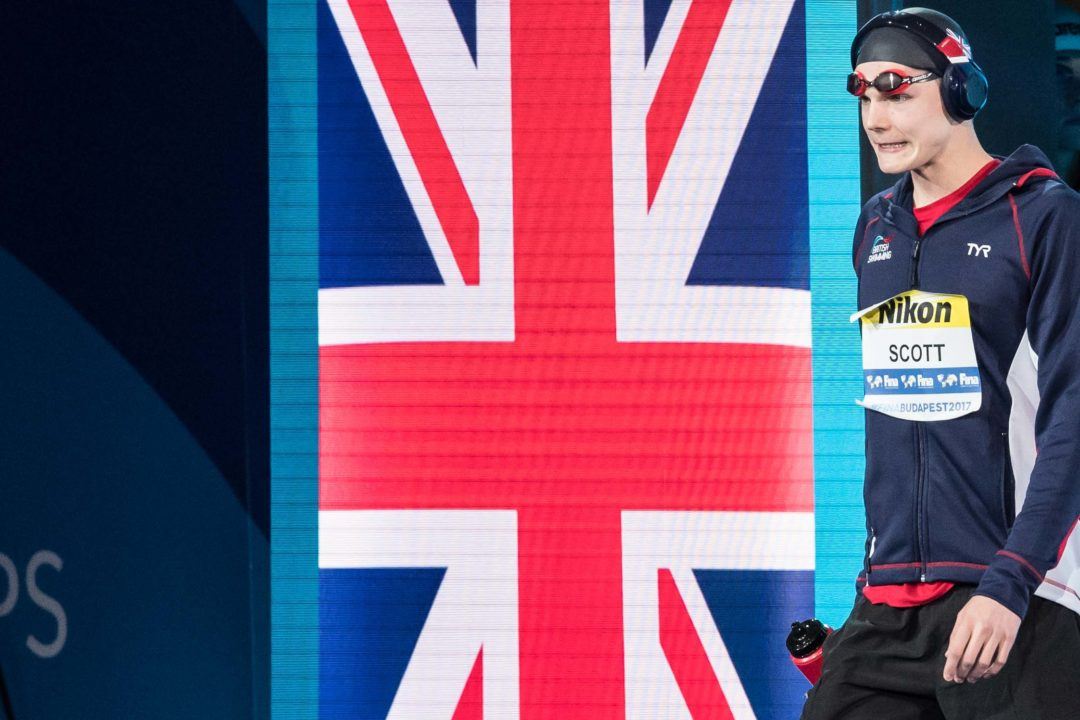 A combination of swimmers slower than their bests, and not using their best swimmers, left the British 400 free relay in 10th place on Friday morning and out of the final. Archive photo via Mike Lewis/Ola Vista Photography

The pool is getting deeper in Europe, and Great Britain learned that the hard way on Friday morning at the 2018 European Aquatics Championships in Glasgow. In front of a home crowd in Glasgow, the British men sloughed the 400 free relay and missed the final, finishing just 10th in the heats. Also failing to  advance was France – though they used their best swimmer, Mehdy Metella, on the anchor, and in spite of having the second-fastest split of the field in 48.2, it wasn’t enough for France to advance.

At the Commonwealth Games, Scotland on its own was able to go 4:16.53 in prelims of the 400 free relay. In that same relay, David Cumberlidge, swimming for England, led-off in a new lifetime best of 49.08. That actually makes him the second-fastest British swimmer on a flat start this season, so his inclusion wasn’t necessarily intended to be a softening of the relay. He was 8-tenths slower than that in prelims on Friday, even on a rolling start.

McLean was 6-tenths slower than he was in the morning at the Commonwealth Games. The Welshman Jarvis has been under 49 in his career, but not since 2015 – his 49.68 on Friday was right on his season-best, though still well short of his lifetime best.

So, while Britain had a decent relay put together on paper, including James Guy who was right on his Commonwealth Games split to anchor (48.39 vs. 48.34 on the Gold Coast), they had opportunities at every position of this relay to make a change for the better. That includes by putting either Duncan Scott (who split 47.62 rolling in Australia) or Ben Proud (who split 47.93 rolling in Australia) on the relay.

Britain has a mountain of other less-obvious swimmers who have relay-split 48 in this race as well. David Thompson, Stephen Milne, and Scott McLay all did so at the Commonwealth Games. Thompson and McLay aren’t even on the British roster.

Great Britain didn’t swim this relay at last year’s World Championships, where they took gold in the 800 and silver in the 400 medley relay. They haven’t raced the event at LC Euros since 2010.

The miss delays the start of the meet for Britain’s top male swimmers Duncan Scott (until Saturday in the 100 free) and Ben Proud (until Monday in the 50 fly).

Rylov leading off and Kolesnikov anchoring for Russia in the final. Wouldnt be shocked if theyre chucked on the 4×200 aswell. Izotov and Morozov in the middle.

Wouldnt be shocked by a 48low for Rylov.

That is a fantastically appropriate photo.

What a lovely picture of Duncan.

I thought it was well chosen. Can imagine a few British coaches were making that face at each-other this morning.

Pan Pac won´t have prelims on relays.. not enough teams.. and considering that on the relays at most there is one team only that can get neat to beat US… impossible for them to be out of podium

I like both Proud and Scott and assume they would have wanted to swim? The coaches are to blame. I can accept Scott being left off as he has a big schedule but Proud only has nothing until Monday

British Swimming talking heads go on about creating a winning mentality, a toughness… then rest swimmers who don’t have a swim for 3 days…

In 2008 Olympics, GBR womens 4×200 were also among the medal favorites and didn’t even final because they rested their top swimmers. They repeat the same mistake lol

France made the same mistake. Seems to happen quite often… I remember Brazil missing some finals by not putting Cielo. Old days

France had everyone on the relay.

Stravius was rested, but their team should still have made the final comfortably. Mignon leading off with a 50.0 and Pothain splitting 49.9 really killed them.

Mignon is done and Pothain is not a sprinter. It’s not a big news to see our relay out of the final. With Stravius they would have qualified but anyway with no medal chance at all. The golden years are over. Hopefully we can quickly find some new sprint talents to be a medal contender at home in 2024.

You found a new relay win with the women !! Thats great in itself and worth a serious mention