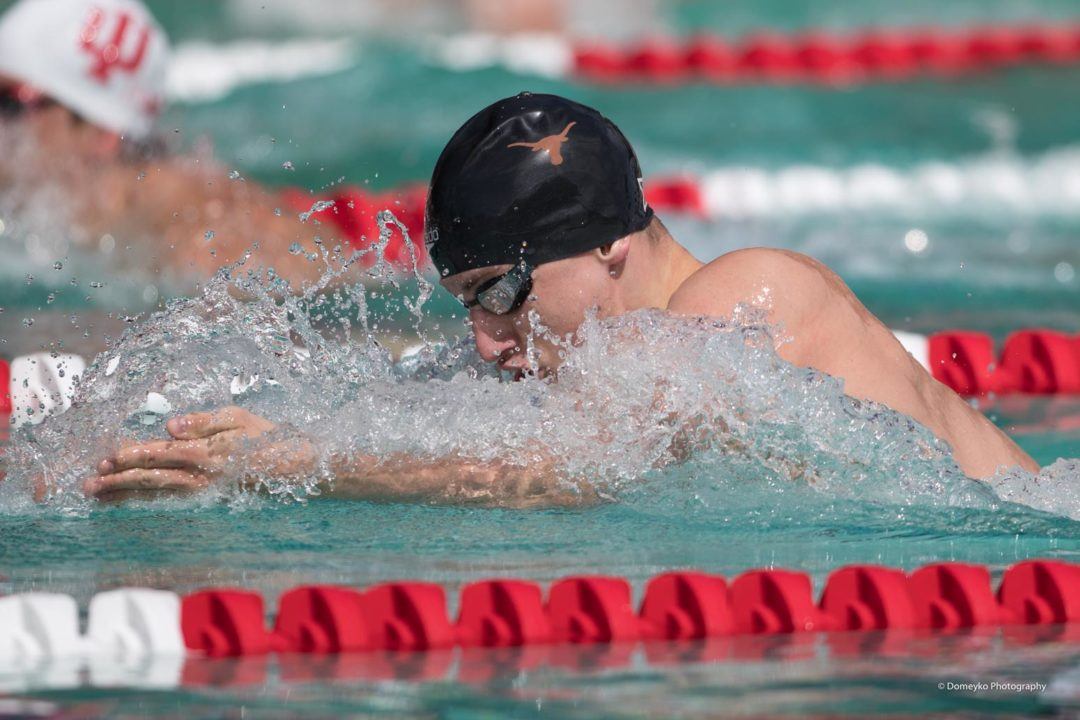 The race of the night was in the men’s 100 breast, as two international roster hopefuls were pitted against each other. Andrew Wilson, the Emory standout who has been training with Longhorn Aquatics, took the win over club teammate and Texas alum Will Licon.

Both men have been faster in 2018. Wilson leads all Americans with a very impressive 59.19 from the Atlanta PSS meet, while Licon’s 1:00.60 from the late-June George Block Invitational has him in 5th.

A lane line reportedly snapped during the men’s 100 breast A final, though based on the times swum in the final, there didn’t seem to be any significant impact on the race or the swimmers’ times. There was no re-swim.

Another Texas alum, Jack Conger, looked sharp with a 48.76 swim in the 100 free representing NCAP. That’s a PR by .04, beating the 48.80 he did in Atlanta. Conger has now logged his only two instances of being sub-49, ever, this year. He ranks 2nd among Americans this year behind only Nathan Adrian (48.58). Conger is definitely looking like a fantastic option for the USA relays for this summer.

Longhorn Aquatics’ Tate Jackson and NOVA of Virginia’s Townley Haas, both teammates during the school year at Texas, were 2nd and 3rd at 49.67 and 49.71, respectively.

The women’s 200 back race went to Longhorn Aquatics’ Quinn Carrozza, who threw down a lifetime best 2:10.47 to finish well ahead of Magnolia Aquatic Club and soon-to-be Stanford freshman Lucie Nordmann (2:11.90). This is only Carrozza’s 2nd time under 2:11– the first was at the 2017 U.S. Open Champs last summer. She ranks 8th among Americans this year.

The Longhorn Aquatics women’s 4×200 free relay took the win, with an excellent 1:58.81 anchor leg from Evie Pfeifer. The rising Texas sophomore has been on a tear this past year hitting PR after PR, and that’s a great swim — her flat start best is a 2:01.19 from June.

I wonder if Conger is focusing more on the 100 free/100 fly this year? The last couple years I’ve thought of his primary LC events being 200 fly/200 free. In the past he’s had trouble maintaining his peak in the second summer meet (World/Olympics). Maybe a focus on the speed will help him do this.

Really hoping Licon and conger have monster summers this year. They probably the most impressive swims scy of the 2017 Texas crew and I really wanna see me translate those 200 (breast and fly) into some good long course swim.

Wow, it’s really anyone’s guess who will take (probably) the 3rd and 4th spots in 100free at Trials (assuming that Dressel dominates and Adrian is his usual reliable self). Apple? Held? Haas? Conger? Chadwick? Pieroni? Someone else?

Man do not sleep on Haas and Pieroni when it comes to getting ahead off adrian. Those 1:29’s are something else. My top 6 in order right now would be
Dressel
Haas
Adrian
Pieroni
Held
Apple.

that relay will be exciting to watch this summer …..

Justin Ress could make it in too

i would not add Lochte or Murphy as yet but well Chadwick ( might well crack the 48.5 this summer ) Jackson , & Justin Ress . I can’t see Team Usa loosing that relay in a looming time right now .

Townley Haas seems to be the best BIg Meet swimmer of the talented Texas crew.

Jack Conger excels in multiple events. I thought he’d make the podium in the 200 fly at Worlds last year.

Distance freestyler in high school. Started Texas as a backstroker. Ended Texas as American record holder in 200 butterfly. Now he is a sprinter. I had a difficult enough time with one event.

A beast without world or olympic medal in individual so far.
He’s very good in many events. But always the same question with him. Will he be great at one event?
Fly or free? At least he has dropped backstroke for a few years now.
At one point of his career I thought he would be a monster backstroker. Then I thought he would be the next great US 200 free swimmer. And then he focuses more on fly and swims very good times.
I continue to think he could be great in the 200 free and the event is much more open at the international level than the 200 fly. No real star for the… Read more »

Titles dont matter that much when u care for progression – and each high level swimmer has a unique trajectory & progression . U should be aware of those facts by now …but again , u only care for the medals , not the Path that lead to medals . Sad mentality i am afraid ( and please dont bring it with the Team France in football if they win in Sunday ) .😂

At the level Conger is competing at titles is all that matters. He’s not young anymore and while he’s incredibly versatile it would be good to see him win on the international stage. Very solid relay contributor for US. Bobo’s analysis is spot on.

Titles need progression as u mentioned – u seem on the same level as BOBO . sorry ….i dont agree .