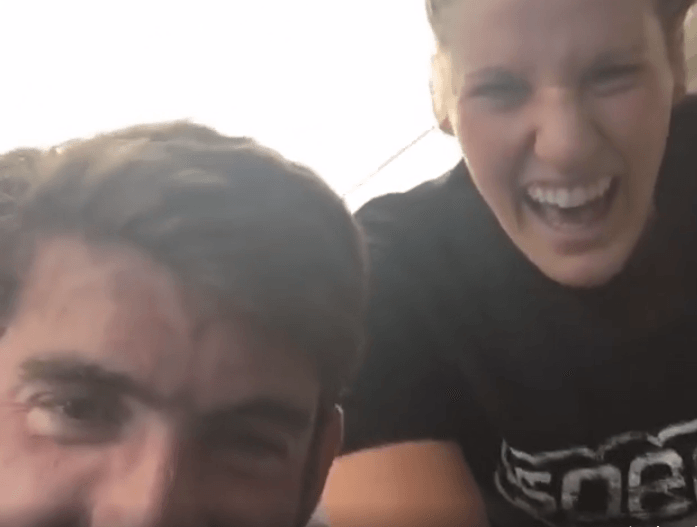 The video below is courtesy of Michael Phelps‘ Facebook page.

Michael Phelps went live again to keep fans updated with his summer swimming preparations on Facebook. He went live five days ago, and you can see the video here.

During his live session via his phone, Phelps gets some cupping work done and plenty of elite swimmers make appearances throughout. Some guests on his live session included Conor Dwyer, Missy Franklin, Allison Schmitt, Cierra Runge, and more. Phelps answered a ton of questions throughout the video, so check it out to see where he’s at with just under a month before the Olympic Trials.

He closes the video telling fans that he’s going to head out to the golf course with Dwyer later today. Go to the 19:50 mark to see what he says about his taper this summer.

Phelps is the winningest Olympian of all time, with 18 gold medals and 22 overall. He’ll look to add to that count this summer, with his best shots individually coming in the 100 and 200 fly along with the 200 IM.

I think that is Awesome what you are doing by going live! I know that this probably will not get to you but just in case my son is coming to the Olympic Trials Finals on Thursday-Saturday for his 13th.Birthday gift from mom in hopes of meeting you. His name is Ahmad Woodson from USA Virginia Swimming with 4 years under his belt. Ahmad just started making his State Cuts this year as a 12 year old in his 50 (SCY) 50 $ 200 ( LC ) Breast Stroke. His most challenging stroke is his Fly and he work extra on it after 2 hours of practice everyday so that he can build it up because he Loves doing IM’s… Read more »

Let’s ask Bob and then really enjoy his complete non-answer.

Phelps’ trainer stated Phelps has squatted 385 pounds x 2. That is remarkable, and probably makes Phelps one of the strongest swimmers on earth.

That’s heavy, but nowhere close to the strongest swimmer on earth. I know plenty of college swimmers that can put that weight up.

That is Nathan Adrian’s warm up weight after he is done rope towing a Subaru.

Practically true. Cal had to special order dumb bells greater than 120 lbs to challenge him.

1) Where did you see that; I would like to read that very badly.
2) Assuming plenty of sprinters are stronger than that, though.

Something else up on here mentioned he doubled his max squat recently, so if he’s up to near 400 lbs now I could buy it.

I take it back, it’s on the video. Sick nasty.

Pretty sure there was a video this past year on SwimSwam of Ryan Lochte spotting Arianna Vanderpoole Wallace as she was squatting 380 lbs.

That is remarkable fir an athlete in any sport and incredible for a swimmer!

No. That is pedestrian. An average young man who trains for a year can expect to be this strong. I am shocked to hear that a professional athlete who is training his squat strength could possibly be this weak.

That’s not true. It’s well into the advanced standard for the 198 weight class, and is easily within the weight range that would be competitive in local powerlifting competition. If you think a 385 squat for an athlete is week, I suspect you might be thinking of those football half-depth “squats” that artificially tack an extra 250 onto your squat.

I’m thinking of a below parallel back squat. It is weak for an athlete that has presumably been training with weights for the last fifteen years. It must be that it is not important for Phelps to be strong in this way.

Yes, and let’s also remember that many football players are juicing with steroids and/or growth hormone. It was true of my college (D3) football team. And Jack also said “local”. Personally, it makes me nervous to see an elite swimmer going very heavy on squats. I’d rather see them opt for the safer, more back friendly Bulgarian squat, a.k.a. Rear leg elevated split squat.

Looking at London, it could also be safe to say he was overtrained..