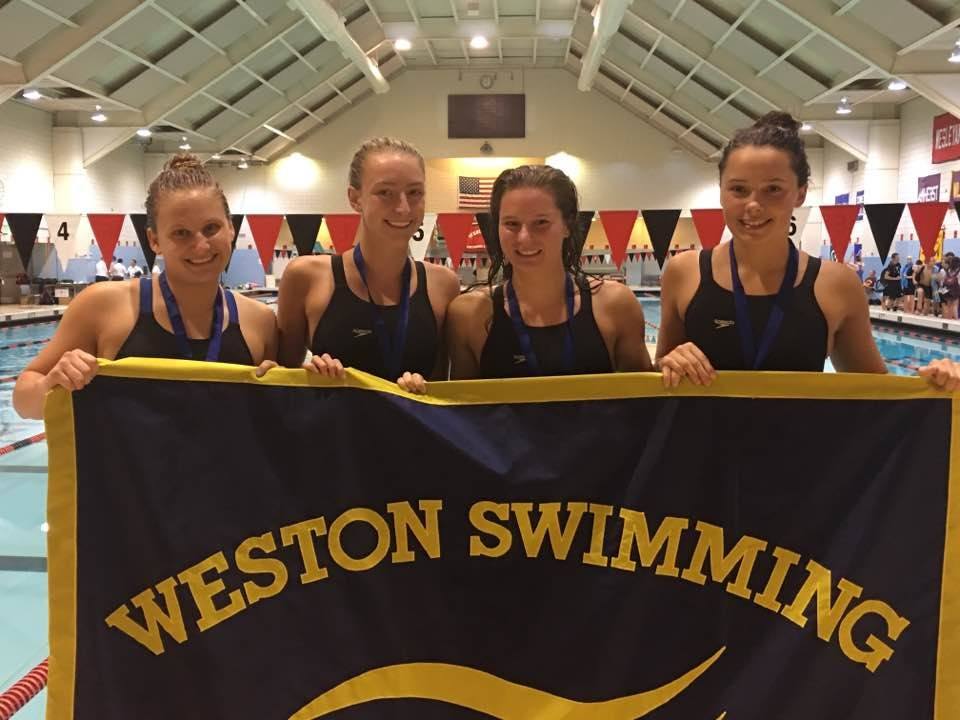 Weston Swimming women pulled off an impressive win in the 200 Medley from the B final at last weekend’s Connecticut... Current photo via Weston Swimming

Weston Swimming women pulled off an impressive win in the 200 Medley from the B final at last weekend’s Connecticut Senior LC Championships. Seeded 15th, the relay of Samantha McStocker (18), Sophie Angus (18), Charlotte Proceller (16) and Megan Phelan (16) had a resounding victory in the B final and shattered the four year old CT record by 2.05 seconds with a time of 2:00.89. With the A final still to come and top competitors from Cheshire Sea Dogs and Ridgefield Aquatic Club, keeping that record and winning was anything but certain.

“Samantha, Sophie, Charlotte and Megan were determined to win and take the record, and they generally accomplish what they put their minds to. But I have to admit it was pretty tense watching that A final,” said Senior Coach Chris Riley. Riley was right as both Cheshire and Ridgefield broke the CT record, but Weston women prevailed and took first place.

“This was a great send off for our seniors. Samantha will be swimming for Trinity College and Sophie joins Northwestern’s team next year,” asserted Head Coach Ryan Loechner. “We will miss their leadership on the team, but the future remains bright for Weston Swimming with great up and coming talent from our men and women swimmers.” Sophie Angus also had an impressive victory in the 100 breast, and broke the CT record by .98 seconds with a time of 1:09.86

I wasn’t at the meet….but surely impressive to break the CT record in the B final!! Way to go girls!!!