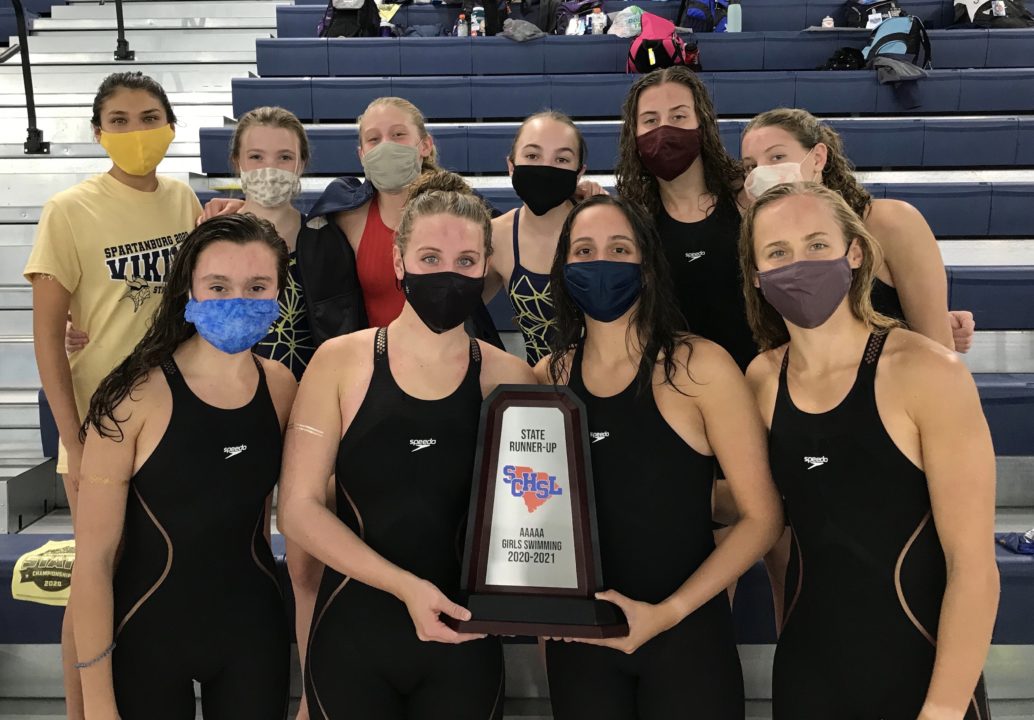 On October 9, Fort Dorchester High School was forced to pull out of the meet after one of their swimmers tested positive for coronavirus. A member of the 5A division, Fort Dorchester finished 21st overall at last year’s meet.

The 5A Division includes the largest schools of the SCHSL’s three swimming divisions. Schools competing in this division are the largest in the league, under its recent reclassification that was based on enrollment numbers as of mid-2019.

In the team battle, the 3x defending state champion Wando High School came out on top again. Despite only winning one individual event, Wando showcased incredible depth en route to its 424 point-finish over second-place Spartanburg who scored 398 points.

This depth was proven as Wando managed to come in 2nd place in two relays and in 3 individual events. The team also had 6 swimmers score over 30 points individually, and 11 out of their 12 swimmers contributed to the point total.

Wando’s only win of the day came in the 100 breaststroke, where Mary Shaw touched in a time of 1:04.49 for the victory. Shaw dramatically improved her 5th place finish from last season, swimming over 3 seconds faster (1:07.64).

Runner-up Spartanburg had a great showing as a team, winning all three relays and setting several meet records throughout the session.

Spartanburg opened the meet by winning the 200 medley relay by over 3 seconds. The team of Sophia Kannee, Caroline Byers, Annika McEnroe, and Kirsti McEnroe combined for a time of 1:43.61, which broke the meet record (1:45.57) set by JL Mann in 2013 by almost 2 seconds. Notably, that JL Mann relay included now-SEC Champion and Olympian Ali Galyer on it.  The relay also earned an automatic All-America time standard with their swim.

Kirsti McEnroe continued Spartanburg’s momentum into the next event, defending her title in the 200 freestyle in a time of 1:47.26. With her swim, McErone took down the 16 year-old meet record of 1:48.96 set by Austen Carter in 2004. She also booked herself an individual automatic All-America cut.

Kirsti’s older sister Annika McEnroe broke another meet record in the next event. Swimming the 200 IM, Annika McErone touched in 1:59.29 to dip under the 2:00-barrier and under the old meet record (2:00.99) set by Megan Kingsley in 2012.

Annika McEnroe returned 2 events later in the 100 butterfly, swimming her 3rd meet record of the day. McEnroe swam to a time of 53.06, which took almost exactly a second off of Kingsley’s old record of 54.03.

In the final event of the day, the 400 freestyle relay, Annika and Kirsti McEnroe teamed up with their younger sister Teagan McEnroe and Anna Buchert to win the event in record-breaking fashion. The foursome swam to a final time of 3:29.48, knocking a second off of Riverside’s meet record (3:30.11) set in 2013.

Annika McEnroe, who was named as one of the “Best of the Rest” in SwimSwam’s Class of 2021 Recruit Rankings is currently committed to join the Cal Bears in the fall.