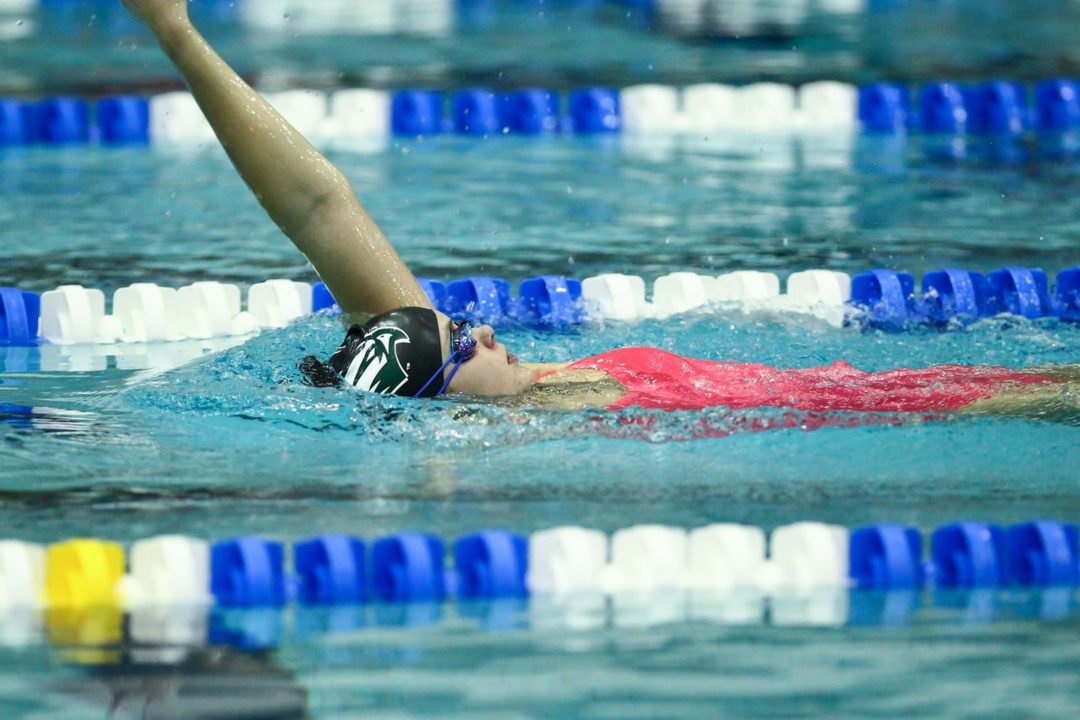 The Wagner College women swept its competition at the Iona Quad for the third straight season, while the Iona men defeated St. Francis Brooklyn in a dual. Current photo via Larry Levanti, Wagner Athletics

Senior co-captain James Whaley, the school record holder in the 200-butterfly, posted a strong, early-season time and meet record of 1:56.49. That mark was .2 under the 2018 mark of teammate Conor Mullin, who finished second in today’s race.

Sophomore Daniel Hadary and Anderson battled stroke-for-stroke over the last eight lengths of the 20-length 500-freestyle, with Hadary winning by 1.8 seconds at 4:45.97, which was 3 seconds under Christian Foti’s 2016 standard. The final men’s mark came in the 200-breaststroke with sophomore Jackson Madonia, lowering his own time from 2018 by two seconds to 2:11.00.

Junior Kate Flynn was the Gaels only individual winner on the women’s side, taking the 50 and 100-Free with respective times of 24.76 and 52.94.

The Gaels travel to Bryant next Saturday for a 1:00 p.m. meet in Smithfield, Rhode Island.

NEW ROCHELLE, NY – The St. Francis College Brooklyn men’s & women’s swimming and diving team concluded the Iona Quad Invitational on Saturday. The men were edged in head-to-head action against Iona. The women fell to Iona and Wagner, but came away with a victory against conference foe, Sacred Heart, in New Rochelle.

Freshman diver Matthew Bernstein also took first place in both the one meter and three meter diving events for the first time in his career.

UP NEXT:
The Terriers are back in action on Saturday, November 2, as they host Mount St. Mary’s (MD) for a 1 p.m. opening dive from the college’s Aquatic Center.

New Rochelle, NY – The Wagner College swimming and diving team swept its competition at the Iona Quad for the third straight season, earning victories over the Gaels, St. Francis Brooklyn, and Sacred Heart to move to 4-0 on the season.

Reigning Northeast Conference (NEC) Rookie of the Year Ellie Eastwood shined on the afternoon, picking up three victories, while setting a new meet record in the 200 Breast (2:23.96).

The sophomore also earned a victory in the 200 IM in 2:11.74, while combining with juniors Hande Kivanc and Megan Chiu as well as graduate student Dorian McMenemy for a win in the 400 Medley Relay (3:58.29)

Freshman Frederikke Mertins continued her strong start to the season with two second-place results, finishing just behind Eastwood in both the 200 IM (2:12.25) and 200 Breast (2:24.25) while also staying under the previous meet record in the event.

Next up, the Seahawks will travel to Central Connecticut and compete in the CCSU Invite against the Blue Devils as well as Bryant on November 1-2.

NEW ROCHELLE, N.Y.- The Sacred Heart University Swimming and Diving team concluded its quad meet at Iona this afternoon. The Pioneers fell to Wagner 164-79, edged by Saint Francis (N.Y.) 127-116 and lost to Iona 166-71. SHU returns to action on Saturday Oct. 26 when SHU competes at Stony Brook as well as face LIU. The meet begins at 12:00 p.m.

Highlights of the Day