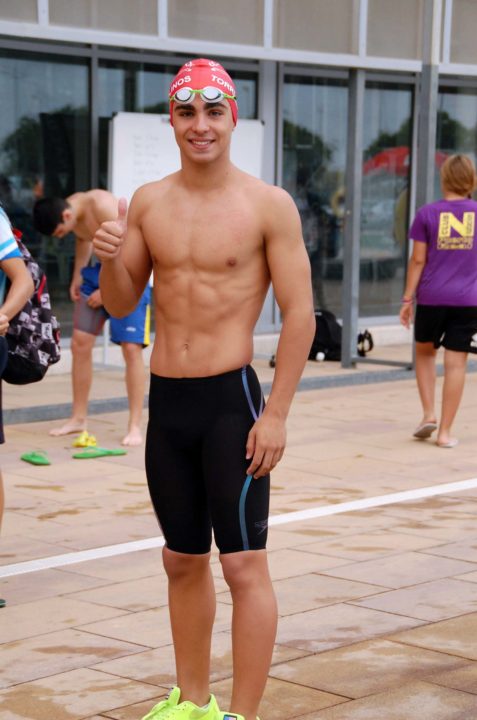 The Spaniard has only been in the U.S. for two and a half years, but now finds himself looking for a fourth school after Tiffin cut its swimming program. Archive photo via Marco Alvarez Sanchez

Erlenbach comes to the Mount with Division I and Club experience, with his most recent college coaching experience coming at the University of North Carolina.

The COVID-19 pandemic has impacted everyone financially, and we’ve seen the ripple effect enter into the world of swimming. Multiple swimming & diving programs have been cut in recent weeks, including East Carolina University doing so on May 21.

But aside from the dollars schools may be losing due to the pandemic, the lives affected in the wake of these decisions are sometimes lost. One swimmer, Spain’s Marco Alvarez Sanchez, has been impacted by programs getting cut more than most.

Alvarez Sanchez, who came over to the U.S. from his home country in December of 2017 to pursue his collegiate career, finds himself looking for a fourth school to go to in less than two and a half years.

A successful age group swimmer with C.N. Torremolinos in Málaga, Spain, Alvarez Sanchez began to consider the possibility of moving to the U.S. for university when his coach, Francisco Medina, and Medina’s wife, two-time Olympic medalist and former world champion Nina Zhivanevskaya, told him about the possibility.

“They talked to me about the American dream, how I could come to study and practice in America, and I thought it was great,” Alvarez Sanchez told SwimSwam in a phone interview.

Zhivanevskaya competed at five Olympics, representing the Unified Team in 1992, Russia in 1996, and then after marrying Medina in 1999, she wore the Spanish flag in 2000, 2004 and 2008, with Medina joining her at the Games as her coach. She won a pair of Olympic bronze medals, the 2003 World Championship title in the women’s 50 back, and also set the world record in that event back in 2000.

After getting inspiration from them, Alvarez Sanchez began taking the necessary steps in order to come over to the United States.

“I got in contact with AGM, a business that works with students here in Spain to try and help to go to colleges in America,” he said. “They helped me find Limestone.”

“I think I competed about four times with Limestone,” he said. “And then at the end of April they told the team they cut the swimming program, so we had to find a new place to go to.”

With the Limestone program being cut just a few months after he arrived, Alvarez Sanchez had to begin looking elsewhere if he wanted to keep swimming.

“My problem was that I only did one semester at Limestone, so if I transferred at that moment I wouldn’t be able to compete for the first semester (the following season),” he said. “So it was super hard for me to find a school. And then I found Barton Community College, it’s a junior college in Kansas.”

Unable to compete for the first semester because he didn’t have enough credits, Alvarez Sanchez finally got into action in two meets for Barton during the second half of the season, including the NJCAA Championships in March.

The fly/free specialist produced four top-8 finishes at the meet, including claiming sixth in the 50 fly.

With Barton being a junior college, he had to relocate once again at the conclusion of his sophomore year.

“After Nationals, it was around March, and again it was too late to find a good place to go to because before that I was unable to talk to any coach because I didn’t have time,” he said. “I wasn’t able to compete in the first semester.

“So I found Tiffin. I had a friend at Tiffin, he introduced me to the coach, he helped me to go to Tiffin. And then I signed.”

Joining Tiffin University, located in Tiffin, Ohio, for the 2019-20 campaign, Alvarez Sanchez had an instant letdown. Another transfer issue would mean he had to sit out the entire season.

“So basically with Tiffin, I didn’t compete the whole year. I was super excited at the end of this year because I was going to be able to finally start competing this year and studying and doing normal athlete things.”

Tiffin, a Division II school, announced it was cutting it’s men’s and women’s swimming programs on May 4.

Officially, head coach Lukas Jachno had resigned from his position one week prior, but the removal of the program came as a shock to Alvarez Sanchez and his teammates.

“I was really sad, honestly. I’ve been in the U.S. for two and a half years, and with three different coaches. And when I saw I had a stable place to go to, I had made some friends. I thought I was going to graduate at Tiffin.

“Now that they’ve cut the program, again, one more time, it’s the second time that it’s happened to me, I was really, really sad. I was super excited for the next year because I was going to be able, finally, to compete normally. And I couldn’t, I’m really sad. I’ve been really sad for the past month because I haven’t found anything.”

Alvarez Sanchez, who will turn 21 in June, moved back to Spain in March once the pandemic hit. That’s where he was when he heard the Tiffin news, and over the past month, he’s been getting in contact with coaches looking for yet another new home. But it’s been tough.

“I think that Tiffin made this decision at the worst time that they could, because of the situation we are in, the whole world, with the coronavirus. The economy of the people, for example in Spain, is really bad right now. I think it’s the worst time for them to make this decision.”

Spain has been one of the countries significantly impacted by COVID-19, with residents forced into a two-month lockdown where they could only leave home for groceries or to go to the pharmacy. For the past two weeks, people have been allowed to go outdoors, although on a specified schedule.

Alvarez Sanchez is desperately trying to find a program for next season, as he doesn’t want to see his swimming career end on such an abrupt and disappointing note.

“I’ve been trying to talk with coaches, I have talked with some but the scholarships that they have are really limited, I cannot afford that amount of money,” he said.

“And right now I see myself in a situation where if I don’t transfer I have to stay in Tiffin, so I will have to quit swimming because there’s no other option.”

They say, “it’s not personal”, but it is indeed. Best wishes to Marco and a college career full of happiness and success.

Hopefully Swimswam Will give us the BEST End of the History. In America everything is possible. You Will ver the BEST offer.