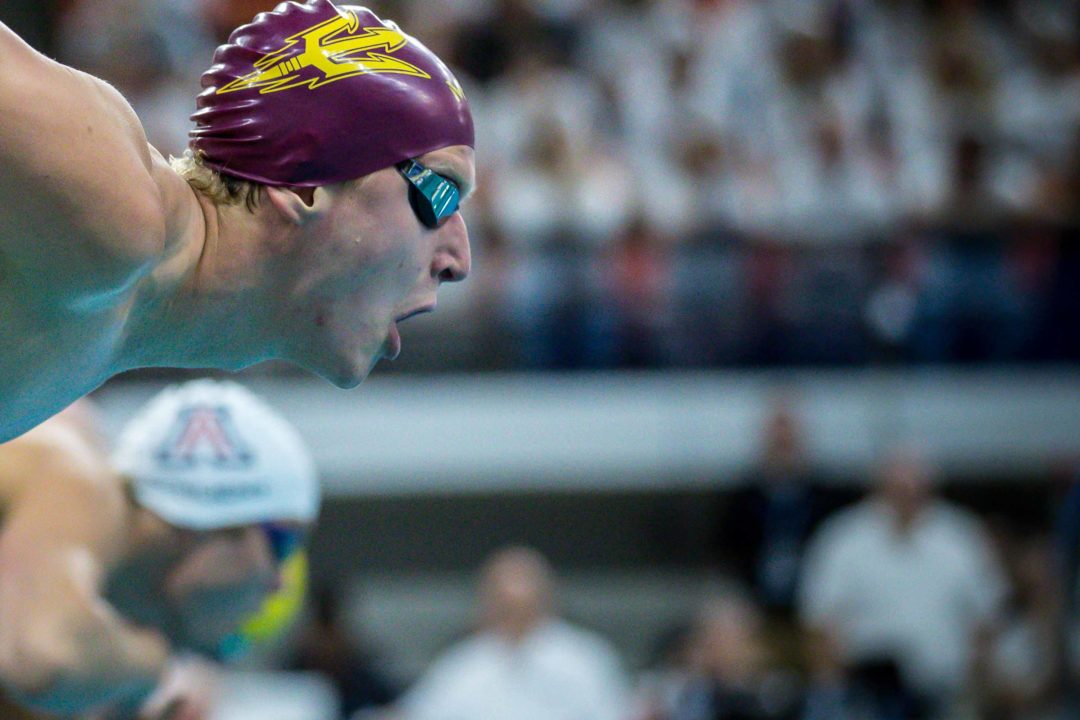 Arizona State is set to get back two key swimmers who sat out last college season to prepare for the Tokyo Olympics: All-American Grant House and Puerto Rican record-holder Jarod Arroyo. Head coach Bob Bowman confirmed to SwimSwam this week that both swimmers are planning to compete collegiately this year.

House should be a junior this season. He was an NCAA scorer in each of his first two seasons for the Sun Devils, placing 14th in the 200 free in 2018 and 10th in 2019. House is a standout freestyler and IMer, and should be a huge addition back into the ASU program.

House was also a member of the U.S. rosters for both World University Games and Pan American Games in 2019, winning relay medals in both meets.

Over his Olympic gap year, House hit a lifetime-best in the 100 free in a mid-season meet, the Pro Swim Series in Des Moines.

Arroyo would have been a freshman last season, but deferred his enrollment to focus on Puerto Rico’s Olympic preparation program. He’s a big-time prospect in the IMs and the 200 fly. He holds Puerto Rican records in the long course 200 and 400 IMs.

Arroyo’s long course times are clearly his strong suit for the time being. He hit both of those lifetime-best long course meter IMs in 2020, swimming at the Knoxville Pro Swim Series.

The two should join an Arizona State recruiting class we’d already ranked among the 25 or so best classes in the nation. That group includes 20.1/44.4 sprinter Will Rose and 15:03/4:21.5 distance swimmer Lleyton Plattel. The Sun Devils return 7 of 9 individual NCAA qualifiers from last year.

Good, Maybe the team will move-up from a 21st place finish to 20th place finish next season at NCAAs before a third of the team transfers or quits like Bowman’s last few classes. Just sayin’…

Can you name these “classes” that transferred and/or quit? Seems like they had a lot of people near the top of individual events and some relays up there. Long way to go to be Cal/Texas level but this is a good team

Asu gonna be tough this year!

There will no ncaa

Imagine if he never got that DUI.