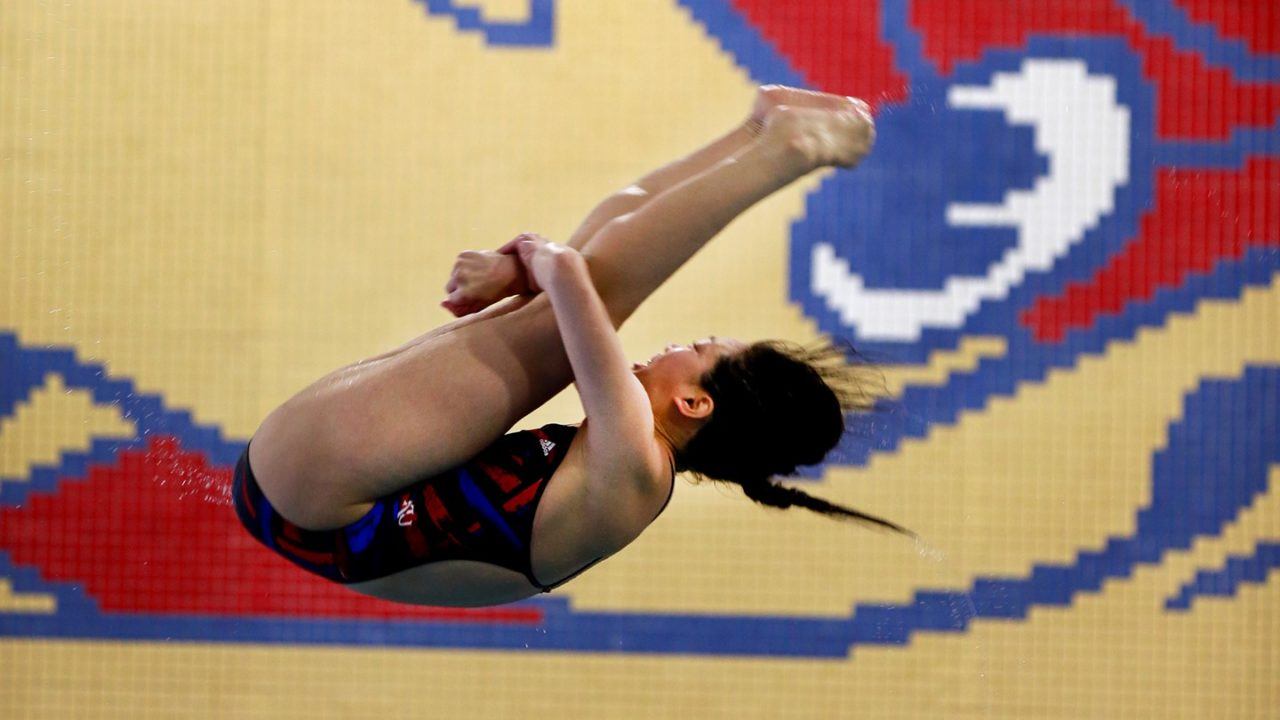 The Jayhawks won all but one event as Xu scared the NCAA 3-meter diving record. Current photo via Kansas Athletics

University of Kansas vs. Iowa State

University of Kansas diver Vicky Xu took down the Big 12, Kansas, and Robinson Natatorium records with her 3-meter board performance Saturday against Iowa State.

Xu took down the Big 12 Conference, Kansas and Robinson Natatorium records on the three-meter board with a personal-best performance of 420.60 to claim her fifth first-place finish in six events since joining the team in January.

Xu outscored her opponents by 114.22 points en route to that record-breaking performance, as Iowa State’s Sydney Ronald finished in second with a mark of 306.38.

In the pool, the Jayhawks posted a first-place finish in each of the eight events on the day and racked up 11 top-three finishes.

The meet started with a solid 200 medley relay performance from the squad of Emily Haan, Martha Haas, Wyli Erlechman and Evan Hundley, touching at 1:44.30 to finish third. Lucia Rizzo was the lone Cyclone to earn a victory in the meet, taking first in the 200 fly with a 2:03.67. The freshman also had a second-place finish in the 200 IM with a 2:08.42 Andersen claimed second in the 100 free with a 52.11. All three divers earned personal-best scores in the three-meter competition, with Sydney Ronald scoring 306.38, Dana Liva with a 304.25 and Jessica Coffin had a 217.95.

“The outcome sure wasn’t what we wanted,” head coach Duane Sorenson. “Lucia Rizzo had a really good meet for us. We had a couple people out sick, but we gave it our best effort and learned a lot of things.”

In the diving well, the Cyclone divers all had solid performances. Dana Liva and Sydney Ronald traded second and third place, Liva leading one-meter with a 259.20 and Ronald with a 254.63. In a five-meter platform exhibition, both Liva and Ronald cracked the 200 mark. Coffin set personal best scores in each event throughout the meet.

“I was really happy with the divers’ performance this weekend,” diving coach Jeff Warrick said. “Today had an exclamation point to it. I was feeling really good with how Sydney, Dana and Jessica dove. It was exciting to see them put up their best scores in the last three-meter finals.”

The Cyclones will return to action on Feb. 27 with the 2019 Big 12 Championships. Follow the team on Twitter (@CycloneSD) or on Facebook at facebook.com/cycloneSD for in-game updates, post-meet recaps and results throughout the season.