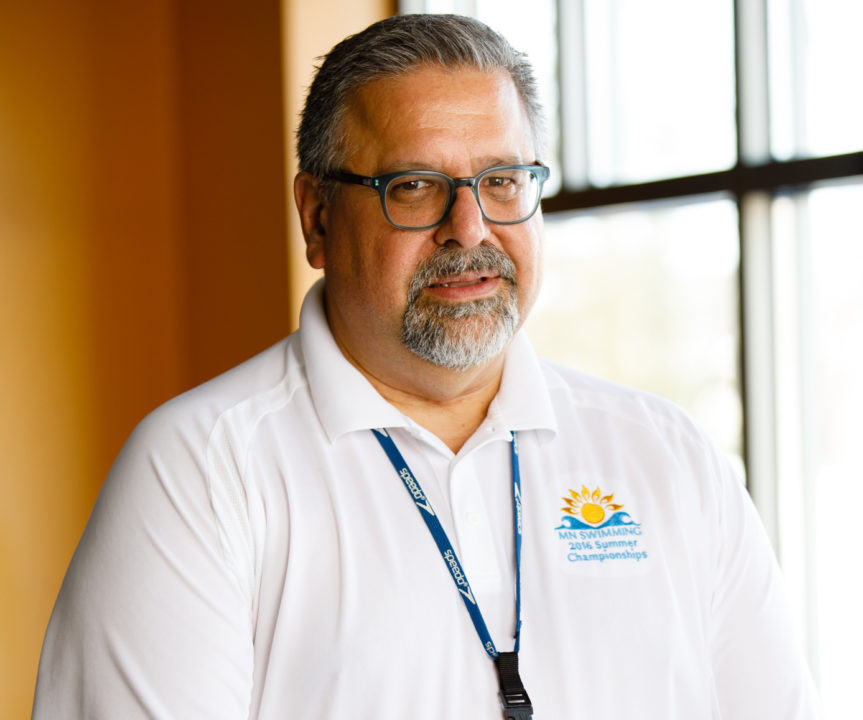 SwimSwam sat down with Bill Stephan, lifelong swimmer and veteran swim meet official to hear first hand what he and his peers are seeing when it comes to competition and swimmer safety. Current photo via Bil Stephan, Hammer Head Swim Caps

Smack Strap is a braided elastic replacement goggle strap designed to reduce pressure from the straps while ensuring goggles are comfortable and water tight.

As the competitive club season gets into full swing for spring and summer across the country, SwimSwam sat down with Bill Stephan, lifelong swimmer and veteran swim meet official to hear first hand what he and his peers are seeing when it comes to competition and swimmer safety.

SS: Some people, Bill, have said you were born into the sport of swimming. Would you say that’s true?

Oh, absolutely. I grew up in Kentucky in a swim family. There were five of us, all on the swim team. For my parents who both worked, the pool was also like day care. We’d go to practice in the mornings and spend afternoons hanging out. We also moved a lot while I was growing up. I attended maybe fifteen different schools, but always found a close, welcoming community on the swim team at every new pool, with my younger brother by my side. I’ve been involved in the sport as a swimmer, a coach at one point, and now an official at the local, regional and national levels. It’s a lifelong passion.

SS: Why did you decide to become and official and what’s life like for the men and women in the white shirts?

When my seventh grader announced he wanted to join the swim team, after being involved in other school sports, I was delighted. It’s my sport and I understand it. But after spending a few months as a spectator in the stands, I knew I wanted to be more involved. I wanted to be on the pool deck at his swim meets in the center of the action. I love it, but it’s a lot of hard work, requires a great deal of preparation and can be quite intense. At any meet from age group novice to national level, officials are exceptionally busy and carry great responsibility. We’re meeting with coaches, making preparations for the meet, dealing with paperwork for the competition in real time, starting races and making split second calls – and all the while ensuring everything is done in compliance with USA Swimming regulations. It’s stressful but incredibly rewarding. I’ve seen swimmers start from an early age and grow up on the pool deck before they head for college competition.

SS: You’ve talked before about swimmer safety. How big a concern is keeping swimmers safe for officials and coaches?

It’s a top priority for everyone now, no doubt about it. Concussion awareness has spread rapidly through every sport but think about this: no other sport is like swimming. Nothing else requires you to go as fast as you can toward a cement wall with no head protection. I personally have seen countless head strikes, collisions with the wall – particularly from backstroke finishes – and swimmer collisions too. I’ve seen blood trails in the water at busy warm meet warm ups, where another teammate kicks or elbows a swimmer in the head or face. In outdoor pools it’s an even bigger concern, where the sun and wind blowing the flags are very real factors for disorienting even experienced swimmers.

SS: What can be done to improve head safety?

Firstly, it’s critical to protect swimmers, particularly age group athletes. Their brains are still developing and growing, so kids can be particularly susceptible to head injury in environments where collisions most commonly occur.

Despite our best efforts, it’s difficult for officials and coaches to see everything going on in the water across eight busy lanes of 250 or so athletes. During warm ups when accidents can occur, officials are required to meet with coaches and lane timers about the running of the meet, so supervision of swimmers could be limited. There has been discussion about certifying meet marshalls and other volunteers in swimmer safety, but these kinds of initiatives take time to implement across thousands of pools nationally. USA Swimming introduced CPT (Concussion Protocol Training) to all states, which points to the growing need for head protection in the pool. All but a handful of states now require officials, coaches and poolside volunteers to test out for CPT and parents are required to sign an annual release form acknowledging the risks associated with swimming – just like every other youth sport. In the meantime, we really need to protect swimmers in the water.

Yes. I became aware of the Hammer Head® cap over two years ago and have had an opportunity to see it, try it and test it. I’ve shown it to fellow officials and they really believe it can help protect athletes and young swimmers alike. The cap includes a layer of patented honeycomb material inside that is designed to absorb and dissipate the shock of impact when collisions occur. The really interesting thing about our sport adopting this is not asking athletes to do anything they’re not already doing.  Every swimmer already wears a cap. No behavioral or regulatory change is needed and every swimmer will be protected. In addition to the safety element, this cap has a wrinkle-free fit for maximum comfort and zero drag plus the single compression molded cap and premium silicone offers durability that is designed to outlast other caps. It’s an easy win for the sport. Decades ago swimmers swam without goggles. That seems insane now. I think the Hammer Head cap is going to really change our sport for the better.

Hammer Head® Swim Caps is a patented and trademarked product of Mako International LLC, co-founded by David Burns, a 20-year swim coach and swim school owner, and Theresa Finn, a sports brand marketing and business development executive with a manufacturing background. The Hammer Head Swim Cap is the world’s only protective swim cap and has been endorsed by Rowdy Gaines and ASCA (American Swimming Coaches Association). It incorporates patented HIT Honeycomb Impact Technology® designed to reduce injuries from unexpected head strikes with other swimmers or the pool wall. In addition TEKFIT® wrinkle-free surface gives racers a cap that is both comfortable and fast. It also gives parents a cap with greater value, built with strength and durability. Practice in it. Compete in it. Win in it.