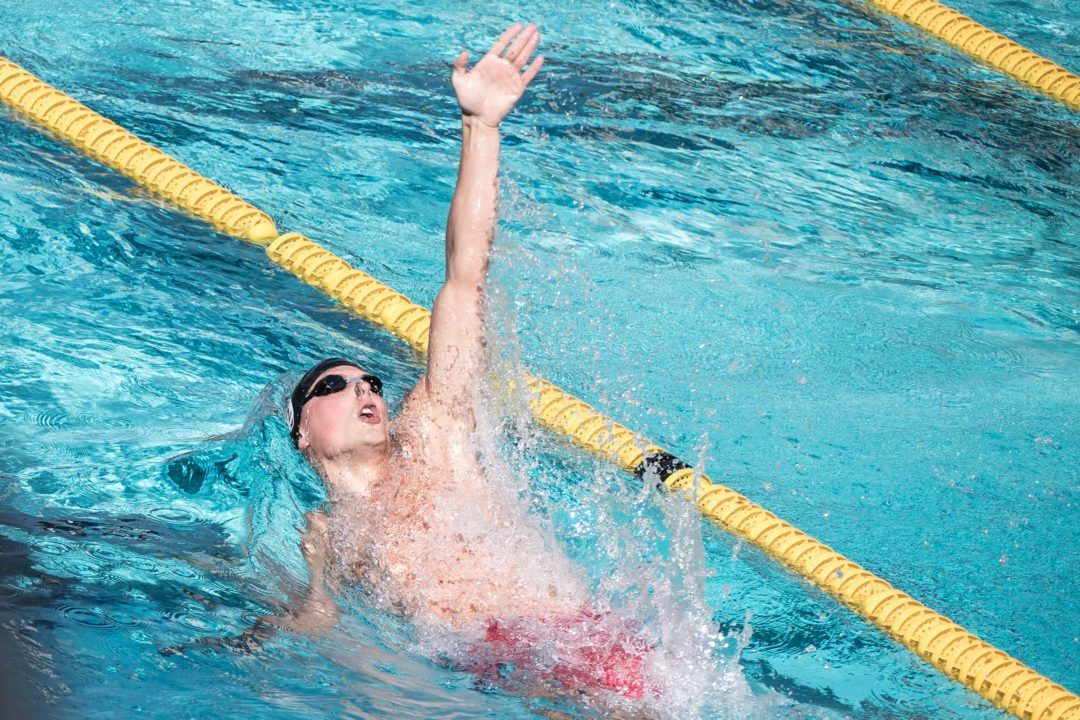 The Utes capped off their season with a victory over the Trojan men, who were without All-Americans Carter, Condorelli, Mulcare, and Tribuntsov. Archive photo via Mike Lewis/Ola Vista Photography

The Utah men pulled off an upset on senior day to close out the regular dual meet season. Utah topped Pac-12 rival USC by 20 points on Saturday. Notably, the Trojans were without a handful of their All-Americans, including one of their big scorers: Dylan Carter. Also absent were Santo Condorelli, Ralf Tribuntsov, and Patrick Mulcare. According to USC’s press release, the 4 men stayed in Los Angeles to train over the weekend.

SALT LAKE CITY – The Utah men’s swimming team capped an amazing Senior Day at Ute Natatorium with a 141-121 victory over No. 8 USC on Saturday

The upperclassmen set the tone as Jack Burton, Ben Scott and Paul Ungur teamed with Rodolfo Moreira to win the 200 medley relay in 1:28.81, a new pool record.

The 1000 free was captured by another Ute, Matteo Sogne, in 9:22.69, and Liam O’Haimhirgin won the 50 free in 20.38. The day ended with Ungur putting an exclamation mark on the meet in the 400 free relay with O’Haimhirgin, Austin Phillips and Felix Chiun. The quartet won the event with a time of 2:56.17

The Utes now have next weekend off before the Pac-12 Men’s Swimming Championships, Feb. 28 – Mar. 3, at the Weyerhaeuser King Co. Aquatic Center in Federal Way, Wash.

Junior Alex Valente and freshman Robert Glintaeach won twice among seven Trojan race wins, but the USC swim team, with four key swimmers back in L.A. to train, fell at Utah, 141-121, in the regular season finale in Salt Lake City on Saturday (Feb. 17).

Junior Billy Monjay was second in the 200y breast and third in the 100y breast. Freshman Max Statham posted a pair of thirds in the 500y and 1000y free while senior Jon Knox did the same in the 100y and 200y back.

USC, which raced without seniors Dylan Carter, Santo Conodrelli and Ralf Tribuntsov as well as junior Patrick Mulcare, was second in both the 200y medley and 400y free relays.

Man Coach Dr Salo is having a tough go of it. BUT the mighty Trojans will snap back as they are time tested and pliable.