USC Suits Up to Swim Four NCAA-Leading Relays Against Arizona 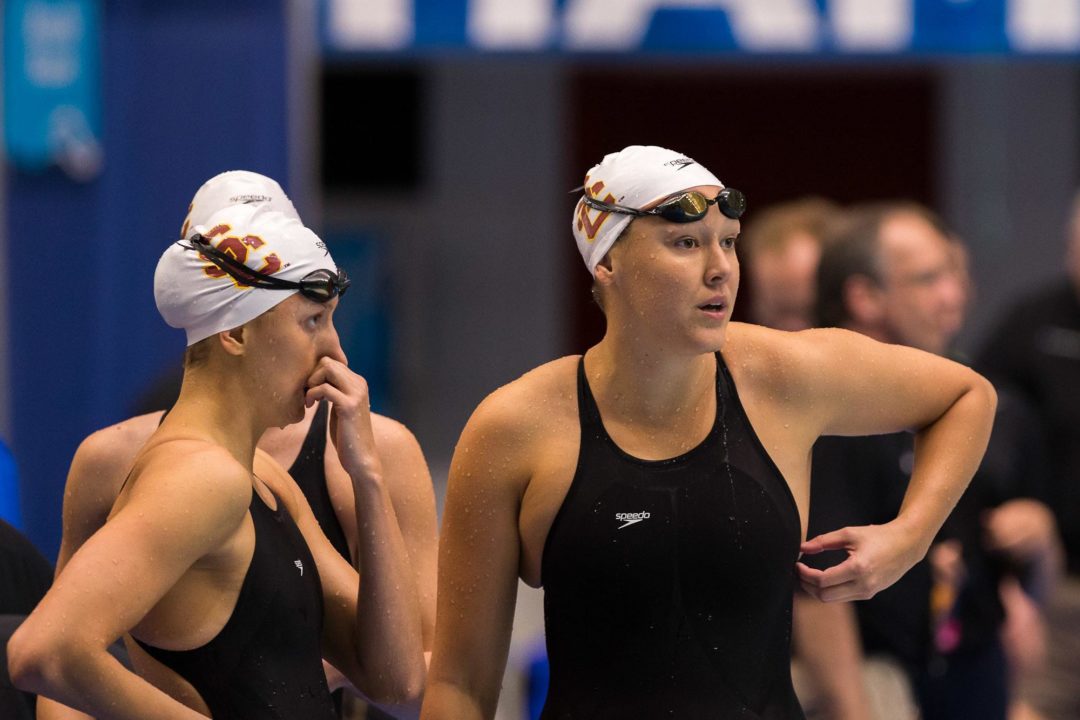 The USC women, led by Kasey Carlson, and the USC men all went nation-leading relay times against Arizona on Saturday. Archive photo via Tim Binning/TheSwimPictures.com

The USC men and women swept the Arizona Wildcats in relatively easy fashion, with the Trojan men outscoring Arizona 172-128, and the USC women won 167-133, with no exhibitions to muddy the final numbers.

Though USC overwhelmed in the team scoring, both teams had their fair share of strong performances.

The USC women began the meet with a 1:38.30-1:41.51 win over Arizona, with the winning team being Kendyl Stewart, Kasey Carlson, Jasmine Tosky, and Kasia Wilk. That relay included some really impressive splits, including a 27.1 breaststroke leg from Carlson and a 22.1 anchor from the sophomore Wilk. That time gave USC the #1 ranking in the country by over a second-and-a-half, breaking a tie between Georgia and Stanford. Arizona’s time was just .01 seconds off of their season-best as well.

Note that Arizona continues to skip Geer as the anchor on that relay, but it probably wouldn’t have mattered with how well Wilk swam on the anchor.

Wildcat sophomore Bonnie Brandon continued to be on a roll, sweeping three individual events with very little challenge in any of those three. First she won the 1000 free in 10:04.50, a ten-second advantage over USC’s Lynette Lim; then picked up a very good 1:56.72, two seconds better than USC’s Joanna Stenkvist; and her third win came in the 500 free where she swam a 4:49.56, five seconds ahead of USC’s Chelsea Chenault (4:54.19).

After a very good freshman year, Brandon has progressed even further this year. Her only loss this season so far in an individual event is the 200 free in the meet opener against UNLV, and that was to teammate Margo Geer. In total, she’s 11-1 through four meets.

USC held serve in all three of those events, though, despite the Arizona wins, by going at least 2-3-4 in each of those races.

In the races that USC won, however, they had depth as well, which is where much of the difference came in the final team scoring. Kendyl Stewart took the 100 back in 54.90, followed by her classmate Stenkvist in 55.50 before Arizona’s Alana Pazevic broke things up by taking 3rd in 56.14. That’s a 14-5 advantage in the event.

Wilk’s 50 is certainly coming around much quicker than her 100, but even in the individual she wasn’t nearly as good as that relay split. She was a 23.39 for 2nd, again behind Geer who was really fast in 25.57. She’s the defending NCAA Champion in the event, and now ranks tied for 4th in the country this year.

Ending the meet in the 400 free relay, USC won again, and even with Geer and Brandon swimming for the Wildcats, USC went 1-2 in the relay. The Trojans’ A relay was a 3:16.61, which is the best time in the country by three seconds this year. Their B relay was a 3:19.32, the second best time in the country this year. Arizona took 3rd in 3:19.57, meaning that only USC has been better than them this season, and they were still only 3rd in this race.

Both sets of USC relays were suited up, partially but not fully explaining those times.

Arizona’s A and D relays, however, were both DQ’ed. They probably wouldn’t have won, but thanks to a 20.49 fly split from Giles Smith, they would have probably placed 2nd.

The USC men took the win despite swimming with heavy-hearts for their teammate Jack Wagner. He missed the meet while attending the funeral of his 27-year old sister, who passed away after a battle with cancer.

Neither team has a spectacular distance group, but in the meet’s first individual race, USC’s guys extended their lead even further with another 1-2 finish. Ted Singley won the 1000 free in 9:21.28, and his teammate Cary Wright was 2nd in 9:21.44. Those were season-bests for both swimmers.

The Trojans’ event-winning streak ran one further, was Luca Spinazzola took the men’s 100 back in 47.84 ahead of Arizona’s Mitchell Friedemann in 47.92. Spinazzola had a breakout season last year, and is one of the key’s to USC’s success this year as he is by far the team’s best backstroker this season. His time from Friday’s meet against Arizona State leads the nation.

In the 100 breaststroke, Arizona’s men made a big statement with a 1-2-3 finish from junior Kevin Cordes (53.96), senior Kevin Steel (55.68), and sophomore Andrew Sovero (55.69). That topped USC’s best finisher, Morten Klarskov, who was 4th in 56.09. That swim by Cordes is the best time in the country this year, but Steel’s result might be even more significant for the Wildcats. After a rough start to his senior year, that’s easily his best time in the 2013-2014 season (by 2.2 seconds, to be precise).

Smith, in his first individual race after that great relay split, became just the second swimmer in the Pac 12 to break 20 seconds in the 50 free this season with a 19.99 to win the 50 free. USC freshman Santo Condorelli took 2nd in 20.42, with Maclin Davis 3rd in 20.63. The Trojans are looking to replace what they lost in those sprints with Vlad Morozov’s graduation, and those two are going to be the key to that goal this season.

USC went 1-2 in the 100 free coming out of the diving break, with Dimitri Colupaev winning in 44.11 and Condorelli 2nd in 44.90. USC, even in their middle-distance group, is showing a lot more speed this year than last year, which should also help cover for Vlad. Arizona’s Renny Richmond was 3rd in 46.16.

Arizona’s Michael Sheppard took the 200 back in 1:47.47, followed by USC’s Wright in 1:48.42. Spinazzola, winner of the 100 back, is a very good 200 backstroker, but he hasn’t swum that race this season, instead focusing more on other sprint races.

Closing the meet, both teams were absolutely on-fire in the 400 free relay, and USC’s men, just like their women, had an almost silly time for this early in the season, with a 2:54.39. Cristian Quintero (44.15), Santo Condorelli (43.74), Dimitri Colupaev (42.68), and Michael Domagala (43.82) combined for another nation-leading time. They beat Arizona by almost five seconds, even though Arizona’s relay looked pretty good, including a 44.42 lead-off from Smith.

USC goes into a bit of hibernation now before the Texas Invite on the first weekend in December; Arizona will be at that meet as well, but their women have a dual with Boise State first as well on November 23rd.

the Trojans freestyle group right now is really good. yes, vlad is gone, but condorelli + domagala will replace him. 42.6 for Colupaev???? could he split 40?

How do these girls&guys swim so much faster on relays than they do in individual events? It just doesn’t make sense to me. A suit doesn’t make THAT big of a difference if anything at all. I mean come on, Wilk going a 51 individually but leading off the relay in 49? That doesn’t translate in my mind.

I could be wrong but I would assume if they suited up for relays, they were probably suited up the entire meet. But hey, nothing gets you in the mood to swim fast like a relay against a conference rival.

Suits do make a huge difference, not only mentally, but the compression reduces muscle fatigue which is always a big factor for in season swims.

Only a few individual swims were suited up. Most of team and events in workout suits.