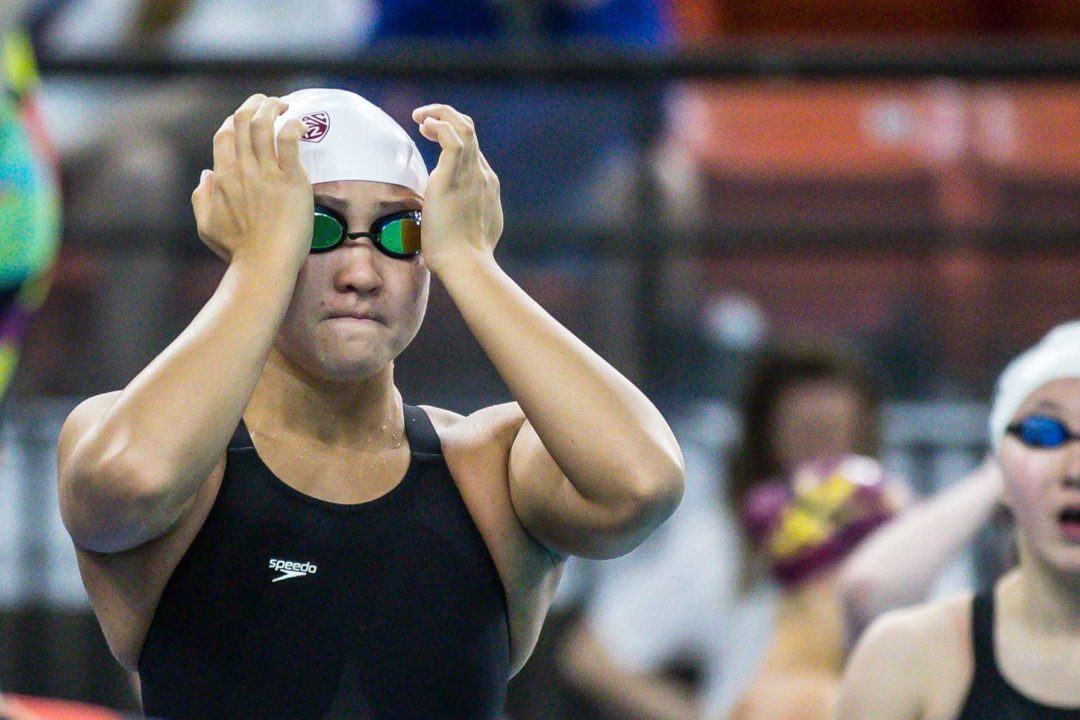 For Sanchez, the biggest heartbreak was not being able to see her teammates compete one final time at the NCAA Championships. Archive photo via Jack Spitser/Spitser Photography

We’re continuing to hear from NCAA athletes who had their careers cut short due to the coronavirus outbreak, and USC’s Catherine Sanchez is the latest to release a lengthy statement on the matter.

Sanchez, a Trojan senior who was entering her fourth consecutive NCAA Championships, was devastated by the news that the biggest meet of the season was cancelled. But she was hit harder by the fact she didn’t get to see her teammates compete in Athens rather than herself.

“There was something really special about this team,” she continued. “There was this calm confidence we had while preparing for NCAAs. It was the most confidence I had in myself and in my team going into the championship meets.

“All throughout Pac-12s there was a team camaraderie unlike any other I have experienced. We were all selflessly swimming for each other I think our small team helped us become unified as one — we called ourselves small, but mighty. And man, we were mighty.”

In addition to not being able to see her team compete, it was also an unceremonious end to Dave Salo‘s collegiate coaching career, as the 14-season veteran announced he would step down from his duties with the program at the end of the season.

“This is what I am devastated by,” Sanchez said. “That I did not get to see what was left in the tank for our team, to not finish out Dave’s USC coaching career in the way he or any of us wanted. We knew as one team what we were capable of and what could have been and, although it’s awful that we could not finish out as we wished, our performance at Pac-12s and our team unity was far beyond anything I could have wished for.”

The USC women were coming off a third-place finish at the Pac-12 Championships at the end of February, with Sanchez placing eighth and ninth overall respectively in the 100 and 200 fly. She was seeded 27th in the 200 on the NCAA psych sheets.

Amid the difficulties, the Covina, Calif., native manages to find the positives out of the situation.

“On a personal side, it’s odd, but there is something kind of sweet in not knowing what was your last race and wondering what could have been,” she said. “My last race ended up being one of my most memorable race days and there was no frustration in my performance because I thought NCAAs was going to be my final swim.”

On the last day of Pac-12s, Sanchez ended up swimming three 200 flys, losing a swim-off after tying for eighth in the prelims. Her swim-off showing was her fastest of the three races (1:56.66), and she went on to win the B-final at night.

“Additionally, I have come to appreciate the NCAAs I did get to attend and how much I enjoyed them,” she added. “I was invited to NCAAs every year and that is something that cannot be taken away from me. I am really proud of what I was able to accomplish as a member of the USC Women’s Swim & Dive Team. It can be hard to find the silver linings in a situation like this, but there is so much beauty in them when they are found.

“I am excited to see what is in store for the Women of Troy next year. This bittersweet ending has made me lean into the USC Swim & Dive family, the coaches, and the future of the team even more. They will always have my love and support. Fight on!”

Other athletes who have commented publicly after their careers were cut short by the coronavirus outbreak include Texas’ Maxime Rooney, who made a post on his personal blog, and NC State’s Coleman Stewart, who appeared on SwimSwam’s Swimming From Home Talk Show with Coleman Hodges.

On March 18, news came out that the NCAA would likely not be giving an extra year of eligibility to athletes competing in winter sports (including swimming & diving) who had their championship seasons cut short. The spring athletes, however, will be granted an extra year.