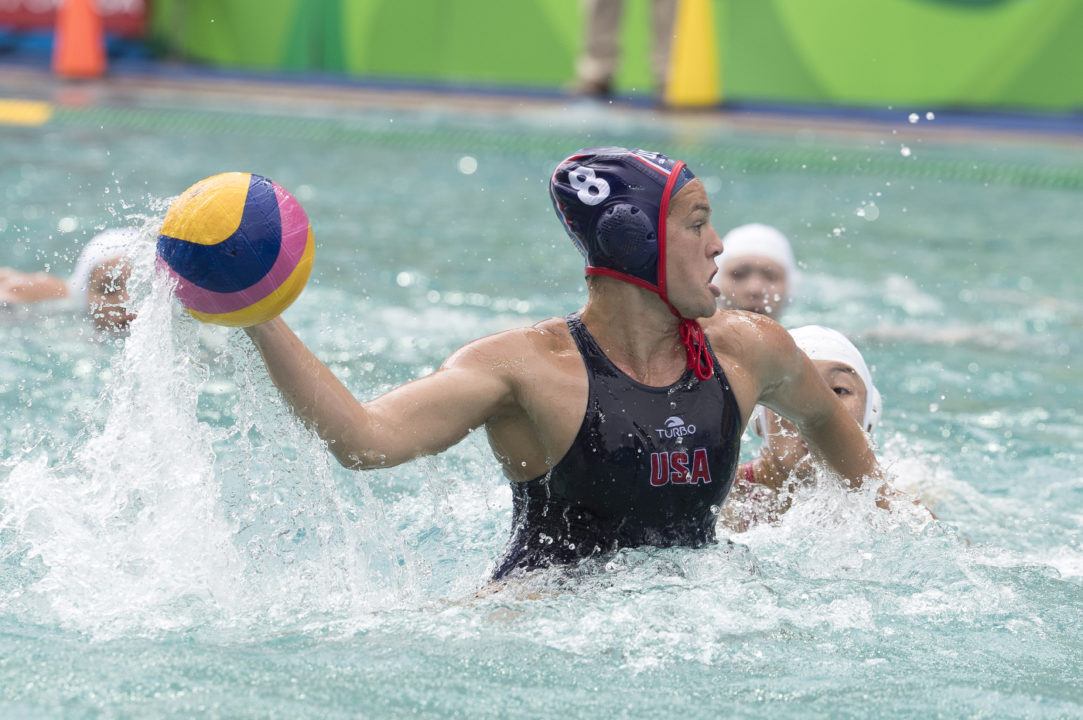 The U.S. defeated Hungary and will contest the gold medal final against Italy on Friday. Current photo via Jeff Cable/USAWP

The U.S. Olympic Women’s Water Polo Team continued to mow down every team in its path to Olympic gold on Wednesday with a 14-10 downing of Hungary in the semifinals at the Olympic Aquatics Stadium in Rio. After an undefeated record in pool play, the Americans moved through the quarterfinals, and then the semifinals, to give themselves the opportunity to defend their 2012 Olympic gold medal in Rio.

Rachel Fattal won the swimoff to open the second period; she then nailed a superb goal from beyond 5 meters to put the U.S. up 4-2. Hungary’s Barbara Bujka took advantage of a power play to make the score 4-3 with 6:51 left in the half. 30 seconds later Courtney Mathewson drilled one past Hungarian goalkeeper Orsolya Kaso, after first having to control the ball which hit her shoulder. Maddie Musselman added two more in quick succession for the Americans, and the score was 7-3 with 4:16 to go. Hungary narrowed their deficit with a backhanded shot from Bujka that went right over U.S. goalkeeper Ashleigh Johnson’s shoulder. It was Bujka’s 12th goal of the tournament, from 16 shots. The U.S. missed the opportunity to score on a power play but pulled in the rebound. Kaleigh Gilchrist then scored to put the U.S. up 8-4 with 3:06 left on the clock. Hungary captain Rita Keszthelyi nailed one into the top corner of the net after a Makenzie Fischer exclusion for her 9th goal of the tournament. After a couple of failed attempts to add to the score by both sides, the teams retreated for halftime with the score standing at 8-5 to the U.S.

Hungary scored right away in the third quarter, on a Keszthelyi shot, to pull within 2 points of the U.S., but it was the closest they would get. Hungary allowed the U.S. to come back quickly when Steffens scored with 6:25 left to play in the third. After a Hungarian turnover, Kiley Neushul netted a pass from Gilchrist and the U.S. moved to a 10-6 lead. A shot from Bujka bounded into Johnson’s hands, the U.S. turned over the ball, Hungary missed an opportunity, and then Steffens took a pass from Mathewson and backhanded it into the net. Hungary brought in goalkeeper Edina Gangl, and a minute later Keszthelyi found the back of the net on a power play, tallying her third goal of the game. Tami Craig took a pass and immediately backhanded it in to give the U.S. a 12-7 lead with just over 2 minutes left in the third. Kisteleki took advantage of a power play to nail a stunning left-handed strike past Johnson. At the end of the third quarter the U.S. led 12-8.

Hungary had the first possession in the fourth quarter but couldn’t get past Johnson, as the crowd chanted “Ashleigh! Ashleigh! Ashleigh!” Neushul scored first to put the U.S. up 13-8 with 6:21 left. After an exclusion foul against Steffens, Dora Antal took a shot that hit the bar and resulted in a corner throw for Hungary. They kept possession but were forced out wide by the U.S. defense and couldn’t get a shot off. Fischer picked up her third exclusion foul with 3:30 left. Bujka took advantage to drill one toward Johnson, but the U.S. goalkeeper had a great save, keeping the ball from touching the ropes. Hungary scored on a strong strike from Dora Czigany with 2:32 left in the quarter. Steffens bounced one in, scored her fourth goal for the U.S. on a power play with 1:57 left to play. Hungary’s Anna Illes let go a long range shot at 1:30 but it landed in Johnson’s hands. U.S. head coach Adam Krikorian called his last timeout with 1:26 left to play. A Hungarian exclusion foul gave the U.S. one more chance to score but the shot clock ran out. Attila Biro called a timout for Hungary with 41 seconds left to play. Keszthelyi bounced one off the surface right past Johnson with 18 seconds to go, but the clock ran out and the U.S. got the victory, 14-10.

Hungary gave the U.S. their toughest match of the tournament; they were the first to score double digits. But the Americans’ consistency proved too much for Hungary. They will now face the Russian Federation for bronze, while the United States will contest the gold medal against Italy on Friday.

Adam Krikorian commented, “We were complete offensively and complete in terms of our effort. We didn’t lose focus but I do think we could have done a better job defensively. We haven’t given up 10 goals in a long time. Hungary is a great offensive team so we knew it was going to be a challenge but I wish we could have done a little better job defensively.
[Barbara Bujka is] an excellent player and really dangerous. We knew going in that we would have to pay extra attention to her when we were on defense. We wanted to make things difficult for her as much as possible. We were fortunate that she picked up a couple of fouls early on. That made us change the game-plan and start attacking her a little more.
“Besides us [Italy] have obviously been the hottest team in this tournament. I watched a little bit of their semifinal and I saw how well they were shooting the ball from the outside. Their defense has been really good and their goalie is playing fantastic. It’s going to be a heck of a battle and we are going to have our hands full. No doubt about that.”