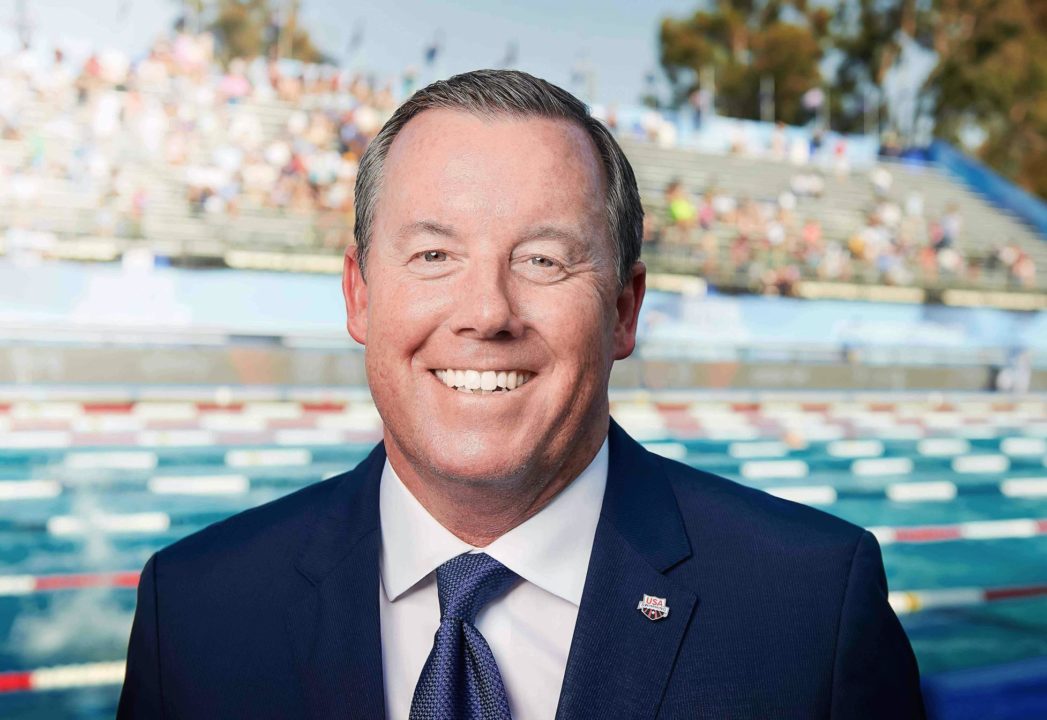 USA Swimming CEO Tim Hinchey signed a four-year extension to his contract, and will lead the organization through at least 2025. Archive photo via Mike Lewis/Ola Vista Photography

USA Swimming CEO Tim Hinchey signed a four-year extension to his contract, and will lead the organization through at least 2025.

The Tokyo Olympics last summer were set to be Hinchey’s first as head of the organization, but the coronavirus pandemic delayed the Olympics by a full year. Now, Hinchey is in line to head USA Swimming through at least two Olympics: the Tokyo Games (now in 2021) and the 2024 Paris Olympics.

The extension gives a clearer picture of Hinchey’s timeline with the organization after he appeared on the SwimSwam Podcast last month saying he didn’t expect to lead USA Swimming for as long as Wielgus did. You can see that interview here:

COLORADO SPRINGS, Colo. – USA Swimming, the national governing body for the sport of swimming in the United States, today announced that its Board of Directors has agreed with President & Chief Executive Officer (CEO) Tim Hinchey III to extend the term of his employment agreement through 2025.

“As a lifelong swimmer, Tim’s passion for the sport, coupled with his professional experience and successful track record, made him the perfect candidate for this role, and that remains true,” USA Swimming Board of Directors Chair Bob Vincent said. “In his short tenure, Tim has strategically re-envisioned and re-aligned the organization’s focus, relationship with its members and most importantly prioritized the health and wellbeing of its athletes. Never has the organization been so experienced, nimble and well-placed to address the current challenges withing the youth sports landscape and unique Olympic quadrennial.”

USA Swimming Board of Directors Athlete Representative and 12-time Olympic medalist Natalie Coughlin Hall added: “Tim has been a tremendous sounding board and advocate for athletes since stepping into the leadership role at USA Swimming. I am appreciative of his focused efforts to create new opportunities for the sport’s top swimmers, while also ensuring that additional targeted programs and funds are available at the grassroots level to introduce new children and families to this life-changing sport.”

Since joining USA Swimming in 2017, the veteran sports executive rang in an era of important change and expansion within the leading NGB. From the creation of a gender-equal leadership team, to the implementation of effective succession planning of a long-tenured staff, Hinchey ensured that the organization would be well-placed to lead in the current environment while also enhancing decades of work, which has made USA Swimming the number one swimming nation in the world since 1960.

“I’m humbled and truly appreciative of the Board of Directors’ support of our organization’s work these last four years and their confidence in my vision for the future,” Hinchey said. “I continue to relish this opportunity that allows me to work in a sport I love, alongside the world’s greatest athletes, coaches and volunteers. It has certainly been a remarkable and unpredictable journey since July 2017, but I am confident in knowing that the organization is brimming with incredibly skilled and talented people who will help drive our future success.”

Following his introductory 100-day listening tour within the community, Hinchey drafted his long-term vision, which helped drive many of the successful initiatives over the last four years. This also included the important implementation of an athlete-first culture change.

Hinchey made the health, safety and wellbeing of all athletes a priority. Under his tenure, the organization further developed its long-standing Safe Sport program, launched the Safe Sport Recognized Club initiative, and continues to drive the Board of Director’s $5M Keeping Athletes First (KAF) plan. Planning and development is also underway for the critical roll-out of online member registration (OMR), an important prong of the KAF plan.

Other changes have focused on several main areas including an ongoing digital transformation of the organization’s outwardly facing and internally operating platforms, a commercialization of national-level meets, enhanced direct communication with a membership of 400,000 individuals from coast-to-coast, and improved programs and initiatives for athletes and coaches. These changes have included the relaunch of usaswimming.org, the development of a Customer Relationship Management (CRM) system, the professionalization of the Phillips 66 National Championships and the TYR Pro Swim Series, the launch of a National Team mental health initiative and a first of its kind insurance program for member coaches.

The USA Swimming Foundation was also restructured, with Hinchey laying the groundwork for an active fundraising Board of Directors and sourcing the appointment of executives with established philanthropic expertise, among other things. In the last year alone, during an incredibly critical time, the Foundation donated more to USA Swimming clubs than ever before.

Hinchey’s most affirming leadership action came in 2020 as he navigated the NGB through the unprecedented COVID-19 global pandemic, further positioning USA Swimming as a leader within the Olympic Movement while simultaneously shifting all staffing and resources to athlete, member and club support. His strong fiscal management and ability to lead under pressure will serve the organization well as it readies itself to rebound in 2021 and beyond.

How about the board look into Lucinda McRoberts??!! She’s making mid six figures, moved to Missouri, only works half time now. Hasn’t take a pay cut, hasn’ told the staff… guess being Hinchey’s favorite pays off big time!

You’re right on the money. Lucinda needs to go. The membership and clubs paid dearly for the bad legal advice from the Bryan Cave law firm (formerly Holme, Robert & Owen). She was hired by USA Swimming away from Bryan Cave.

Attorneys are expensive. Hopefully she is saving them on paying for outside counsel.

Like Jalen Rose always says, keep collecting those checks. As for pay they have a board that needs to approve that, but would be interesting to see if there were adjustments either way.

Did he take a pay cut? Membership is way down he should reduce is pay.

Has the board addressed why Murray Stephens and Dick Shoulberg haven’t joined their buddies, Rick Curl, Mitch Ivey and Joe Bernal on the Safesport banned list?

Tell us what Dick & Murray have done?

Well… On Murray all you have to do is ask Bob Bowman, Tom Hines or one of the former female Olympic swimmers that Murray had an on deck incident with in Indianapolis where he had to be restrained by none other than John Leonard. On Dick Shoulberg, do a Google search and there are plenty of articles about his actions. As bad as those articles are, they don’t come close to describing what really happened. I’ve actually read the discovery in the lawsuit and it’s chilling. I understand why Germantown Academy didn’t want some of those details of Shoulberg’s narcissistic abuse to get out into the public eye.