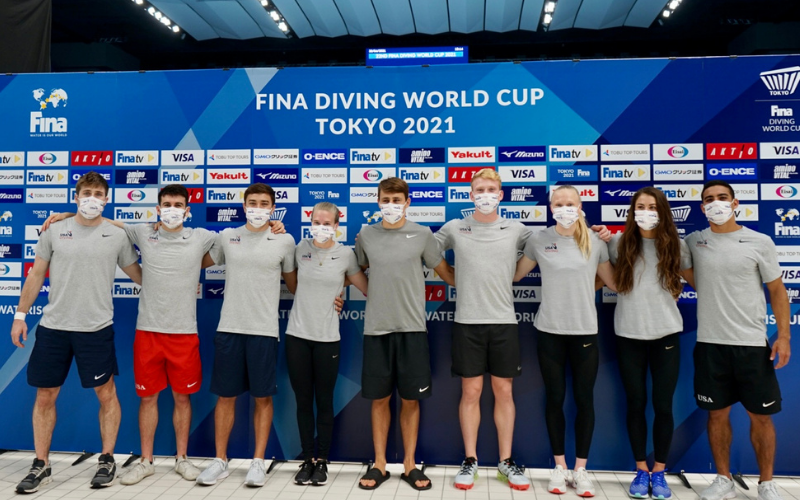 The group will dive in Japan amid a third State of Emergency as new coronavirus cases in the Olympic host city are rising. Current photo via USA Diving

Krysta Palmer and Alison Gibson secured the first of 11 U.S. Diving Olympic Team berths on the first night of finals at the 2020 Olympic Team Trials-Diving.

USA Diving has announced a roster of 9 athletes who have traveled to Tokyo, Japan this week to compete in the FINA Diving World Cup. The trip comes as some countries, including notably Australia, have pulled out of the event over coronavirus concerns, though FINA and Olympic organizers have not yet ceded to that pressure to replan the event.

This Tokyo World Cup stop is the last opportunity to secure open spots for the Olympic Games. The Americans are still seeking to qualify for 5 spots

“We are excited to be here in Tokyo and to be able to experience the Olympic Venue first-hand,” said USA Diving’s High-Performance Director, Dan Laak, “Our athletes have come to this event determined to represent their country and do their best to ensure we can send a full team back to Tokyo this summer. I am extremely proud of the focus and resolve our athletes have shown this week and am looking forward to seeing what we do throughout the competition.”

Japan declared a third State of Emergency in Tokyo earlier this week amid a rise in coronavirus cases.

The full competition will be broadcast in the United States on the Olympic Channel (schedule below in Eastern Time).

Does anyone know how many spots each country already has on each event? I understand that if a country already qualified on that event and said country gets top 4 then it will go to the next place etc.

FINA unfortunately doesn’t put forth a public tracking, so the best place to see is Wikipedia: https://en.wikipedia.org/wiki/Diving_at_the_2020_Summer_Olympics_%E2%80%93_Qualification

That data is up to date as far as public information.