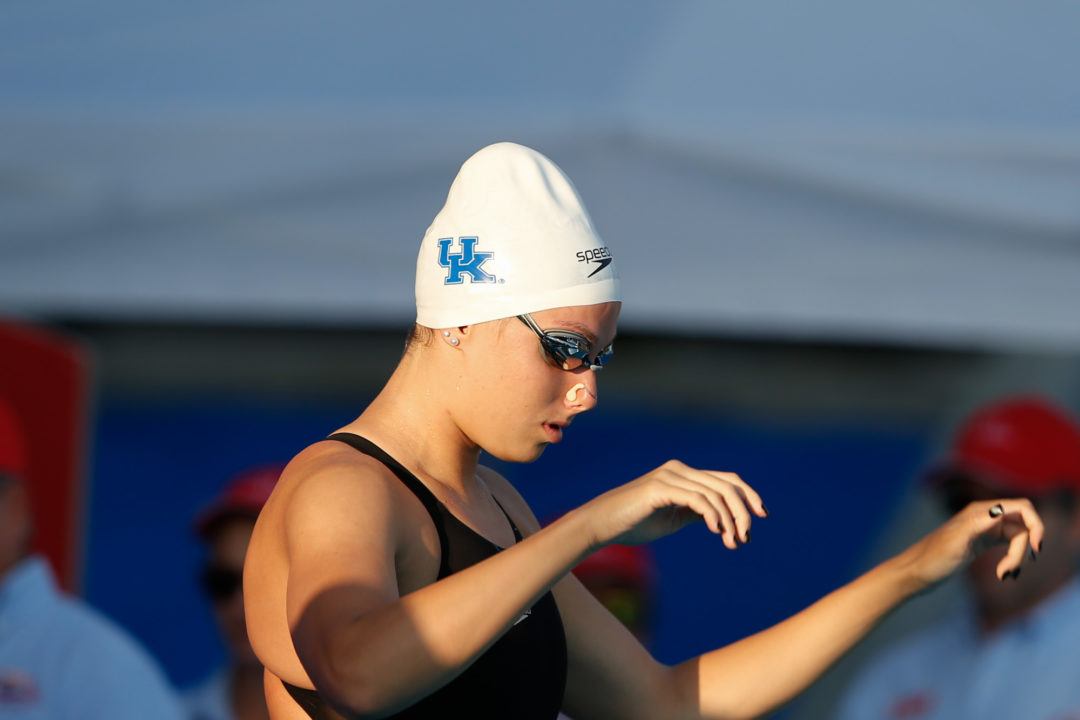 Three days after placing 8th in the U.S. National 200 back final, Ali Galyer has been named to New Zealand's team for the Pan Pacific Championships, as the NCAA standout will switch her sporting citizenship. Archive photo via Tim Binning/TheSwimPictures.com 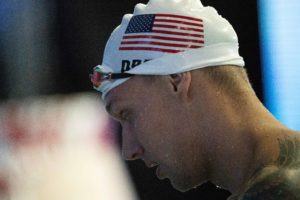 Three days after placing 8th in the U.S. National 200 back final, Ali Galyer has been named to New Zealand’s team for the 2018 Pan Pacific Championships. This will officially set her sporting citizenship to New Zealand, among at least 3 choices, and she would now have to complete the mandatory year-in-residence before switching back to the United States.

Galyer was 8th in the 200 back this week in  Irvine, California at the U.S. National Championships, swimming 2:09.77 in prelims and 2:10.91 in finals, with the prelims standing as her career-best. She sits 28th in the world ranks, though many of those above her won’t be competing at Pan Pacs.

She becomes the 6th Kiwi heading to the meet, joining 5 who qualified via the country’s prior two-stage qualifying system of the Commonwealth Games and the New Zealand Open National Championships.

Galyer trains at the University of Kentucky, where she will be a junior when the season opens in the fall. She is a three-time NCAA First Team All-American, having earned the honor in the 200 back as both a freshman and a sophomore, and in the 800 free relay as a freshman as well. She placed 3rd at last year’s SEC Championships in the 200 backstroke as well.

With the addition of Galyer to the likes of Carina Doyle and a young crop of freestylers, the country now has the foundations of an 800 free relay that could earn a finals berth by Tokyo.

Galyer will be eligible to represent the country at the 2020 Summer Olympics, which will happen at the conclusion of her senior year at Kentucky.

Swimming New Zealand would like to formally announce Ali Galyer has committed to representing New Zealand and has been selected for the upcoming Pan Pacific Championships in Tokyo, Japan.

Galyer, 20, a backstroke specialist, is a junior at the University of Kentucky and set a personal best time of 2:09.77s in the heats of the 200m backstroke at last week’s USA National Championships. She went on to finish 8th in the A-final in 2:10.91s.

Galyer’s personal best time ranks her 17th in the world, based on two athletes per nation.

“I’ve spent a majority of my time in the U.S. but New Zealand has always been part of my life… I’ve always admired the Kiwi sporting spirit and the way the competitors took so much pride in wearing the fern.”

Galyer added, “My introduction to New Zealand was watching the All Blacks with my Dad and for my family to see me put on the black uniform and represent New Zealand is something I’ve thought about for a long time, it’s very exciting.”

Swimming New Zealand Targeted Athlete and Coach Manager Gary Francis is thrilled at having Galyer commit to swimming for New Zealand and also adding another athlete to the Pan Pacs team.

“This is a fantastic opportunity for Swimming New Zealand and Ali. It’s not every day you find a world class athlete from the world’s premier swimming environment to add to your team. Ali has massive potential to improve even more and we are very excited that she’s committed to New Zealand.”

“The entire Pan Pacs team are very excited to meet their new team mate and welcome her into the Swimming New Zealand family,” says Francis.

Francis added, “we look forward to working alongside Ali, her coach and her family to ensure she has support from Swimming New Zealand.”

Although Galyer did not compete at the 2018 Aon NZ Open Championships, the Swimming New Zealand selection panel approved a dispensation request for Galyer to be added to the Pan Pacific Championships team.

Born in Brisbane, Galyer was raised in Greenville, South Carolina and has New Zealand heritage through her father Roy who was born in Matamata and grew up in Te Puke and Tauranga. Galyer’s mother was born in Canada and is an Australian Citizen.

Although the Galyer family are based in the U.S. they are very close to their relatives living in the Tauranga and Taupo.

“My Dad comes from a family of seven, I am particularly close to my Nana, my Aunts and Uncles so our family get togethers have always had a huge Kiwi component,” says Galyer.

Galyer will join the rest of the New Zealand swimming team in Kobe, Japan on Tuesday for a staging camp ahead of the start of the Pan Pacific Championships in Tokyo on Thursday 9th August 2018.

Uh why is this after she’s made A finals at nationals? Wouldn’t that have affected someone who placed 9th in prelims.. I thought international swimmers couldn’t be in the A final? Not trying to be rude just asking..

I assume that she declared after the race, some time in the last 3 days.

This is interesting… seems kind of wrong to do that right after the meet when others were trying for A finals..

Eh there are worse crimes against humanity. She can only do this one time. I think I am going to start a website to match swimmers up with other countries…..swimancestory.com. There will be eBay like bidding where the countries can bid on swimmers the faster the swimmer the higher the bids. I will provide some fake ancestorial relations to the winning bid country to make it all seem legit.

Why would it be wrong?

She didn’t break any rules, she was eligible.

She didn’t break any rules. But I wish this was done another way. Her participation affected other swimmers. The purpose of the event was selection to various US national teams next year. The decision to represent NZ wasn’t a spur of the moment decision and will have been in the works well before this meet. She would have known qualifying for the US worlds team next year and the Olympics beyond was highly unlikely in backstroke. Given that I’m skeptical that her choice of sporting citizenship for the US or NZ was predicated on results here. Anyway I get that it’s a great opportunity for her and that she has close ties to NZ so I do wish her the… Read more »

To some it is poor ethics

People upset should be outraged by the way the NFL treats its players then. Cut them and send them packing with nothing to show for it but a few concussions. How about Lebron playing in the NBA finals when it was a known fact he was leaving Cleveland the second the season is over. Sports at this level is partly a business so maybe you guys can join the 21st century

This means she holds dual nationalities, and she was eligible to swim at Nationals.

Only because at the time she hadn’t yet declared sporting citizenship to NZ. She won’t be swimming at US selection meets in the future.

Everyone who gets upset about doping should also be uspet about this. As Hswimmer stated…. She took a spot that should have gone to someone else. Then when she failed she decided to finally pull the trigger.

If there was a “Special request” that had to be approved, it seemed like this has been in the works.

She is a US citizen who tried to make her national team. When she didn’t, she took another option that presented itself. The dramaticism evident on these boards sometimes is mindblowing.

Actually your statement is even more mindblowing. She took advantage of the US system. I don’t believe in karma, but if I did………..

How did she take advantage of US system? Everything she has done was within the laws and regulations.

Kevin and Mick Litherland were also trying to represent New Zealand in Rio Olympics having failed to qualify in the US trials, but they were not #1 or #2 fastest New Zealanders. It’s all legit.

I don’t think that’s dramatic at all Dee. Just realistic. Skepticism is well warranted here. I’ve nothing against her deciding to swim for New Zealand. It makes a lot of sense for her. But I think you’re being very naive to think she participated at Nationals with any intention to potentially represent the US going forward. Was she competing at Nationals under the direction of Swim New Zealand, who had yet to make up their mind? Even if she optimistically believed despite difficult odds that she could qualify for Pan Pacs…by merely competing there she would be throwing away any opportunity to represent New Zealand at the Olympics in 2020. And she would be losing that opportunity without even having… Read more »

KeithM – so you think if she had made the American Pan Pacs team, that she would’ve still jumped ship and gone Kiwi?

I do. It would be amazing if she had qualified given the field. But even if she pulled a Justin Wright against that competition…she would be taking a massive risk against steep odds going into 2020 trying to qualify for the US, and kicking that NZ opportunity to the wayside. It wouldn’t make much sense. Just by competing in Japan in a few days she would lose out on that opportunity. I’m not angry at her and I wish her well. I don’t necessarily think that it’s poor ethics just that I wish it could have been done differently.

So what you are saying here is basically, no other swimmers apart from Baker and Smith sholdnt have bothered swimming 200 back at the Nationals because they had zero chance of qualifying.

That…….is more horrific thought than anything Ali Gayer has done.

“So what you are saying is.”

I said nothing remotely close to that. It’s not just about the best swimmers at the top but about the overall depth and quality of the field. It’s also completely out of context to the wider issue here.

And of course if she had qualified for pan pacs this week she would have represented USA there!
Seriously that’s pathetic.
She shouldn’t have gone to US nationals if she already had that idea of representing New Zealand.

Pathetic? Bit harsh Bobo. I just see it as a young athlete taking opportunities that are open to them. Who really cares? Most swimmers do this sport to make it to big meets. I would do what she has in a heartbeat if the option presented itself.