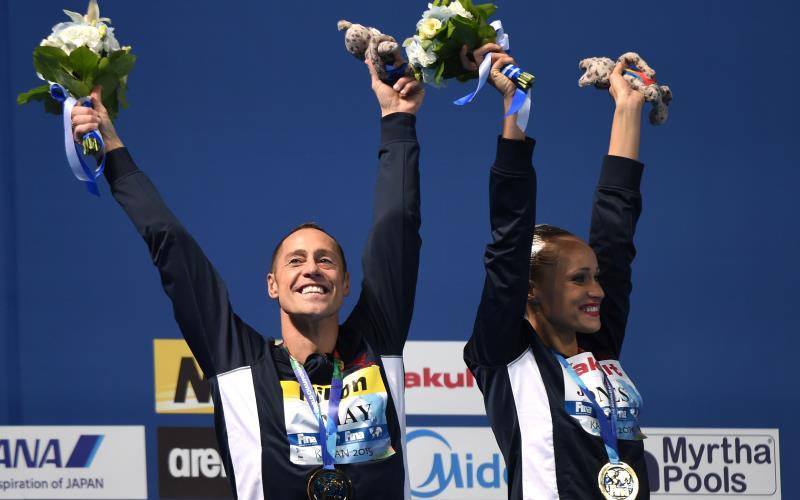 INDIANAPOLIS – The U.S. duo of Bill May (Cicero, N.Y.) and Christina Jones won gold Sunday in the first-ever mixed duet technical event at the FINA World Championships in Kazan, Russia.

May, making his debut in a FINA-sanctioned event, and Jones scored 88.5108 points in the final, edging Russia’s Aleksandr Maltsev and Darina Valitova, who finished at 88.2986.

“This is a dream a long time in the making,” May said.

Said Jones: “It’s an honor to be a part of this experience, an honor to be at Bill’s side, and an honor to bring the gold to the U.S. This would not have been possible without our coach, Chris Carver, and the support we have had from our team (the Santa Clara Aquamaids).”

May, Jones and Kristina Lum Underwood have been coached in the lead-up to the FINA World Championships by Carver, a member of the International Swimming Hall of Fame who led Team USA at three Olympic Games (team gold in 1996, team and duet bronze in 2004) and is the longtime coach of the Aquamaids.

May and Lum Underwood (Las Vegas, Nev.), a 2000 Olympian who was a four-time national duet champion with May, will compete in the mixed duet free preliminary Tuesday (11:45 a.m. local).

The U.S. duo of Anita Alvarez (Kenmore, N.Y.) and 2012 Olympian Mariya Koroleva (Concord, Calif.) finished 12th in the women’s duet technical on Sunday, scoring 83.5089 points in the final. They will compete in the women’s duet free preliminary on Tuesday (9 a.m. local).

May, once barred from FINA events due to his gender, won 14 U.S. national championships and several international titles during his synchronized swimming career. A trailblazer in a predominantly all-woman sport, he became the first male to win a national title in the U.S. and was named USA Synchro’s Athlete of the Year in 1998 and 1999. He added numerous duet titles and won a silver medal with Kristina Lum at the Goodwill Games in 1998. May was inducted into the U.S. Synchronized Swimming Hall of Fame in 2012.

FINA voted for the addition of mixed-gender events in synchronized swimming and diving at the Extraordinary Congress in Doha, Qatar, in November 2014.

Excellent! Bill has gone through enough adversity and finally has found his pot of gold.

Good. Maybe one day FINA will do away with their sexist policy that bars men from most of the synchronized swimming events.

Congratulations to May and Jones. I know this has been a battle for Bill May for so many years and he has fought so hard to compete at the highest level in the sport he loves. You are a trailblazer!