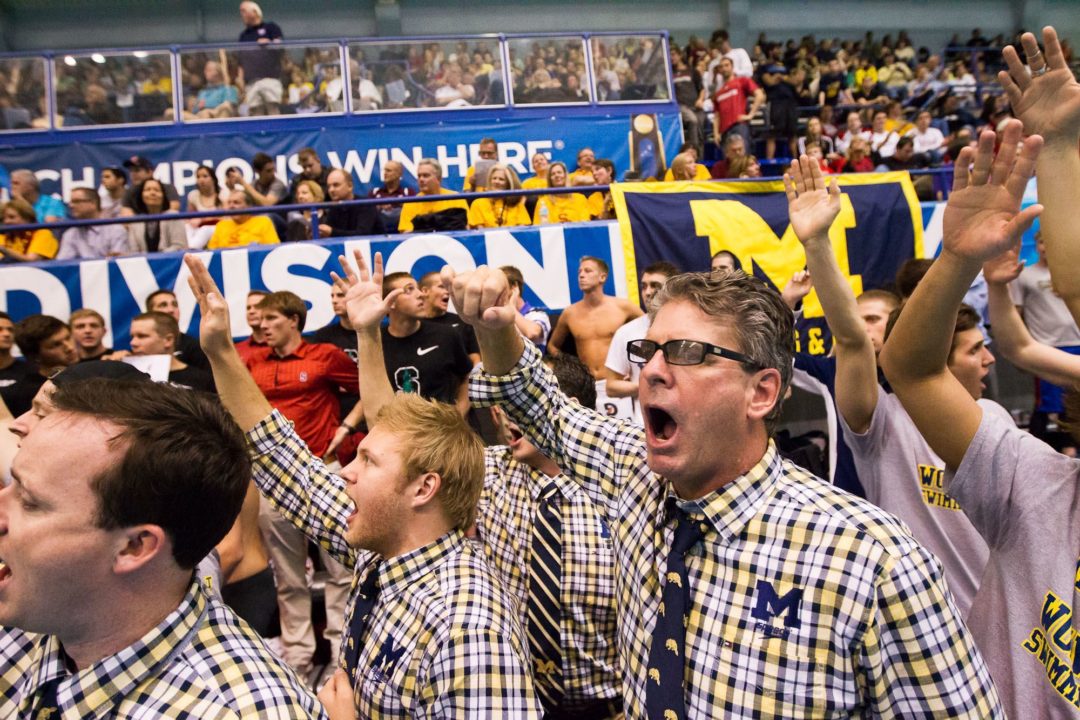 "The exciting thing about this class is the potential," said coach Mike Bottom. "It's a small class, but each of these guys are hard workers." Current photo via Tim Binning/TheSwimPictures.com

“The exciting thing about this class is the potential,” said head coach Mike Bottom. “It’s a small class, but each of these guys are hard workers. Our staff is confident in their ability to come in and compete from day one.”

“Ross is a phenomenal athlete,” said diving coach Mike Hilde. “He’s going to elevate our entire men’s program to be more competitive at the Big Ten and NCAA levels. I think he’s a guy who can not only qualify for the NCAA Championships, but final in all three disciplines. He’s just a great kid with a great work ethic.”

The son of former U-M swimmer Gustavo Borges, a four-time Olympian and 10-time NCAA champion, Luiz figures to add to Michigan’s depth in the sprint freestyle events. He swims for Pinheiros Swim Club in São Paulo.

Roberts is a distance freestyle swimmer who trains at the Naval Academy Aquatic Club in Annapolis, Md. His father, Bill, is the head coach at the U.S. Naval Academy. Roberts finished sixth in the 1,000-yard freestyle at the 2016 NCSA Spring Championships and was a three-time finalist at the Speedo Championships Series at Christianburg.

Todd, from Happy Valley, Australia, is a current member of the Diving Australia National Squad. He is slated to make his second consecutive appearance for Australia at the upcoming FINA World Junior Diving Championships after winning bronze in the Boys 14/15 one-meter springboard competition in 2014. This year, he’ll compete again on one-meter and also on platform. This past summer, he placed third on platform and seventh on three-meter at Australian Olympic Trials.

“By the end of their freshman year, I think we’ll look back and see that this was one of the best classes in the country and one of the best in our program’s history,” said head coach Mike Bottom. “These women are capable of contributing in multiple events, which adds depth and makes our team stronger. We’re thrilled to have them.”

“Nikki and Christy will raise our program to a whole new level,” said diving coach Mike Hilde. “They raise the bar for what we’re looking at in terms of competitive ability and make us a more well-rounded team. As those two help each other improve, our team gets better.”

Canale, a springboard specialist, is a two-time North Carolina 3A state champion on three-meter. She qualified for 2016 U.S. Olympic Trials in that event, finishing 17th. At the 2016 USA Diving National Championships, Canale finished fifth on three-meter and ninth on one-meter.

Pyshnenko is the lone sprinter in the class. She is the daughter of Vladimir Pyshnenko, a four-time Olympic medalist for Russia. In 2015, she won the 50- and 100-yard freestyles at the 2015 Illinois State Championships. She swims for Cats Aquatic Team.

meeee – while we can’t say for sure, but if an athlete isn’t on scholarship they can’t sign a real, binding letter of intent (they can do whatever they want ceremonially). If they don’t sign a letter of intent, the school can’t announce them.

Men on way down, women on way up