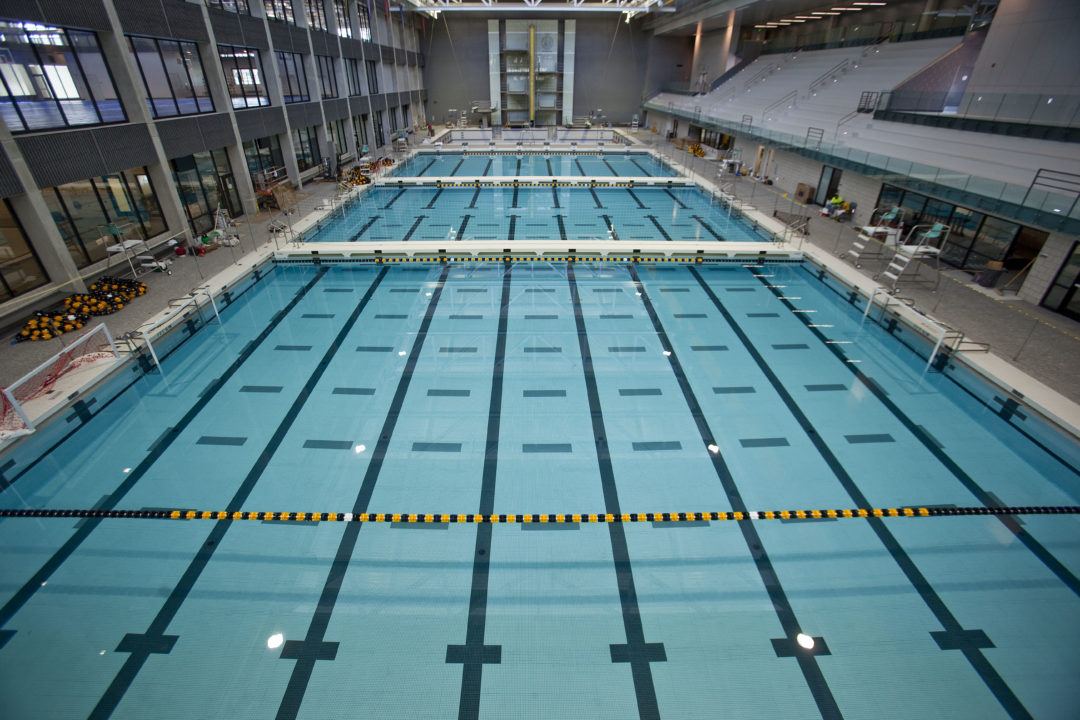 Members of the University of Iowa's womens swimming and diving teams have filed a lawsuit against the school under Title IX. Current photo via Stephen Mally

The lawsuit is being brought against the school by four members of the team: Sage Ohlensehlen (senior), Christina Kaufman (sophomore), Alexa Puccini (freshman), and Kelsey Drake. Drake is the program record holder in the 100 and 200 fly, as well as a member of the record-holding 400 medley relay. She was slated to swim the 200 fly at the 2020 NCAA Championships prior to its cancellation last spring.

The lawsuit alleges the university has been skirting Title IX rules in various ways for years. Part of the lawsuit accuses the university of adding additional roster spots to certain sports, adding what it refers to as “benchwarmers”, instead of expanding the number of sports available for female athletes. It cites the women’s rowing team who, in recent years, has boasted a roster between 40 and 70 percent higher than the national average. According to the lawsuit this was done in order to meet Title IX’s equity clause, which mandates that the gender ratio of the athletic department reflects that of the school’s undergraduate enrollment.

Also included in the lawsuit is the percentage of enrolled undergraduate students who participate in athletics. As of 2018-19, 3.36% of enrolled men at the school were provided an athletic experience while only 2.83% of women were. This percentage gap equates to between 47 and 61 roster opportunities not granted to women at the school.

Another argument it uses fights back against the school’s claims that budget issues due to COVID-19 made cutting the swimming and diving team necessary. It points out that just a week after it was announced that the teams would be cut, the school announced they would be giving raises to football coaches that equaled $575,000 in total.

In 2016 a complaint was filed with the Office for Civil Rights at the U.S. Department of Education (OCR). This complaint accused the university of providing unequal opportunities in athletics for men and women. Following an investigation, the OCR stated that they could not conclude that the athletic department was in compliance with Title IX rules. According to the OCR, the school’s athletic department failed all three parts of the Title IX compliance test: providing athletic opportunities proportionate to the school’s enrollment, showing a historical and continued practice of program expansion for the underrepresented sex, and proving to be fully accomodating of the athletic interests of the underrepresented sex. The current lawsuit claims that the school has continued to fail all three parts of the test under its current athletic director.

Historically, the University of Iowa’s athletic department has struggled with gender equity. In 2015 the senior associate athletic director Jean Meyer filed a lawsuit against the university under the Iowa Civil Rights Act, bringing forward five separate claims that included gender discrimination. The following year a second lawsuit was brought forward alleging discrimination based on gender and sexual orientation after a long time women’s field hockey coach was fired. Both cases were settled and involved the university paying out millions in damages to the plaintiffs.

This lawsuit comes just days after women’s athletes at the College of William & Mary submitted a letter to the school threatening legal action should their sports be cut following the 2020-21 school year.

Wishing them the best of luck! Universities need to stop cutting swim programs.

Lots of schools do similar things. At Georgia they add roster spots on the women’s equestrian team to pad their numbers. Pointing it out doesn’t mean they’re throwing that team “under the bus”.

This is such a weak argument. So sorry for the kids at Iowa but this doesn’t have the slightest chance at winning.

I have limited legal knowledge.
Could you expand on why?

It worked for Northern Iowa back in the early 2000s to get their program back. Why would it not work here? This is almost the exact same thing.

The lawyers should follow the same playbook the Nebraska football lawyers followed to reinstate Big-10 football from the clutches of the Coronabro school presidents that wanted to cancel it for political reasons. Subpoena all their communications and documents, in addition to following the money.