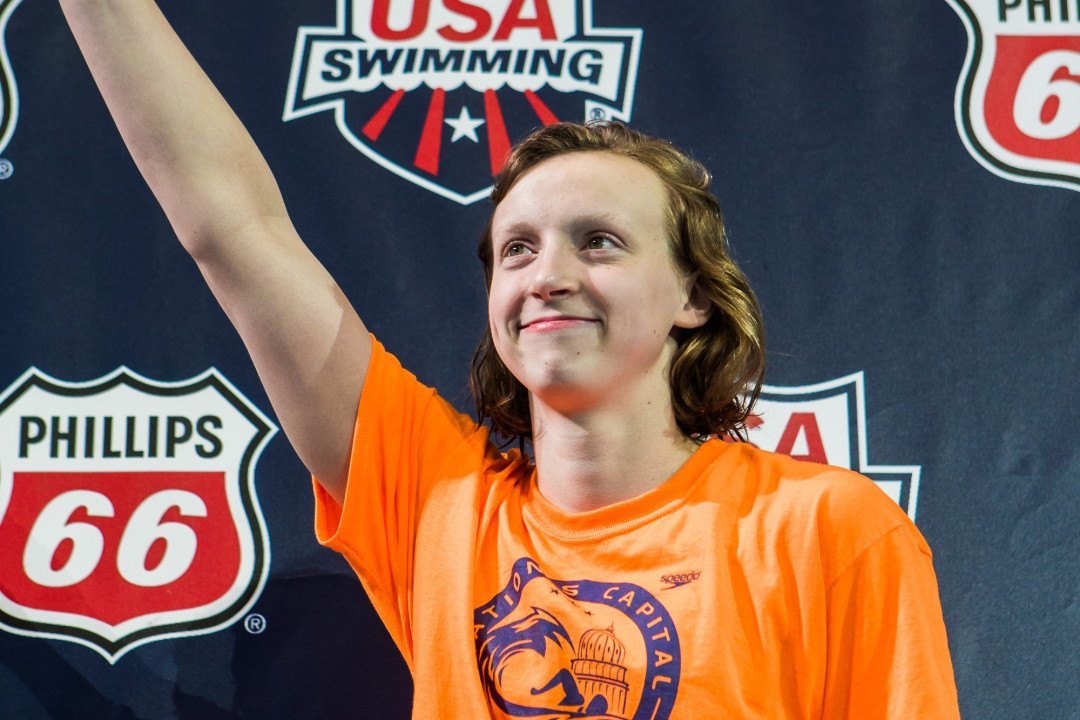 Led by 5 gold medals and 2 World Records from Katie Ledecky, the Americans won another Pan Pacs medals table - which they've done every year since 1999. Archive photo via Tim Binning/TheSwimPictures.com

The ISL criticized what it called “bullying” by national federations restricting athlete participation, though the ISL’s medical protocols are still unclear.

The 2014 Pan Pac Championships are complete, and with all medals counted, the Americans have come away with 40 total medals, including 14 gold, to once again lead the medals table.

Those 40 medals come out of a maximum 62 winnable medals. While that shows a good density of success, the medal total was down from the last edition of this meet in 2010. There, the Americans won 25 golds, 15 silvers, and 7 bronze medals for 47 total in the pool – including many more golds.

That’s equally as illustrative of the improved depth of Japan, and an Australian team that is heading toward a peak, plus an American team that was heavily reliant on rookies and other relative newcomers.

Of the United States’ 14 medals, 9 came from the women’s team and 5 were won by their men. The overall counts were split pretty evenly, with 21 for the women and 19 for the men.

The United States has topped the medals table at Pan Pacs every year since 1999, when the Australians led by Susie O’Neill, Ian Thorpe, Michael Klim, Grant Hackett, and Simon Cowley won 13 gold medals to the Americans’ 12.

The USA should win the medal tally every year really.
Having a population of 314 million to Australia 23 million it’s quite the advantage.
The Aussies did well to be only 4 gold short from equaling.
They have some talent on the rise, look forward Rio is gonna be good.

In Gross Medal Production Per Person –

As elsewhere we just have to be more economical . We could take on the whole USA if you could excise DC ( ie Katie ) to their own nation. Plus they should take Baltimore with them .

Then bring it on 🙂

This is not a contest between the USA versus Australia populations/countries. It is really a contest between Swimming Australia versus USA Swimming. The US does hold a demographic advantage but it is more like 4 to 1 not 15 to 1. Still an “up” performance by the Australians and, except for the young US female swimmers, a “down” performance for the US men. The good news for the USA is that RIO is still 2 years away and there is time for some of the young US male swimmers to mature.

The kicker demonstrates just how strong just Katie / NBAC is . Besides that if you excised DC & Surrounds , you could keep your taxes.

Where is Jubal Early when we need him?

For an “off year” for most American stars, not actually bad. I think they have the depth when it comes down in Rio. I really do believe that we will see more new emerging talents other than Katie-Missy-Ryan-Michael on the rise for Team USA next year.