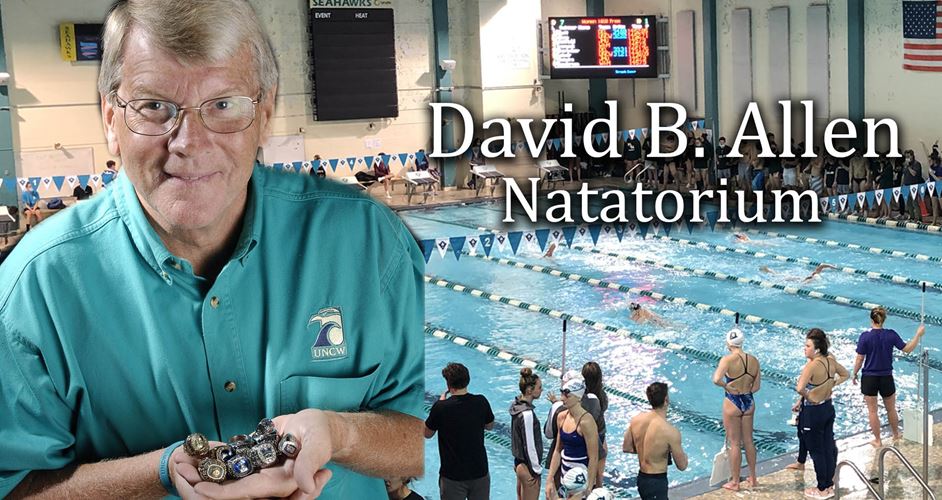 UNCW’s Seahawk Natatorium will be renamed the David B. Allen Natatorium to commemorate the remarkable 37-year career of Allen as head coach from 1977-2014.

WILMINGTON, N.C.  – UNCW’s Seahawk Natatorium, home of the school’s highly successful swimming and diving teams, will be renamed the David B. Allen Natatorium to commemorate the remarkable 37-year commitment of Dave Allen as head coach of the program from 1977-2014.

A formal dedication ceremony will be announced at a later date. Allen’s name became synonymous with the UNCW swimming and diving program following an ultra-successful career full of impressive accomplishments.

“We’re extremely pleased to pay tribute to one of the most beloved head coaches in the history of our program,” said Jimmy Bass, UNCW’s athletic director. “It’s only fitting that the facility be named in honor of the person that established the swimming and diving program and made it so successful. We’re grateful to Dave and his family for their many contributions to Seahawk swimming and diving.”

A native of Rochester, N.Y., Allen coached teams to 542 dual meet wins at three institutions. Prior to UNCW, where he fashioned a record of 494-356 in 37 seasons, he coached one season at Allegheny College and then six at Potsdam State. During his time at UNCW, Allen coached 15 All-Americans, 155 conference champions and 19 Eastern winners.

“I am truly humbled and appreciative of this honor in my name,” said Allen. “During my coaching career at UNCW, I was very fortunate to come in contact with many talented and professional faculty, staff and student athletes who became lifelong friends. I will be forever grateful to UNCW for the opportunity of a lifetime.”

Allen established the UNCW program in 1977-78 and it flourished. He directed the UNCW men’s and women’s teams to a combined 16 conference championships, including 13 on the men’s side and three for the women, along with a pair of Eastern titles.

Allen led the men to an impressive streak of 13 consecutive Colonial Athletic Association men’s titles from 2002-14 and also coached the women to three championships, including back-to-back crowns in 1998 and 1999, and the 1997 and 1988 ECAC titles.

Allen racked up 15 CAA Coach of the Year honors – 10 as the league’s top men’s coach and five for his success with the women’s program.

Allen swam collegiately at Springfield (Mass.) College and began his coaching career at Allegheny in 1970-71. He spent one year at Allegheny before moving on to Potsdam State (N.Y.), where he compiled a 44-26 record with the Bears.

At Potsdam, Allen’s squad captured the state championship in 1977 and was ranked No. 15 in the NCAA Division III poll. In his final two seasons in New York, Allen coached five All-Americans and was voted Coach-of-the-Year. He was inducted into Potsdam’s Athletic Hall of Fame in 1997.

Allen was honored in 1987 when he was selected to represent the United States government in a five-week tour of the Mideast. He presented clinics and seminars in Turkey through the U.S. Information Service’s Sports America program.

During his successful career, Allen sent six Seahawk swimmers to the NCAA Championships and numerous student-athletes earned All-CAA honors and other major honors.

Butterflyer Sam O’Leary became the school’s first NCAA Division I All-American in 1982 and 10 years later, sprinter Dan Gallagher raced to a fourth place finish in the 50 Freestyle. Diver Dean Berman competed in the NCAA’s in 2006 and Caitlin Kirsteier (2010), Rob Anderson (2010) and Carly Tanner (2013) competed in the NCAA meet.

Krayer closed out his career as one of the most decorated swimmers in the program’s history. In addition to helping the Seahawks capture four CAA titles, he was named the CAA’s Male Scholar Athlete-of-the-Year in 2004-05 and 2005-06.

Six of Allen’s swimmers have been inducted into the UNCW Athletic Hall of Fame, including inaugural class members Janet Johnson and Sam O’Leary in 1998. Other swimmers enshrined include Burak Erdem (2002), Amy Lewis (2006), Dan Gallagher (2010) and Adrienne Sutton (2014).

Allen announced his retirement on March 13, 2014, after coaching 44 years at three different institutions and stepped down officially from UNCW on June 30, 2014.

Allen and his wife, Ellen, have three children – Matt, Brian and Stephanie – who graduated from UNCW and competed on the Seahawk teams. Allen has six grandchildren ranging in age from 3 to 12.