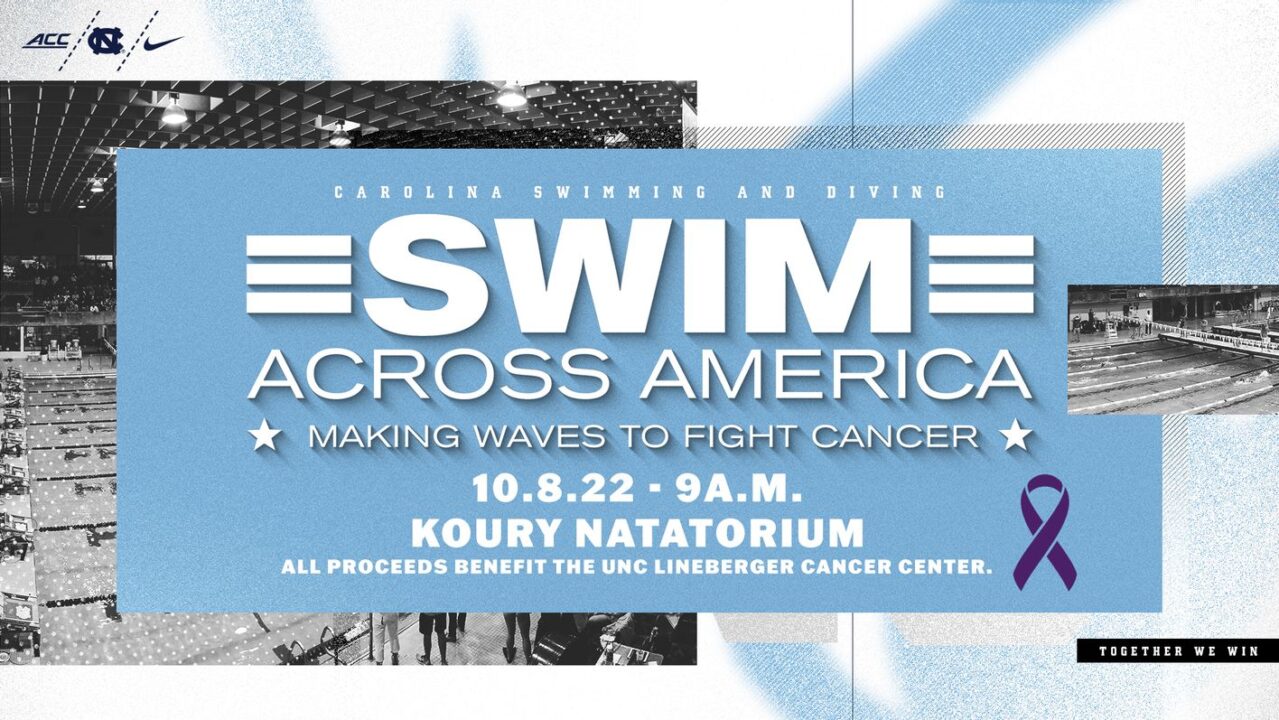 With two weeks remaining, the community has nearly reached its goal of $50,000. All funds go to the UNC Lineberger Cancer Center. Current photo via UNC Athletics

CHAPEL HILL, N.C. – The University of North Carolina swimming and diving team will host a Swim Across America Event on October 8 at Koury Natatorium to make waves to fight cancer. Registration will begin at 8:15 a.m. with the event starting at 9 a.m. All ages and skill levels are invited to participate in the Team Relay format in a fun and impactful charity swim, while others are encouraged to volunteer or donate.

The fundraising goal for the event is $50,0000 with the proceeds from the event benefiting the UNC Lineberger Comprehensive Cancer Center, which is the only public comprehensive cancer center in the state of North Carolina.

Emily Grund, a cancer survivor and senior on the UNC diving team, will be one of the featured speakers along with Dr. Shelley Earp of the Lineberger Center.

“I, myself am a cancer survivor and I worked very closely with the Lineberger Adolescent and Young Adult (AYA) program while I was undergoing chemo,” Grund said. “I talked with a few of their therapists while I was inpatient discussing ways to come to terms with my diagnosis and they helped me with ways to deal with the stress that comes along with my diagnosis.

“We want to ensure that future patients are afforded the same personal attention and care I received by raising money for Lineberger.”

The faculty of the Lineberger Center treats cancer patients, conducts research into the causes of cancer and search for new treatments, develop and direct statewide programs in cancer prevention, and train future physicians, nurses, scientists, and public health professionals.

“It’s a privilege to make an impact,” Gangloff said. “Every year cancer is affecting every single person through our program and with Emily being diagnosed last year, we want to integrate the swimming and diving team into our community and support cancer patients and the hospital system anyway we can.

“There is something special that happens when swimmers of different ages and different abilities swim together with a common goal. It’s not a race, it’s not a competition. It’s everybody coming together to support cancer research.

Teams will swim for 60 minutes with only one swimmer for each team in the water at any given time with the team swimming the most yards earning the “reward spotlight.” There will be no limit to how long or far each team can swim.

Prior to the relay, the new video board at Koury Natatorium will be dedicated in honor of the late Janis Hape Dowd, who passed away in March 2021 after a brave battle with cancer.

Since its inception in 1987, Swim Across America has raised over $100 million for cancer research, clinical trials and patient programs while bringing together water enthusiasts of all ages and abilities in cities across the country.