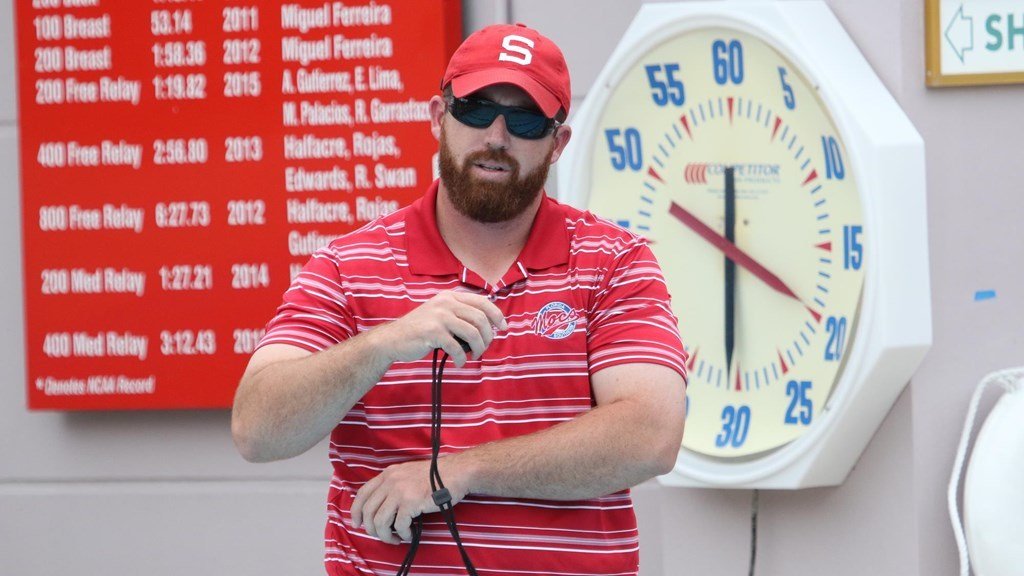 The University of North Carolina has announced the addition of Mike Blum to its 2018 men’s and women’s swimming staff as...

The University of North Carolina has announced the addition of Mike Blum to its 2018 men’s and women’s swimming staff as an assistant coach Blum comes to the program after 3 years as the head coach at Division II Florida Southern College, and replaces Duncan Sherrard, who left to join Gary Taylor’s new staff at Auburn.

He returned home to his alma mater for the 2012-2013 season, where he was an assistant under Sherrard, before eventually taking over his post as the program’s head coach. Ironically, Sherrard is the same man that Blum will replace at UNC.

The full UNC press release is below:

CHAPEL HILL, N.C. — The University of North Carolina swimming and diving teams announced the addition of new assistant coach Mike Blum who joins the Tar Heel family after three years of serving as head coach of the men’s and women’s swimming programs at Florida Southern College.

“I am very humbled and excited to join the UNC Swimming staff,” Blum said. “I would like to thank head coach Rich DeSelm and the entire athletic department for this opportunity, and I am looking forward to being on campus and helping the program any way I can.”

During his time as head coach at Florida Southern College, the 2016 CSCAA Division II Men’s Swimming National Coach of the Year led his teams to multiple top-20 finishes at the NCAA Championships including third-place for the men and 15th for the women in 2016. His men’s program went on to place fourth in back-to-back NCAA Championships and the women’s team finished 18th in 2018.

Blum was also an assistant coach for Florida Southern College for two separate three-year periods. He was deeply involved with the university’s recruiting process, helping the program develop 56 All-Americas, seven national champions, two qualifiers for the 2013 World Championships, and one qualifier for the 2012 Summer Olympic Games in London. Florida Southern College also saw 24 new school records while Blum was an assistant.

During his brief hiatus from Florida Southern College, Blum spent time as an assistant senior coach at the Venice YMCA in Sarasota, Fl. where he coached four FHSAA state qualifiers, one FHSAA state champion, the 2011 Florida Swimming Senior Championship team champions, and one Senior National and Olympic Trials qualifier. He moved on to take an assistant position with Gardner-Webb University where he returned to overseeing recruiting for the men’s program and organizing the training of all distance swimmers and 400 individual medley competitors. Though only with the program for one year, Blum helped the university set six new school records and earn two top-five finishes at the 2012 Coastal Collegiate Conference Championship (third-place for men’s and fourth-place for women’s).

Blum has also been the head coach of Lakeland Area Swimming in Lakeland, Florida since 2012 and later took ownership of the club in 2015. Responsible for managing day-to-day business operations, he worked with all levels of swimmers and coached Junior National, Senior National, and U.S. Open qualifiers in addition to 2012 and 2016 Olympians in the 400-meter freestyle and the 100-meter butterfly.

“On behalf of our staff and the athletic department, I would like to welcome Coach Mike Blum and his wife and son, Jen and Jude, to UNC,” head coach Rich DeSelm said. “Mike brings tremendous coaching experience from both the club and college ranks. His perspective as a head coach will be a tremendous asset as we work toward helping our student-athletes excel. We are excited to see Mike’s energy, enthusiasm and passion for developing swimmers to their potential as we begin a new season.”

Great hire for UNC! Good to see Mike get a chance at the next level.

Anybody else think it’s funny it looks like he’s wearing an NC State cap in the picture?

That is not an NC State cap…believe it is a Florida Southern cap.

Why does a presumably good coach like this join a lifeless team like UNC… Russian Roulette on job security, DeSelm’s got 1-2 more bad season before he’s out.