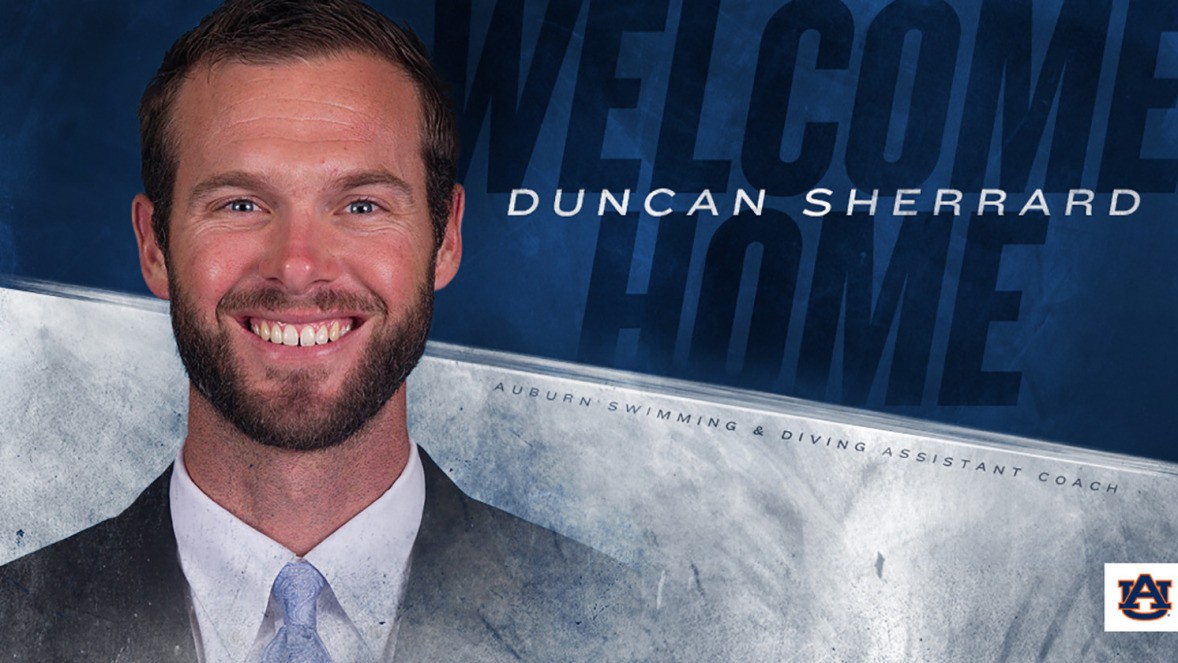 Auburn announced on Monday that they had hired Duncan Sherrard as the first assistant coach of Gary Taylor’s new swimming coaching staff. Sherrard comes to Auburn after 3 years as an assistant at North Carolina.

Sherrard, prior to his 3 years at UNC, was the head coach at Division II Florida Southern College from 2009-2015, and for the 3 years prior to that was an assistant at top Junior College Indian River State College. He also served as an assistant on the 2017 U.S. World University Games staff, where North Carolina had two athletes competing: Caroline Baldwin and Hellen Moffitt. Baldwin won the 50 free and Moffitt won the 100 fly at that meet for university students around the world.

“Duncan has been a winner at every level he’s ever been on,” Taylor said. “He understands grit, determination and hard work. He knows what it takes to become a winner and that’s what I want to be surrounded by.”

The North Carolina women placed 4th out of 12 teams and the men were 8th out of 12 teams at last year’s ACC Championships. UNC broke school records in all 5 men’s relays, 4 out of 5 women’s relays, and both the 50 and 100 free while Sherrard is there. Caroline Baldwin, who Auburn’s press release credits Sherrard with coaching, also broke the ACC Conference Record in the 50 free and became the school’s first 50 free finalist in back-to-back seasons in 20 years.

UNC’s results during Sherrard’s tenure there:

A 4-year varsity letter winner and 14-time NCAA All-American swimmer at Florida, Sherrard was a team captain during his senior year with the Gators. He also was head swim coach for Bucholz High School in Gainesville from 2004-2006 and an age group coach at the Gator Swim Club from 2002-2005, shortly after his graduation.

Congratulations Duncan! What a great hire for Auburn, adding a great coaching mind and an all-around good guy! We still gotta get together for that G’nT Duncan, My Treat!!!

I thought UF might pick him up but you gotta move quickly sometimes,

Congrats Duncan! Hope the Tigers are a good fit for you. You deserve a D1 head coaching position some day.

Congrats Duncan! — Auburn is getting a fantastic coach, but an even better man/person. His passion and commitment are rare. I wish he and his Family all the best with their new opportunities!

Is Gideon Louw the next to join the auburn staff? Sprint coach would make a lot of sense and that’s what he is and a former all American for Auburn.

UNC’s recent performance aside, Duncan is a great recruiter and a talented sprint coach who will bring a lot of energy and enthusiasm to Auburn. Gary’s made a great hire in Coach Sherrard. Will be interesting to see how UNC deals with this… seems to only accelerate their downward spiral.

Disagree. You can’t say recent performance aside! Three years. Oh who cares. UNC men sprinters are awful but put that aside. Apple made the right move

I’m not suggesting Coach Sherrard’s performance at UNC doesn’t matter, but that UNC’s headline performance belies the caliber of coach that Duncan is. He certainly isn’t the reason for the program’s lack of success, and he may well have been one of the few things holding it together. We should know in short time.

Huh! I figured he would be up to get a spot on the new Florida staff.