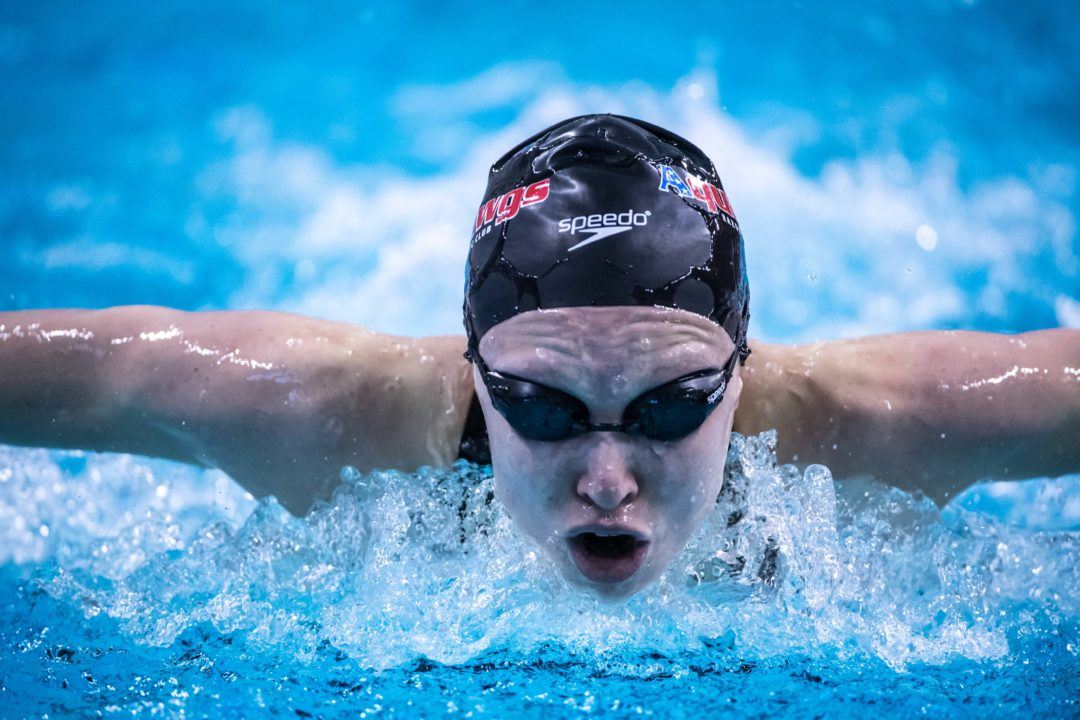 A pair of juniors are set to swim-off for 8th place in the women's 200 fly, a dramatic start to this week's hugely-important U.S. National Championships. Archive photo via Mike Lewis/Ola Vista Photography

A pair of juniors are set to swim-off for 8th place in the women’s 200 fly, a dramatic start to this week’s hugely-important U.S. National Championships.

15-year-old Lillie Nordmann and 18-year-old Taylor Pike each went 2:10.30 this morning, tying for 8th place. The two will be set for a swim-off for the final spot in the championship heat tonight with a lot of international qualifying on the line.

Pike is 18, but has a 1999 birthday and is ineligible for Junior Pan Pacs. But if she can make the A final, the Texas A&M rising sophomore could be in the mix for either a World University Games or a Pan American Games spot. If she loses the swim-off, she’s likely out of both teams, in this event at least.

Nordmann dropped 2.3 seconds from her lifetime-best this morning, while Pike cut about a half-second. If the tie isn’t resolved another way, the swim-off should happen at the end of this morning’s session.

Update: Pike topped Nordmann 2:10.07 to 2:10.72 in the swim-off. That’ll push Pike to the outside of the A final and Nordmann to the middle lanes of the B final for tonight.

I thought jr pan pac was based on top times; why does the final Nordmann makes matter? If she goes the 2nd fastest 18 & under time from the B final wont that still count?

It’s all about place, it doesn’t matter about time because those are the selection procedures

It’s about finish order, not times. So a top 8 finish will trump a B final finish regardless of time in terms of selection procedures.

Oh wow, thank you. Who won? usaswimming cut off the stream :/

Wow! What an incredible race! An hour apart to swim 2 200 flies at Nationals is rough. Way to go, Taylor Pike!