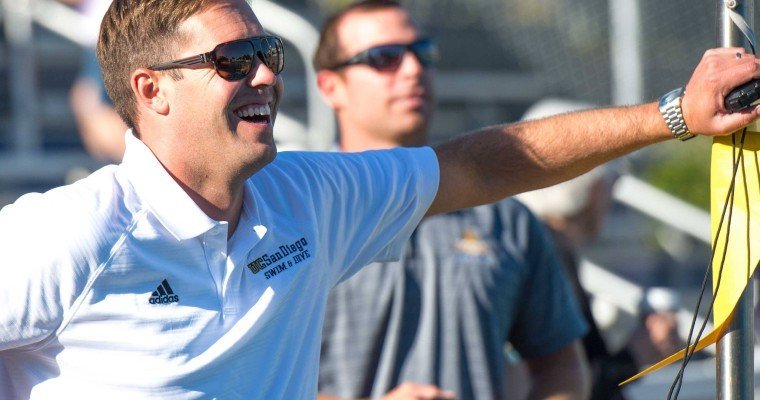 On Tuesday, UC Davis announced their new head coach hire. Matt Macedo will head to Davis from UC Santa Barbara, where he finished out the 2020-2021 season, and will join the Aggies’ women for their 2021-2022 season. In December of 2020, former UC Davis head coach Barbara Jahn announced her retirement, leading the university to begin the search for a new head coach.

The university was impressed with Macedo’s successful coaching career, but also the “experience and philosophy [which he will bring] to the UC Davis family.” Athletic Director Rocko DeLuca is confident in the coaching selection, claiming that he has “no doubt [Macedo] will continue the tradition of excellence with our swimming and diving program.”

Macedo’s collegiate coaching career began at UC San Diego, where he served as an assistant coach to the men’s swimming and diving team from 2008-2011. The Triton men placed second at the NCAA Division II championships during the 2010-2011 season, prompting the university to promote Macedo to head coach.

During his tenure as head coach in San Diego, Macedo led the Triton men to 16 National Titles, 3 NCAA Division II records, and 125 All-American honors. In 2012, UC San Diego sent eight athletes to the Olympic Trials and had one top-20 finalist. It was the most Olympic Trials attendees ever had by the program.

His success as head coach at UCSD gave him the opportunity to pursue a Division I coaching job at the University of California-Santa Barbara. Santa Barbara is part of the same conference as UC Davis (the Mountain Pacific Sports Federation).

At UC Santa Barbara, Macedo proved that he could lead a collegiate program to success anywhere he went. Macedo served as an associate head coach to the program during the first 2 seasons of his time with the Gauchos, but was later appointed head coach of the program and spent the next five years in that position.

His teams dominated the MPSF conference during the 2016-2017 and 2017-2018 seasons with both team’s earning second place at the conference championships. Throughout his time with the program, the Gauchos picked up a total of 61 individual and relay titles at the MPSF championships, and broke five conference records. In 2016, his program made history when it sent 11 student-athletes to the Olympic Trials.

Before coaching at the collegiate level, Macedo spent time with two of the nation’s most premiere swim clubs, including The Race Club (based out of Islamorada, Florida). Macedo was an assistant coach for The Race Club during the period leading up to the 2008 Beijing Olympics, and assisted head coach Mike Bottom in preparing numerous athletes for the games, such as Nathan Adrian and Milorad Cavic.

Macedo had a decorated collegiate swimming career of his own before switching over to coaching. He swam for the University of California while he pursued his B.A. in American Studies. Macedo attended the NCAA championships all four years of his time as a Cal Bear, and earned 20 All-American honors, as well as two back-to-back titles in the 400 free relay.

While at Cal, Macedo competed at the 2000 Olympic Trials and placed sixth in the 50 freestyle. To this day, he is one of the world’s top-performers in the 50 and the 100 freestyle events. From 2001-2003, Macedo represented the USA as part of the US National Team.

Of his new position, Macedo expressed feelings of excitement and gratefulness. His biggest goal for the program is to “[focus] on continuing the program’s quest for conference championships and success in the NCAA postseason.” He acknowledged the history of his new role, crediting former head coach Barbara Jahn’s success and noting that he “[has] big shoes to fill” in that regard.

Jahn did leave big shoes for Macedo to fill. As head coach of the program, Jahn guided the program from AIAW status to Division I NCAA status. Under her reign, the men’s and women’s programs won a total of 15 combined NCAA Division II championships, and had 120 All-American finishes. Jahn herself won four Coach of the Year accolades in four different athletic conferences.

According to public records, the former UC Davis head coach’s 2019 salary (including benefits) was over $80,000 higher than Macedo’s salary in 2019 (as part of the Santa Barbara program).

Additionally, Macedo will transition from a co-ed head coaching position to his position at UC Davis, where he will work exclusively with the women’s team.

interesting jump, maybe wants out of the coillege town that is isla vista

not true, go away.

ohh i forgot u and matt are best friends

Matt is a former Bear, not an Aggie, as your headline reads.

Also, Matt will be head coach of the Aggies, not Tritons, and of the women’s team, as there is no men’s team. Thanks.

Congratulations to Matt! While the article content is correct, Matt was a Cal All-American not a UC Davis All-American.

UC Davis is gaining a great replacement for the women’s head coaching position. Macedo’s pursuit of excellence is intoxicating. We will miss him at UCSB.

Who will take over at UCSB?

Pat Ota seems like a no brainer with all his recent success and he’s UCSB alum.

Dumb decision as Davis could have hired their assistant coach who is in the ASCA hall of fame for coaching, Pete Motekaitis. Sad to see them pass up on that opportunity