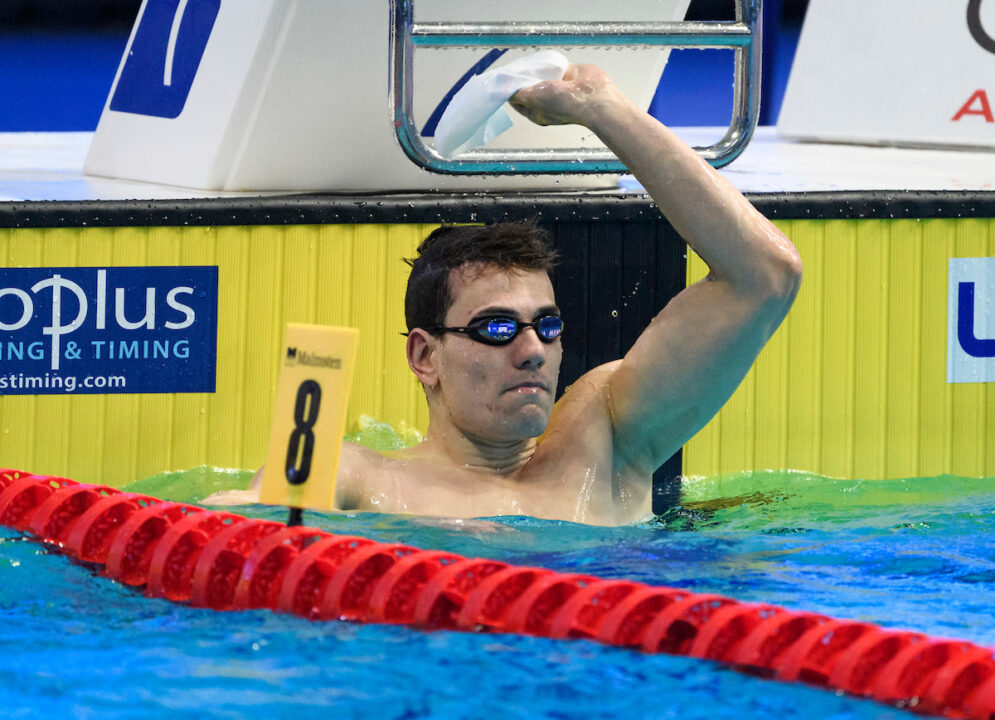 400 free winner Martin Malyutin had the fastest split in the men's 4x200 free field from the lead-off leg, splitting a best time of 1:45.15. Current photo via Andrea Staccioli / Deepbluemedia / Insidefoto

The Russian men delivered a wire-to-wire victory in the 4×200 freestyle relay, breaking the European Championship Record by almost two seconds in 7:03.48 to win their first gold in the event since 2010.

Depth is the name of the game in relays, and the Russians have it in spades in the men’s 100 and 200 freestyle events, having also won the 400 free relay on Day 1.

Out of the all 28 swimmers in the race – excluding the disqualified Swiss – it was Russia’s lead-off man, Martin Malyutin, producing the field’s fastest split in 1:45.15. That performance marked a new personal best time for Malyutin, the winner of the 400 free on Monday, who had gone 1:45.18 at the Russian Olympic Trials in April. He remains at #4 in the world this season.

Take a look at all of the race’s splits below:

Behind Malyutin, Tom Dean led off for the 2018 champion Brits in 1:46.47, a solid swim but well off his 1:44.58 from British Trials earlier in the year. It’s clear the majority of the nation’s swimmers are swimming through the meet in preparation for the Olympics.

Jordan Pothain had his fastest 200 free in five years on the lead-off for France in 1:46.91, while Spain’s Cesar Castro broke his National Record in 1:47.13.

Among the splits with a takeover, Alexander Shchegolev had a crucial 1:45.39 swimming second for Russia, essentially putting the race out of reach by the halfway mark as that put them three seconds clear of Great Britain.

Shchegolev swam a best time of 1:45.82 at the Russian Olympic Trials, and should be a factor in the individual event, along with Malyutin. Ivan Girev, who swam a time of 1:45.49 at those Trials and took second ahead of Shchegolev, was left off the relay tonight after splitting 1:48.17 in the prelims.

Duncan Scott (1:45.29) and James Guy (1:45.88) put up quick splits for Great Britain, not enough for gold, but it did put them well clear of Italy and France to solidify the silver.

It’s also worth noting that it appears the results show a strong 1:45.90 split from Switzerland’s Nils Liess before the team was ultimately disqualified for an early exchange. (The 1:45.90 is on the third line for Noe Ponti, but the 400m split of 3:32.65 indicates the sub-1:46 split belonged to Liess.).

What does all of this mean for the individual event? Based on form, Malyutin has to be the favorite, but Scott will surely be in the hunt. And for the Russians, the likes of Krasnykh and Girev will need a big swim in the prelims to knock off Shchegolev, as each country can only have two swimmers compete in the semis.