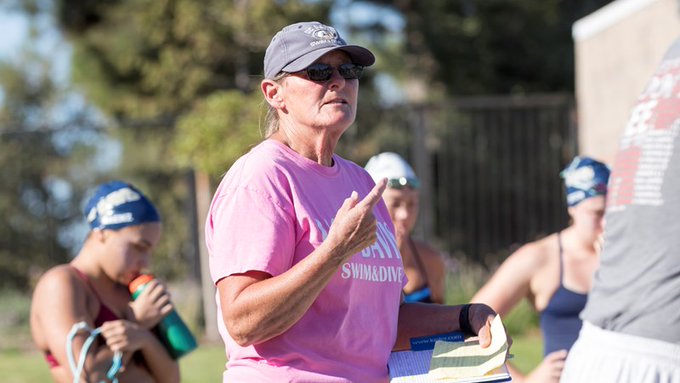 After 46 years in charge of the UC Davis women's swimming & diving program, Barabra Jahn will retire at the end of this season. Current photo via UC Davis Athletics

UC Davis head women’s swimming and diving coach Barbara Jahn, the longest-tenured head coach in school history in any sport, announced on Tuesday that she will step down after the 2020-2021 season. She has been the program’s head coach for 46 years.

She is the only official full-time head coach in program history. US Olympian Debbie Meyer was named the program’s first head coach while still a UC Davis student, but left before taking over the post. Scott Gaw ran the program for one year but was never formally given the head coaching title. Rick Henderson served as an interim coach during Jahn’s sabbatical year of 1982-1983.

When Jahn first became the head coach of the Aggies, women’s sports weren’t included in the NCAA. At the time, UC Davis was a member of Division III of the AIAW. She oversaw the team moe through its time in NCAA Division II and into Division I.

UC Davis moved to Division I athletics for the 2004-2005 season, and by 2010 won the Big West Conference title. They won 4 MPSF conference titles in the 6 seasons thereafter.

Her swimmers have earned over 120 All-American finishes at the NCAA Championships and won 15 NCAA Division II national titles. UC Davis swimmers Anna Pettis and Kristi Wheeler were both named to the NCAA Division II “Team of the Decade” for the 1980s. She won Coach of the Year honors in 4 conferences: the Northern California Athletic Conference, the Pacific Collegiate Swimming Conference, the Big West, and the MPSF.

“Barb has been a pillar of UC Davis Athletics for decades and is a pioneering leader in women’s coaching,” said Kevin Blue, director of athletics. “When Barb approached me about her retirement in the spring, I reflected on the extraordinary influence she’s had on thousands of students she’s coached, taught, and mentored at UC Davis. We’re eager to celebrate her career throughout the remainder of her final season.”

Jahn was named the winner of the Richard E Steadman Award in 2019 from the CSCAA, which honors those who have “done the most to spread happiness in Coach Steadman’s beloved sport of swimming and diving.”

“Every year, we face new challenges, and every year is different,” Jahn said to her current Aggies. “That’s what makes this job so rewarding and never the same. The ebb and flow of outgoing seniors and incoming freshmen create unique team dynamics. Watching you grow and develop as teammates and as individuals is what’s all about. The years go by in a nanosecond and within that timeframe, I have watched you develop into mature, capable, independent, responsible and hardworking young women ready to ‘launch.'”

Last season, the Aggies finished 4th out of 8 teams at the MPSF conference championship meet.

Wow. She was there long enough to not coach one or two generations of swimmers, but possibly 3. Can you imagine if a grandmother, mother, and daughter all swam for the same coach at the same program? Just wow. Enjoy retirement Coach. You deserve it.

Can anyone find out if Coach Barbara did coach 3 generations of a family? That would be so awesome if she did!

No. But Barb has coached more than 10 Mother daughter combinations

This job should become yours!
Congratulations to coach Barb on an excellent career! Thank you for all you’ve done for so many.

Congrats you are an amazing role model!!!

That is quite a career, btw is there a database of longest tenured coaches?

There is not. In passing, this is the longest tenure I remember seeing. It’s likely we’re coming to the end of the era where coaches are head coach of a team for 40+ years – in the 70s, you would hire a 20-something fresh out of college as your head coach because they were available and the price is right. The market has become much more competitive, and the odds of hiring both a 20-something year old head coach who will stick with the same program for their whole career are much slimmer. I think the next generations of coaches have less of a “willing to die on deck” mentality than the current generation. Obviously that’s not what coach Jahn… Read more »