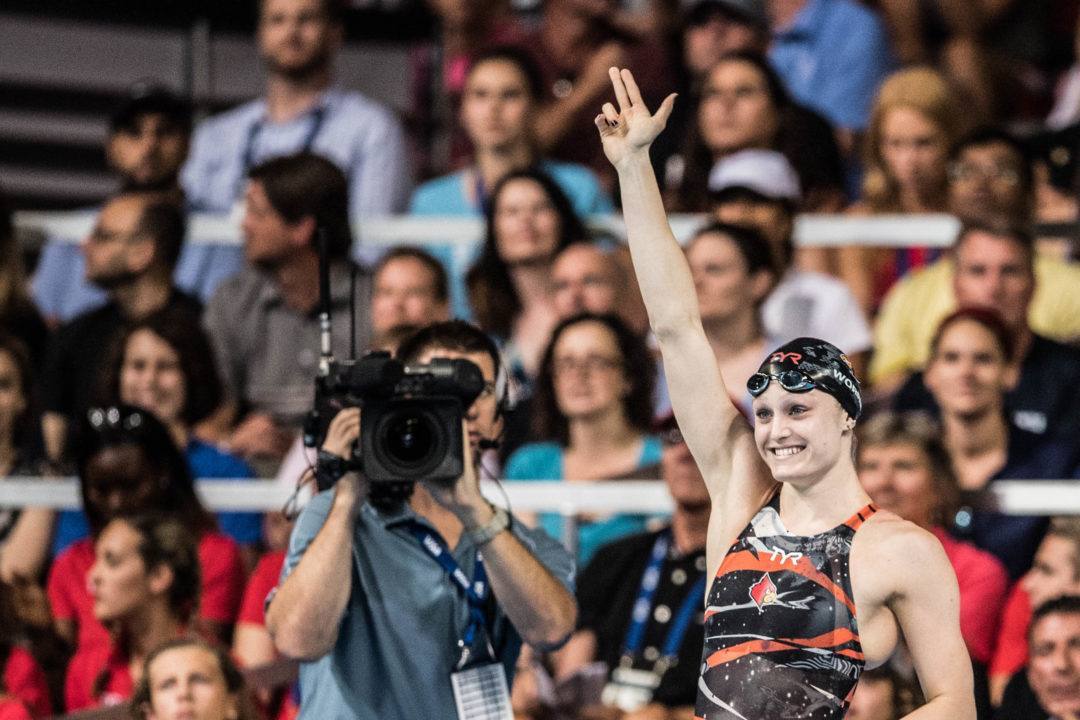 Kelsi Worrell rocked a 56.48 tonight for the 2nd-fastest time in the world this year, earning a spot on the 2016 USA Olympic Team. Current photo via Mike Lewis/Ola Vista Photography

Night two of the Olympic Trials is in the books– here’s how the U.S. Olympic roster is looking with six finals now completed.

Kalisz, Jaeger, and Dirado won finals on night one, and Ledecky, Worrell, and Cordes signed their name on the huge Rio flip flop tonight.

The 2nd place finishers aren’t guaranteed a spot on the team yet, because of a cap on team size. Only 26 men and 26 women are allowed on the team, which would be perfect if there were no relay swimmers, since there are 13 events with two individual spots for each. But, there are relay swimmers, so there is potential for there to be too many swimmers for the available spots.

However, it’s extremely unlikely for 26 different men to qualify for each unique spot on the team. Rather, there are instances where someone like Michael Phelps might qualify in two or three events, thus opening up more spots for people who finish second.

In all likelihood, enough swimmers will qualify in more than a single event, so all 2nd-place finishers in Omaha should make the team, too. Their spots just aren’t set in stone quite yet.

Also contested tonight were the semifinals of the men’s and women’s 100 back, the men’s 200 free, and the women’s 100 breast. Tomorrow night will be finals for those four races.

Remember that at these pool Trials, there are only 24 spots for the men and 25 for the women because of open water spots earned in Kazan last summer.

Also, the top 2 swimmers in the 100 and 200 free will get their individual spots, because 4 spots are open for the relays.

“Remember that at these pool Trials, there are only 24 spots for the men and 25 for the women because of open water spots earned in Kazan last summer.”

I don’t believe this is correct. Can anyone verify this, if it is actually true?

This is incorrect. Open water swimming is considered a separate competition, like diving or water polo. FINA rules can be found at https://cdn.swimswam.com/wp-content/uploads/2016/01/Rio-olympic-selection-procedures-FINA.pdf . Open water events are not included in the number of swimmers selected.

Reaching the team cap and thereby not allowing some second place finisher is a remote possibility. Any swimmer who finishes first OR second in more than one event reduces the need for another slot. There is no space taken up by a medley relay swimmer because they already qualify individually. And two spots on each free relay will be swimmers who already qualify by finishing first or second in the individual freestyle event. So we are really adding only four (not six) 100 free swimmers and four 200 free swimmers. Thus we only need eight ‘duplicates’ of a swimmer qualifying in more than one event, by finishing either first or second. (Or, a swimmer who qualifies first or second in… Read more »

So hypothetically speaking, say the team did have to be capped and a second place finisher was cut…could team USA fill the spot with someone already on the roster?

I think they could as long as they made the FINA A cut and the name was submitted in time. But that’s not gonna happen.

Cody Miller in the 100? Hard work, honesty, integrity, and humility really do pay off!
…

Yes– I’m really excited to see how the veterinarians fare at this meet!

So far all 6 Rio qualifiers are certainly medal “contenders”, which will make their races exciting for US fans, and of course the best swimmer on the day of the Olympic final will be the gold medalist; but in all honesty one would have to admit that probably only Katie Ledecky is a LIKELY gold medalist.

Overall so far it’s been a solid meet for the US. Only slightly pushing up the world rankings. But there’s plenty of races still to come.
I agree with you that medals won’t be a problem in Rio…But gold will be another story
400m Im’s plus the 400m Men’s and the 100m Fly all look very tough gold medal races. With the likes of Hosszu, Sarah Sensation, Sun Yang and Mack Horton all standing in their way.
Katie will win the 400m in Rio…just a matter of what time she posts
Have to acknowledge Leah Smith in her brave swim last night…well done