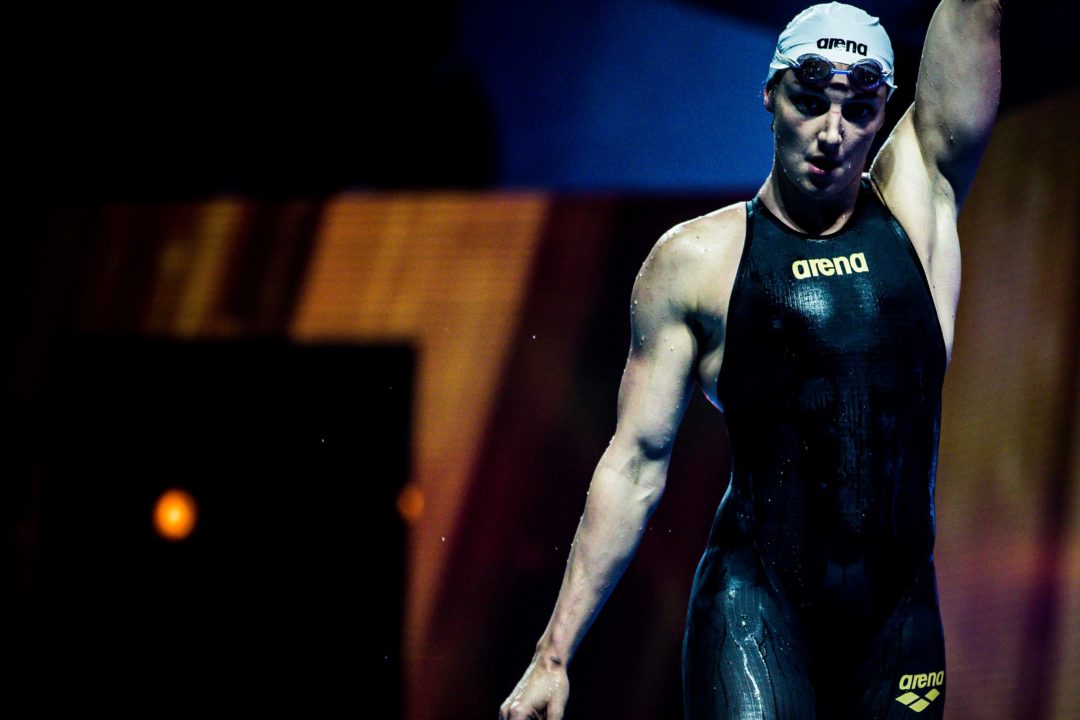 Katinka Hosszu lowered the boom in the final 50 meters of the women's 200 IM on Saturday in Indianapolis. Archive photo via Jack Spitser/Spitser Photography

Day 2 of the final stop of the 2019 FINA Champions Series again proved the format with monster performances from winners in virtually every event. Paring it down to 5 was a tall task – so tough that swims falling among the top 25 performances ever, like Joao Gomes Junior’s 26.60 in the 50 breast, didn’t make the cut.

Below are the top 5 performances from day 2 of the FINA Champions Series in Indianapolis:

1) Katinka Hosszu Drops The Hammer on Final 50 Meters of 200 IM – Hungary’s Katinka Hosszu, the “Iron Lady,” has been criticized for her performances at the Champions Series. In spite of coming away with over $100,000 in prize money, the critics have said that her performances haven’t always been up to snuff. And it’s true that she hasn’t been able to sustain her marathon schedules quite as well as she used to. But, as if to provide one giant clap-back on the final day of the meet, in her 5th event over 2 days, Hosszu swam a 2:08.50 in the 200 IM. She was more than a second behind Canadian Sydney Pickrem (who wound up with a Canadian Record in 2:08.61) heading in to the final length, but dropped an enormous 29.31 over the final 50 meters to swim a winning 2:08.50. That’s Hosszu’s best time since the 2017 World Championships in this event. Her closing 50 was a full second faster (1.17 seconds to be exact) than her closing 50 when she broke the World Record in 2015. That’s a statement split.

2) Pernille Blume Shows Heart With Season-Best 50 Free – Denmark’s Pernille Blume underwent heart surgery earlier this year to close a small hole. People close to the Blume camp have been down-playing the long-term impact upon her performance, and it appears they’re telling the truth. The defending Olympic Champion in the 50 free, Blume won the 50 free in 24.08, and in the process beat, among others, Sarah Sjostrom and Ranomi Kromowidjojo. That’s almost as fast as the 24.07 that she swam to win in Rio, and is her season-best time by two-tenths of a second. Blume has been faster each season since winning Olympic gold, and her health issues don’t seem to have appreciably impacted that progress.

3) Hali Flickinger Wows Again – If in-season swims could talk, Hali Flickinger is about to blow the door off the 200 fly, and anything else she races, this summer. She’s swum big-time after big-time this season, and the latest was her 2:06.40 in the 200 fly on Saturday. Her best time, and the US Open Record, is a 2:05.87 from last summer’s US National Championships. Going into that meet, her season-best time was a 2:08.04. I won’t fully-extrapolate that to a World Record call, but her monster season rolls on

4) Pieter Timmers Ticks Along – 31-year old Pieter Timmers, the 2016 Olympic silver medalist in the 100 free, swam a 48.34 in the 100 free on Saturday evening. That’s the 6th-fastest time of his career, sitting just behind the 48.32 that he swam in the last stop in Budapest. To swim 48.3s twice in 3 weeks is an appealing consistency for ISL teams.

5) Lilly King Finishes Breaststroke Sweep – Lilly King finished off a sweep of the weekend’s breaststrokes with a 1:05.13 in the 100 on Saturday.  According to USA Swimming, that’s one of the 25-fastest swims in the history of the event, and it’s King’s own personal-best time outside of a World, Olympic, or National Championship meet. That honor previously belonged to a 1:05.61 that she swam last summer at the PSS in Santa Clara before Nationals. She didn’t have a great taper, though last year the schedule was more condensed, so she still has plenty of time after this meet to set herself up for the World Championships.

Since I was asked and just to balance the article’s over excitement about Hosszu’s race in 200IM.
Should Hosszu be a little finger shorter in this race then the title should be : No golds for Hosszu at Champs show. What a shame to the self proclaimed “iron” lady.
Isn’t it strange that Sjostrom’s mind blowing 28.21 at last fifty during 200 race hasn’t found any place among top performances of the day. But pedestrian compare to that 29.31 of Hosszu was described as a super speed. Who cares if both swimmers were pretty slow at first part of the race.
And if to mention overloaded schedule as an excuse (or achievement depending on the taste) then… Read more »

Katinka is one of the reasons this series even exists! She is certainly the Iron Lady, she raced how many times within an hour?!

I have always found the Iron Lady title ridiculous. Iron Man is a triathlon competition. Not swimming a couple of 200s.

Your comment is ridiculous. Clearly you have no idea how incredibly difficult it is to swim several events in one session. Furthermore the title is an amazing marketing scheme that has paid off very well for her. No other swimmer has marketed themselves to the success that she has. She’s changed swimming.

I would argue almost every kind of serious swimmer ever had swum multiple events in a session before. It’s just what happens. Most swim meets are 2 days. Most people swim more than 2 events.

What part of “iron” lady’s body the epithet “iron” is applicable to. Nerves? No, they are made of steel. Liver? Kidney? You got to be kidding. Legs or muscles? Not right again. It will have only negative connotation should one say that about swimmer. What’s left? Head? You got it. That’s it.
P.S. There is some metaphor in other language about iron and part of human body, but I’m not sure if it has direct analog in English. The rough translation is: “to rule with iron hand”. But I don’t see how it is applicable in Hosszu’s case and again, it is about one hand only.
I think that Shane Tusup had “D” at best in the biology… Read more »

Again, you are ill-informed as the Iron Lady name wasn’t created by ST…
But just keep going with your critics. I don’t think anyone takes them seriously anymore

Yep, the creature with highly developed defense system that can be unpleasant in response on rough treatment. But otherwise is very gentle if handled properly (click on the link in my reply to FINS) 😀

Oops, I did not look at the link However, if you permit, this was not self-defense but an unfair attack. Fact: Hosszu won with the so far best time o the year.

At this point I assume you are trolling. In her third swim in an hour, Katinka posted a world #1 time, beating two fresh swimmers. She did an outstanding job during this Series. There is nothing to criticize here.

I’m not criticizing Hosszu. I do know a lot about her, but honestly, I care very little. I have very strong opinion about her and her former husband. This opinion was formed in multiple discussions on different websites and articles from serious periodicals. The opinion that isn’t emotional but is supported by historical facts, statistics of swimming competitions and other data. Do you want to start it here? I’m not sure you are ready.
What I have been criticizing here is your amusement about nothing. It was the same blindness about Franklin’s last three years of her career. It repeats itself now in Hosszu’s case. And by the way not every sites are so exited with “Hosszu phenomenon”
… Read more »

just go & chill out for a bit …u need to breathe clamly and let go of the grip to make yourself right . …

Ghengis Khan had a good balance of power too . Him ..

I don’t think many people have been criticizing Katinka’s performances. It has mainly just been Yozhik.

I think so too. But he has been doing it very consistently

Thanks. Any chance to block him? 😂

agreed . There is no need to criticize such an amazing swimmer ….but some always find something .

Anyone who criticizes Katinka is a world class fool. She is 30 and not swimming 50s. When she races 400s that don’t suit her given fatigue or upcoming events she doesn’t loiter like Rapsys did.

There is no question that Katinka’s final 50 was the performance of the night. Well done to identify it. But I had confidence it would be spotlighted. This site normally gets the big picture correct, unlike some of the commenters.

Sjostrom’s final 50 in the 200 freestyle was meaningless. It should not have been assigned its own thread. I’m a big fan of hers but that was a rare example of basically never even attempting to win or give her best effort.

Happy to see Timmers putting down very decent 100 free swims . His stroke is beautiful to watch & he has easy speed on the first 50 – backed up by a very solid consistant second 50 . He will be dangerous this summer ….

Timmers has been announced to Team Iron quite a while ago

The title of the article says pro swim series…?

That photo of Katinka is intense. She’s ripped!

You failed to mention that was Katinka’s 3rd Swim of the session (in an hour) and Sydney and Melanie’s first swim! Super impressive race! She owns the IMs