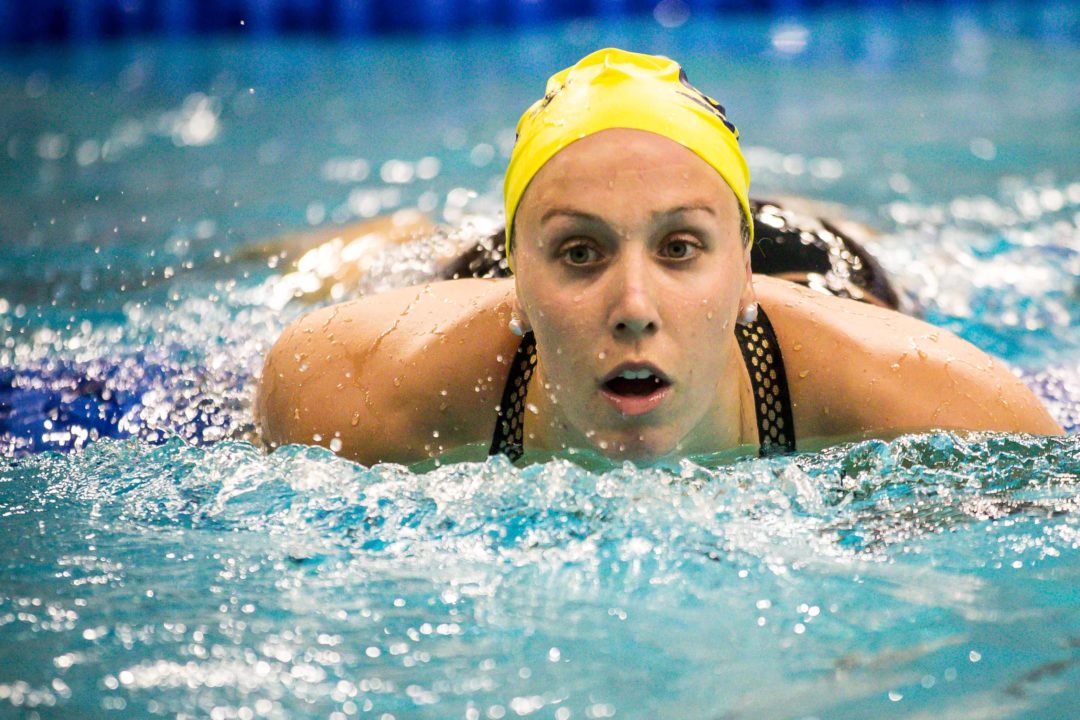 With a jump from 8 to 10 teams in the league, and an expansion from 7 meets to 27, there is going to be a dramatic rise in the need for athletes... Archive photo via Jack Spitser/Spitser Photography

In a live Facebook interview, International Swimming League officials shed some light on the recruiting/roster-building process for the ISL’s second season.

The ban could prove to be an obstacle for the International Swimming League, which is reportedly considering Queensland for its “Solidarity Swim Camp.”

Editor’s note: while there is still a loud call for seniors who qualified for the 2020 NCAA Swimming & Diving Championships to receive an extra year of eligibility, the NCAA thus far has not made any announcement about extending eligibility of winter sport athletes (though there are plans in the works to deal with eligibility of spring sport athletes at the Division I and Division III levels). This article is working under the assumption that swimmers who have exhausted their eligibility will be turning pro after this season, and that they won’t get an extension to their college careers.

Year 2 of the International Swimming League is scheduled to begin in September (though, all things scheduled at the moment are prone to being rescheduled due to the global coronavirus pandemic). With a jump from 8 to 10 teams in the 2020-2021 league, and an expansion from 7 meets to 27, there is going to be a dramatic rise in the need for athletes to fill rosters in the new season.

In year 1, teams were limited to 32 swimmers (16 male and 16 female) on their rosters, though most teams wound up announcing more athletes than that. In year 2, with more meets probably resulting in more competition conflicts, multiple teams have told SwimSwam that their target is closer to 40 athletes-per-roster.

With several clubs having to reach pretty deep to fill out their rosters last season with around 275 participating athletes, with the need to fill 400 roster spots this season, even more opportunities will open for athletes who might not have been able to continue their professional careers otherwise. An anticipated higher level of Asian participation will help fill that gap, though there’s plenty of talk about what a post-Olympic season will do for participation as well.

A big new batch of swimmers available to clubs will come out of the American collegiate system, where every year a group of ISL-caliber swimmers exhaust their amateur eligibility and turn pro. While the league is filled with stars from around the planet, with the deepest and best-developed amateur system in the world, this will be a primary annual source of filling the depth needed to make the league function.

Note: we’ll publish another article later this week looking at other swimmers who could add depth. The group below is focused on swimmers who will be immediate impact swimmers at the top end of rosters. Yes, this list is event-biased: the ISL is heavily slanted towards sprinters, and so is this list.

Hopkin arrived at Arkansas from the UK as a junior as a known quantity in her home country, having won the female BUCS (NCAA equivalent) Swimmer of the Year award, but with the Razorbacks she’s blossomed into a star. Among a year where the NCAA is loaded with female sprinters, Hopkin recorded the likely* fastest-ever split in a 50 free in NCAA history. She’s been a little inconsistent at times, but when she hits her race perfectly, she’s about as good as anyone has ever been in yards in the 50 and 100 free. There’s some potential in the 200 free and the sprint butterflies in a pinch.

Sendyk, the 2019 NCAA runner-up in the 50 free, doesn’t get much press, but he has speed-to-burn. While he doesn’t have a big event range, on the right team, his role in the league could be akin to a Ben Proud – swim his 50 free and 50 fly, fill in a few B relay spots, and take a stab at a semi-final or occasional final in the 50 free. With the emphasis on skins racing, if Sendyk can prove formidable in the multi-round format, he could become a star in the league. There’s not really enough data there to say for sure yet, though.

Drabot should get a lot of attention from ISL teams because of event selection. Last year, a number of ISL teams had trouble filling spots in the women’s IM, 200 fly, and 400 free events, and that’s where Drabot shines. She’s also a good enough sprinter to fill a hole on a B relay.

Note on the table below, all of Drabot’s SCM bests came from the 2014 World Cup when she was 17. Her event lineup has changed a little since then, tending away from sprints and more toward longer races.

If it weren’t for defending league MVP Sarah Sjostrom, Hansson would be Sweden’s best swimmer. She’s currently tied with Maggie MacNeil as the fastest 100 yard butterflier in history, and like many others on this list offers a lot of versatility (she’s a very good backstroker, sprint freestyler, and IMer as well). In her best finish, Hansson was 7th in the 100 fly at the World Championships last summer, and she’s better in short course than long course. With Dave Salo leaving USC, we don’t know yet what her training will look like long-term, but Salo’s training does lend itself to be effective for the ISL format.

The defending World Champion in the 50 back in long course, Zane Waddell will be in high demand and probably garner plenty of attention this off-season. While he doesn’t offer a lot above 100 meters (which can make rosters tricky, as he’ll have to be paired with a good 200 backstroker), he does offer bona fide A-relay caliber sprint speed, which is a bonus. Also, as a South African, he has more short course meters experience than most of the swimmers on this list, for whatever that’s worth.

In his 3rd, and final, season at Florida in 2018-2019, Maxime Rooney had a breakthrough and began to fulfill the potential he showed as a National high School Record holder. There were lots of expectations about his one-and-done year with the Texas Longhorns, but we didn’t get to see how it pans out. Still, Rooney’s short course breakthroughs combined with his long course breakthroughs last summer make him a tantalizing ISL prospect. That’s especially true of his 50.68 in the 100 fly and 47.61 in the 100 free. He doesn’t have a ton of event range, like some other swimmers on this list, but he still has plenty of ISL-class events to fill up a 2-day schedule.

It feels a lot like we were going to get Super Saiyan Coleman Stewart at the NCAA Championships and see some of the fastest backstroke times in history, but alas, it wasn’t to be. He’s also a very good butterflier, which adds some versatility to his repertoire.

Brown is another short course specialist, though her stock has been rising fast and she should be on the U.S. Olympic or World Championship team in the near future. Brown has good range and is a late bloomer, and we’re still learning what all she’s good at. While there’s not a ton of short course meters times on her resume for ISL comparisons, she did swim relays at the 2018 Short Course World Championships, which included a 1:52.86 in the 200 free that was better than her 3 teammates, all ISL swimmers, Leah Smith, Melanie Margalis, and Mallory Comerford. What’s more, she’s shown during her senior season that she can swim fast over and over again.

Will Beata Nelson ever be good enough in the big pool to make a major U.S. team in long course? The jury is still out. But ISL is in short course, and Nelson is as good as there is in the world in short course. She’s the fastest 100 yard backstroker in history and one of the fastest 200 yard backstrokers in history, and coming out of high school she was one of the fastest in age group history in the 100 yard fly as well. Nelson is the mold of the swimmer whose star could shine substantially brighter in the ISL format than in the traditional Olympic format.

Best known as a sprinter, earlier this season Abbey Weitzeil became the first woman in history under 21 seconds in the 50 yard free on a flat start. But what really pushes her to the top of this list is her versatility. She’s been 51.6 in the 100 yard back, and at times has stepped in as the breaststroker on Cal’s medley relays. She’s the type of swimmer who could be shifted into any of the 50 meter events as needed. There is a small injury concern here – Weitzeil has hurt her arm on hard finishes at two-straight Pac-12 Championship meets.

And if the quarantine lasts long enough…maybe even a 21-30!

Will there be a new re-ranking for the class of 2020 recruits coming soon?

I think they usually come out around early May

We’re discussing it. Once we get some clarity on whether Nevada, Colorado, and California are moving forward with their HS State Championship meets, we’ll decide what to do.

Clark County in Nevada cancelled all high school swimming.. state champs are a no go.

21-30 will basically just be for fun though I guess. I would imagine that plenty of them would be searching for a career other than swimming.

Why doesn’t Simone do the ISL?

probably chose to just get ready for the Olympics in her own way. I suspect she’ll probably compete in the future. just my guess

Quick correction, Pawel Sendyk was the runner up to Ryan Hoffer in the 2019 NCAA 50 Free, not the champion.