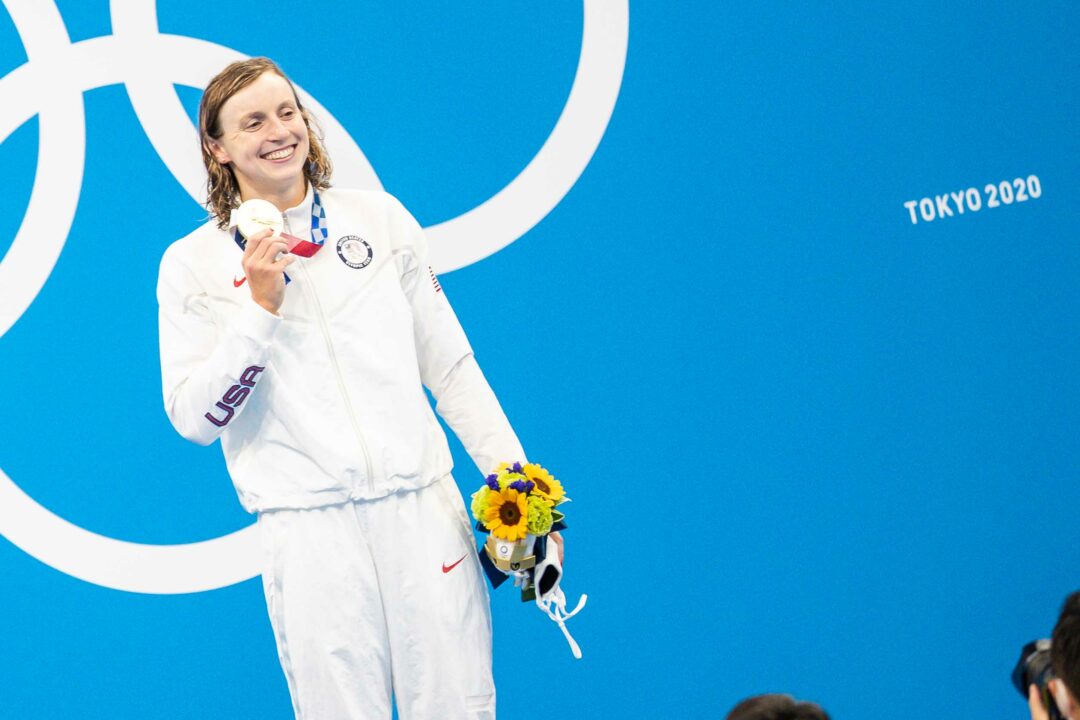 With Katie Ledecky and Caeleb Dressel claiming gold medals on day 7, the US is now approaching the 30 medal mark in Tokyo. Current photo via Jack Spitser/Spitser Photography

Day 7 of competition saw the United States claim two victories with Caeleb Dressel winning the men’s 100 butterfly and Katie Ledecky winning the women’s 800 freestyle. Both swimmers were the only Americans on the podium in their respective events, with Katie Grimes finishing 4th in the 800.

Behind Dressel, Kristof Milak claimed his second medal of the meet, coming in second overall. Despite not winning, Milak’s performance in the 100 butterfly made him the second fastest performer in history. Noe Ponti had a fantastic swim for the bronze medal, claiming Switzerland’s second swimming medal of these games.

Like Milak, Australian swimmer Ariarne Titmus’ time also made her the second fastest performer in history in the 800 freestyle, where she claimed silver behind Ledecky. Simona Quadarella managed to out-touch Grimes for the bronze, earning Italy another medal.

Australia earned 2 medals in the women’s 200 Backstroke, as Kaylee McKeown swam to gold and Emily Seebohm touched in 3rd. Canadian Kylie Masse finished between them for a silver medal.

In the final event of the night, Great Britain claimed the first-ever Olympic gold medal in the mixed 4×100 medley relay, the country’s second relay win of the week. China and Australia rounded out the podium in the event.

The US still leads the medal count, but Australia is in the position to possibly catch the United States on the final day of competition as there are 4 events left to be contested. Although the US will not surpass its total of 33 medals from Rio, the team may still earn over 30 medals.

This is actually a pretty good showing in a post Phelps Olympics.

Not according to some here. Some are saying they are in full “rebuild mode” right now.

Never again? Are we going to deny him entry in the future even if he qualifies?

Some of you trolls are obsessed with MA. It was never expected MA would have anything like a MP or even a Lochte type of medal haul and he probably never will. Even here it was predicted he would win only one individual medal

I have mixed feelings about it. Rio was an absolutely fantastic showing on both sides so compared to Tokyo it is a big step down. However they lead the medal table by a lot even without Phelps now.

Not by a lot.
8 golds for USA so far
7 golds for Australia

Stats are a bit misleading in that there 3 new additional events in which USA won 3 medals (should have been 4), so really difficult comparing to Rio, it is 23 to 29. Some new medalists surprised us like Finke 800, Jay IM, Kieran 4free, Weyant 4im, Jacoby 1breast, Sullivan 1500, Walsh and Douglas 2IM,Regan smith in 2fly. Etc. relays have more of a disappointment to me but maybe that turns around tonight!

it is funny that only USA ranking based on total metals not by gold metals, look at the big difference of gold metal between 2016 and now, do you still think it is pretty good.?

Yes, it is. There ARE other swimmers in the world.

If all that matters is gold, why even give out silver and bronze? Total metals show depth.

so, you would rather have 30 bronze metals than 15 gold metals.

Gold is not “all that matters”. But it is how the medal table is determined.

To counter your point, if a bronze medal is worth the same as a gold medal, why is it bronze? Why not give out 3 gold medals if they’re all equal?

I don’t see why 3rd = 1st and 4th = last in the slowest heat makes more sense in terms of results than gold > bronze.

Had MP not decided to come back in April of 2014 the US totals for Rio would have been 11 golds and 29 total medals (which is the likely medal haul here). I still think they would have gotten medals in the three relays (most likely silvers) but no one would have stepped up to medal in the 100 and 200 fly and 200 IM.

I think this Olympics swimming cycle has given US fans just about the entire range of emotions: joy, disappointment, high drama, and patriotism.
With 1 session to go, my faves so far:

How is Simone Manuel an example of true grit exactly?
The US has not swam well compared to previous Olympics.

Why don’t you enlighten us on how exactly she is not…?

I’d make the point that she’s no grittier than any Olympic athlete whose pathway to the games in their respective sport wasn’t without challenges & set backs. She’s gritty though, no doubt about it!!

But I can see how some would say she’s done nothing that would have her head & shoulders above other Olympians. She was supposed to make the team in the event and didn’t. Hardly an experience that other athletes don’t also experience.

“Swum well”. And actually, they have. Perhaps you don’t understand true grit.

I understand your desire to support somehow the swimmer who was one of the greatest American Olympic hope. But there was nothing special what Manuel did in Tokyo. The fact that US team came to this Olympics practically without any sprinters (with Weitzeil a slight exception) doesn’t make Manuel participation in 4x100FR relay a heroic achievement. And by the way, her poor relay exchange cost American team a silver medal. Just wish her that her issues (whatever origin they are) will not become permanent. Then it will be a true grit.

No, “true grit” is struggling through those issues.

The expression on Katie Ledecky’s face upon completion of the women’s 1500 freestyle was pure joy for Erica Sullivan and sheer relief for herself.

My favorite is Lazlo making the 200IM final. Disappointment is that he didn’t medal in his final race, but that was a big ask. End of a great career.

High drama was your number 1. Ledecky trying to channel her inner Jason Lezak.

Joy; the women’s 200 breast stroke with the big celebration party at the end of the race.

Patriotism: watching all those early heats and the look of happiness when swimmers who know they will never even get to an Olympic final reach a PB

The women have already accrued the most medals at a non-boycotted Summer Olympics since 1972:

Wild to think that while not necessarily likely, Australia and the US could finish with the same gold medal count. Australian women been on point here

That would need Emma to win the 50, Aus women to win the medley, and USA not to win the men’s medley or 1500. Im not even going to pretend Caeleb might not win the 50, but if he misses the bus or breaks his leg then Australia could top the golds outright.

Ultimately it won’t happen. Emma strong chance to win the 50 but absolutely no guarantees because it’s such an inconsistent event. Aus women have a chance to win the medley but I still think USA are favourites.

But tbh even of Australia doesn’t win another medal today at all, I think this a better result than anyone was expecting. The Australian women absolutely killed it.

USA typically exceeds expectations at OG’s while Australia swim seems to have some untapped potential at big meets. New generation of swimmers changing the narrative for sure

The award for the most overhyped and most overrated swimmer at the Tokyo 2021 Olympics goes to Michael Andrew. Never buy into MA hype ever again. Never!

MA is not a swimmer I’m a fan of, but I really don’t think many people care for him, which is why I don’t get the non-stop bashing of him on here. Are there a lot of MA stans here? Lol

Has it ever happened that the medal type that the US has won the least of is gold?

It’s currently 8-9-9. Dressel should be a lock to make that 9-9-9 going into the relays (apologies Weitzeil and Andrew), and it’s not inconceivable that the US fail to win both medley relays (though I’d expect them to take at least one).

British Swimming having a great meet- 4 gold medals is the highest tally for GBR since 1908.

So proud of team GB. I know a lot of people have just focussed on Aus vs USA but GB has had an absolute breakout Olympics as well, and very possible to add a fifth gold today. Not far off Aus on 7 and USA on 8 currently.

As much as people say USA is having a bad meet, I think it’s more that some other countries have stepped it up much more than expected, GB being one of them.

Random question: Are Northern Irelanders in team GB? If so, shouldn’t it be team UK since NI is not in GB?

I also believe that the official name of the team is Team Great Britain and Northern Ireland but Team GB has been used for short and caught on.

Oh ok, thanks for that. I had no idea.

When medals are being announced officially they only say “Great Britain”. If the official name was “Great Britain and Northern Ireland” wouldn’t they say that?

There are some Northern Ireland athletes who are competing in Tokyo for Great Britain and NI, while others are representing Ireland. Some sports like rugby, cricket, hockey, golf, boxing and swimming are organised as all Ireland. Soccer is of course different with NI and ROI.

There are some NI swimmers competing for Ireland but none on Team GB. eg) Danielle Hill and Jack McMillan. Jordan Sloan is also from up north.