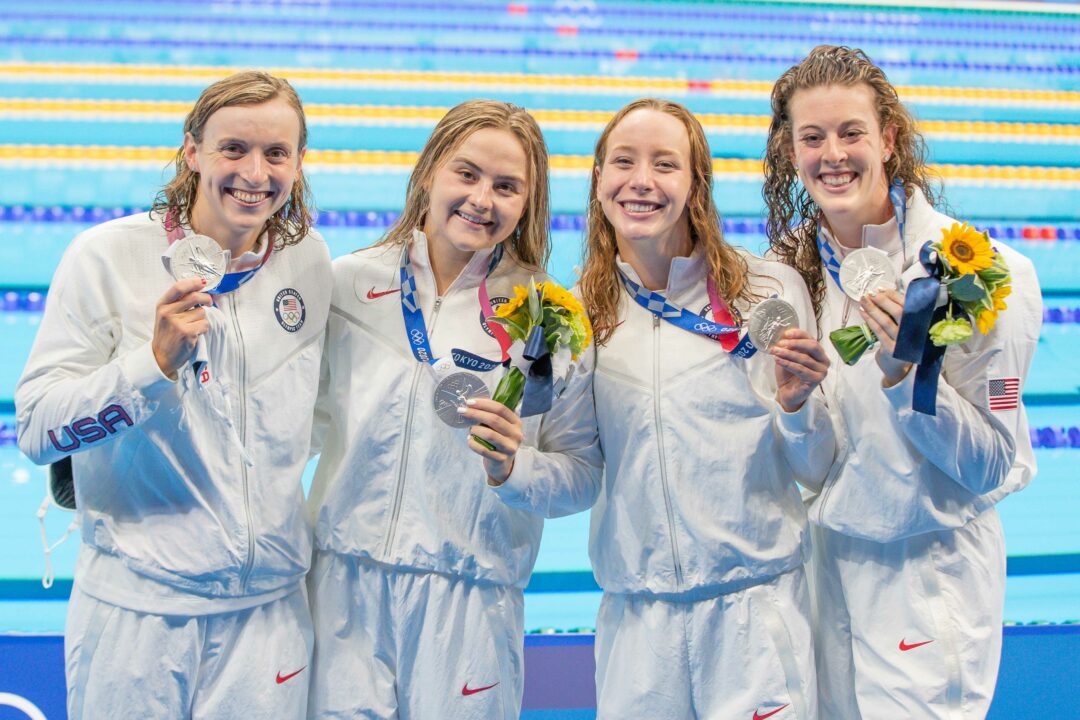 Just as it happened in 2019, the American women swam quicker than the former world record in the 4x200 free relay but wound up with a silver medal. Archive photo via Jack Spitser/Spitser Photography

The final race of day 6 finals at the Tokyo Games was an absolute dog fight until the very end. The Chinese and Australian contingents passed the lead back and forth for nearly the entire race, all the while nearly a body length ahead of world record pace.

The USA seemed to be out of contention for gold until the last leg of the race when powerhouse Katie Ledecky overtook Australia and bearly ran down Chinese anchor Li Bingjie. While Katie Ledecky managed to out-split Bingjie’s 1:55.30 closing split with a 1:53.76, China had too much of a lead and finished the race in a 7:40.33 to the USA’s 7:40.73.

When the Australians came into the wall with a 7:41.29 for bronze, all 3 of the top teams had swum under the former world records held by the Aussies (7:41.50) from the 2019 World Championships.

While the biggest storyline here is China’s stellar performance, there’s also something important to note about the USA’s performance. Their swim at the Tokyo 2020 Games marks the second straight time that the American team swam under the former world record in a 4×200 freestyle final but wound up coming second place, thus not achieving an official world record.

At the 2019 World Championships, the American team of Simone Manuel, Katie Ledecky, Melanie Margalis, and Katie McLaughlin swam a 7:41.87 American record to take second place to Australia’s 7:41.50. Both swims marked the first occasions of any women’s 4×200 freestyle teams getting under 7:42, improving upon China’s 7:42.08 from the 2009 World Championships.

An Olympic and World Championships silver medal are enough to be proud of on their own but it would be equally as tough knowing that one was within less than half a second of the gold medal and world record.

Zhang Yufei with the performance of the morning. That’s a brutal double.

Alot of hand wringing prior to the relay.

To think, I doubted team captain Allison Schmitt. Forgive me, I was wrong!

Furthermore, I have posted in another article Katie Ledecky’s prowess in the women’s 4 x 200 meter freestyle relay.

The proposed schedule eliminates the potential for session doubles whether the international competition is the Summer Olympics or the FINA World Aquatics Championships:

To my Australian friends,

You think the Australian Trials being closer to the Olympics (mirroring the US model) is here to stay? It seems most of your swimmers are performing very well compared to past Olympics.

One, the time zone difference between Australia and Japan, or lack thereof, has to be a factor.

Two, the coronavirus pandemic has not impacted Australia as severely as the rest of the world.

From what I hear, America’s top swimmers stayed in the pool the whole way thorough the pandemic – Dressel, Ledecky, Manuel etc. All of Australia’s top swimmers were out of the pool for 6 weeks or more. ( a lot more in Melbourne). some managed some winter ocean swimming.
If you want to argue time zones, is that the reason USA did well in Rio?
Pretty sure the trials will stay closer to the meet as Australia did this year and in 2019.
We have a great group of swimmers. That helps.

After having for many years out-of-reach “rubber suit” world record in 4×200 relay it was surpassed four times during last 2 years. But look how really tough it became. To beat it again each swimmer on the team has to be 55.0 performer.

Anyone know why Allison blacked out the TYR on her tech suit for the finals of the 4×200, but not in any other race?

I wondering that too…

Maybe she thought she could get away with it but was then told to hide it.

It is still difficult for me to process the fact the USA had a shot at gold medal. No shame in getting silver.