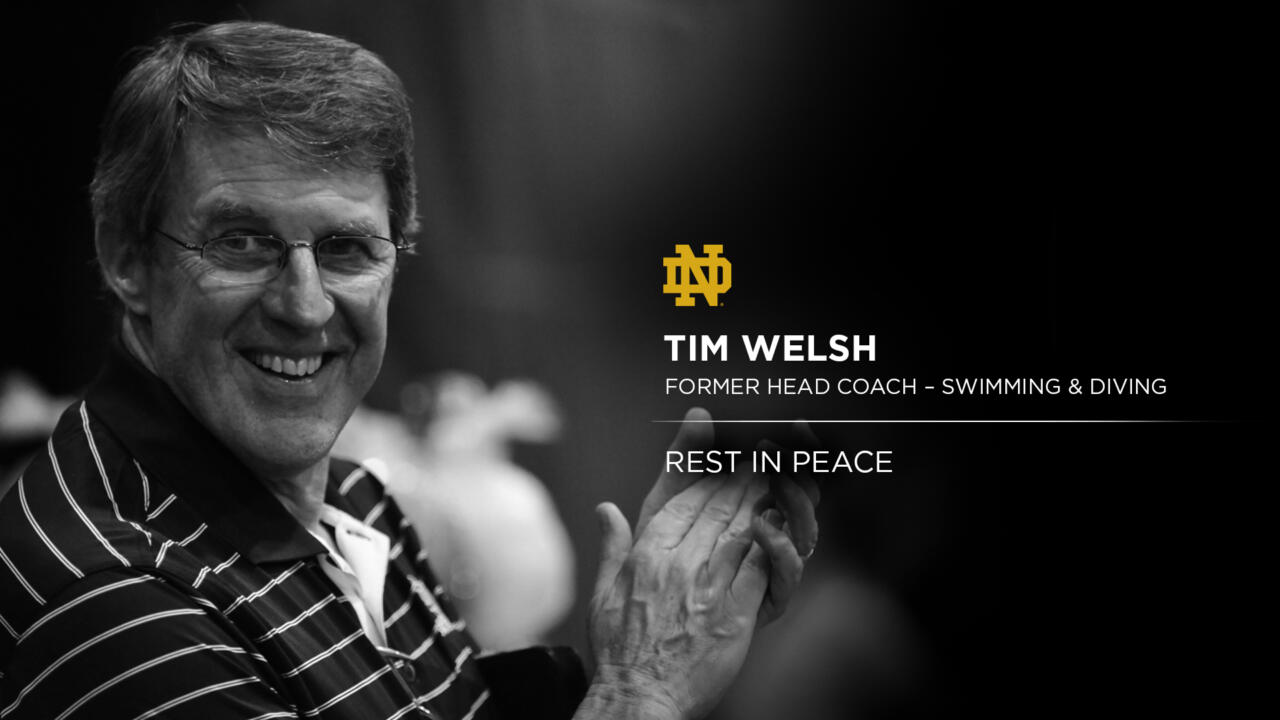 Tim Welsh, who led Notre Dame to 6 Big East titles in his coaching career, died on Wednesday at his home in South Bend. He was 76 years old. Current photo via Notre Dame Athletics

Welsh served as the head coach of the Notre Dame men’s and women’s teams at various points during his 30 years with the program. He coached both the men and women from 1985-1995, just the men from 1995-2014, and came out of retirement to lead the women’s team on an interim basis in 2014.

Under Welsh’s guidance, the Fighting Irish captured the program’s first BIG EAST title in 2005, and repeated the feat five more times during his career. Welsh received the National Collegiate and Scholastic Swimming Trophy, the College Swimming Coaches Association of America’s highest honor, and received the 2019 Notre Dame Monogram Club’s Jesse Harper Award, which recognizes a member for commitment and involvement with the athletic department and the university as a whole.

“It’s not often that an individual impacts not only a program, but a sport, in a profound way,” University Vice President and James E. Rohr Director of Athletics Jack Swarbrick noted. “Tim Welsh achieved major success in competition, but those who knew Tim will remember him most for his ability to develop the whole person. There was no better fit between University and Coach than Notre Dame and Tim, he was truly the embodiment of a true Notre Dame Man.”

“Tim Welsh was the ideal collegiate swimming coach,” Notre Dame head coach Mike Litzinger shared. “He was a student of the sport, a competitor, a mentor, an educator and, more importantly, a compassionate man who truly loved working with young people.

“Like Dennis Stark before him, Tim’s legacy is well woven into the fabric of Notre Dame. He will be forever a part of this program’s spirit and philosophy.”

Notre Dame produced the following video reflecting on his career upon his retirement in 2014:

Welsh coached the Irish men’s and women’s teams to a combined 333-188-1 dual-meet record beginning with his arrival at Notre Dame in 1985. His teams won 22 league titles (15 in the Midwestern Collegiate Conference, six BIG EAST Conference championships, one North Star Conference championship) and finished as runners-up on seven occasions (two in the MCC and five in the BIG EAST).

Under his guidance, the Fighting Irish captured the program’s first BIG EAST title in 2005 and repeated the feat in 2006, 2008, 2009, 2012 and 2013. Frank Dyer earned the program’s first All-America honor in 2012 and a then-record nine Irish swimmers competed at the 2013 NCAA meet. Notre Dame sent eight student-athletes to the NCAA Championship meet during Welsh’s final season in 2014.

During his tenure, Welsh’s student-athletes broke the Notre Dame record in every event–on both the men’s and women’s sides–on multiple occasions. In all, more than 200 University records were set under Welsh’s tutelage. The Irish established 12 such marks during the 2004-05, 2008-09 and 2011-12 seasons.

One of Welsh’s lasting impacts will undoubtedly be his leadership through a period of tragedy, as a 1992 bus accident claimed the lives of two Notre Dame women’s swimming student-athletes, Meghan Beeler and Colleen Hipp. Each year, the program gathers to honor their memory, and even this past season, Welsh joined current Notre Dame head coach Mike Litzinger and the current team at the Grotto on Notre Dame’s campus to honor the anniversary of the event.

In 2014, Welsh received the National Collegiate and Scholastic Swimming Trophy, the College Swimming Coaches Association of America’s (CSCAA) highest honor. The award is presented to an individual or organization for having contributed in an outstanding way to swimming as a competitive sport and as a healthful recreational activity in schools and colleges. Welsh received the Richard E. Steadman Award from the CSCAA in 1993. The award is given annually to a swimming or diving coach in the high school, club or university ranks who, in the opinion of the International Swimming Hall of Fame, Inc., and the CSCAA, has done the most to spread joy and happiness in swimming. Also, in 2019, Welsh was awarded the CSCAA’s Franklin Award, recognizing pioneering individuals or organizations whose efforts and innovations best promote the integrity and enhancement of the student-athlete ideal.

Notre Dame bestowed its Presidential Achievement Award on Welsh in 2009, recognizing a University employee who lives the University’s mission and is a role model exemplifying all of the school’s core values. Following his 29th season as head coach at Notre Dame, Welsh ranked behind only track and field’s Joe Piane (39 seasons) as the longest-serving athletic program leader at the University. He also was awarded an honorary monogram from Notre Dame’s National Monogram Club and saw six of his swimmers garner the Byron V. Kanaley Award, the most prestigious honor an Irish student-athlete can achieve.

Welsh was honored for his special service to the American Swimming Coaches Association (ASCA) and the sport of swimming by receiving the ASCA’s distinguished Ousley Service Award in 2004. One of Welsh’s key developments is the ASCA Fellows Program–which is designed to professionally and thoroughly prepare the next generation of coaching leaders. Welsh was named president of the ASCA in September 2009 with the term coming to a close in the fall of 2011.

Welsh received the CSCAA’s Distinguished Service Award for his 35 years of service in college coaching and was deemed the organization’s Division I men’s representative on its Board of Directors in 2009.

Welsh became the men’s assistant swimming coach at Syracuse in 1974, after leaving Winthrop College (S.C.) where he had taught English.

Welsh is survived by his wife, Jacqueline, who served as curator of education at Notre Dame’s Snite Museum of Art prior to her retirement, and their two sons, Tim and John, both Notre Dame graduates.

I always enjoyed talking to Tim at conferences and meets. A village of prayers for his family.

Thoughts and prayers go out to him and his family. Tim was the consummate gentleman. I appreciated any time he had for me. It was an honor to know him.

Always had time to talk to the young coaches and was very generous with his coaching ideas. On St. Croix he handed me gift certificates that allowed my entire team to have a free dinner. Special person. May he rest in peace knowing he made a huge impact on many.

Tim and I had a bitter disagreement about his support of the activities and ethics (IMO, lack of) of ASCA’s John Leonard one time, but I always had a tremendous amount of respect and admiration for him. He was a class act, he loved and cared deeply for the athletes he coached and was a man that was a tireless worker to better the coaching profession. Prayers to his family, friends and former athletes.

He will be missed. Prayers for his family.

Oh my lord. What a loss. Good Speed Tim. Have a seat at the distinguished table of great coaches in the sky…Rest assured you will be missed below but welcomed above.

He touched countless lives. None more than his athletes, but even a chance meeting with him was a memorable one.