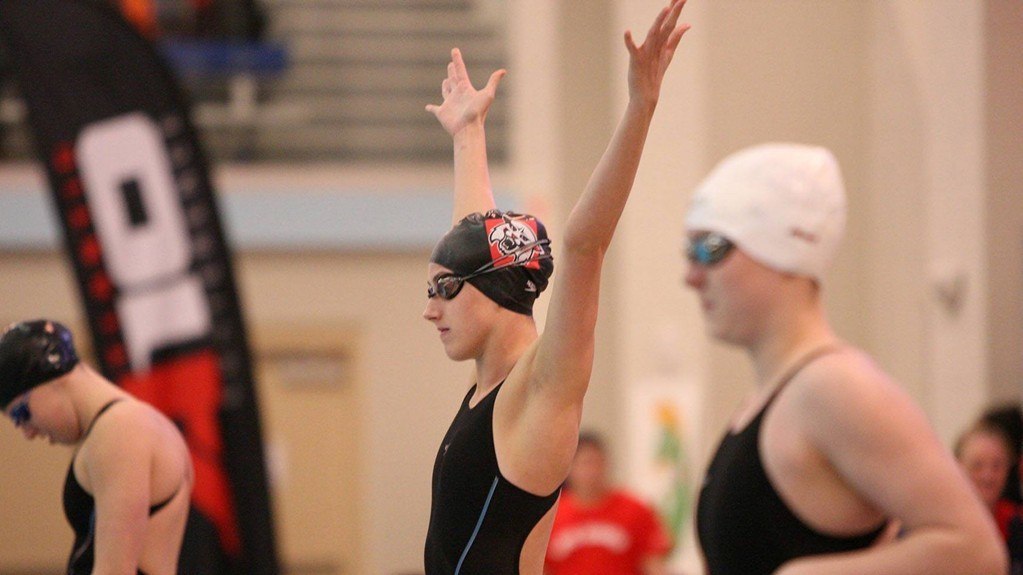 Swimming is most exciting during a close race with something on the line. It’s is a sport about racing. Beating... Archive photo via Davidson Athletics

The situation for Davidson entering the final event appeared grim. Asheville held a 136-125 lead. This meant that only a 1-2 finish in the final 200 free relay could bring them back. Asheville had triple event winner Morgan Rulevich leading off their relay. Earlier in the meet, Rulevich had won the 50 by a second and half. Asheville’s relay finished in 1:38.96, over a second ahead of Davidson’s top relay. However, a DQ by Asheville gave Davidson the 1-2 finish they needed and the meet win.

UNC Asheville head coach Elizabeth Lykins told the Bulldog’s website after the meet “The result was hard to swallow today. We raced and dove so well the entire day, and it was disappointing to see the miscues in the final event.”

Davidson were led by double event winner freshman Hope Carpenter (100 back, 200 back). Davidson also got event wins from Isabelle McElrath in the 100 fly and Maggie Farrell in the 100 free. VMI was also at the meet and beaten soundly by both squads.

A tie, a bit anti climactic, but exciting competition. Obviously, if any close race went the other way, the result of the meet would have been different. Perhaps the most exciting near miss was the medley relay where Xavier’s triple event winner and junior leader Emily Conners nearly ran down the Cleveland State medley relay. She dove in nearly even with Cleveland St’s B relay and 1.3 seconds behind their A. A 22.97 split was almost enough to run down Madi Jaszcz (24.20) who held on for a .1 win.

Another near miss was came from Cleveland St.’s Irena Weclawiak’s 500. She flipped in last place at the 450 a second and a half behind a nearly even trio of Xavier swimmers. She split a 29.89 final 50, out splitting all 3 Xavier swimmers by at least 1.3, but came up just short of a meet saving touch out finishing 6th, .25 short of 3rd.

Xavier won the swimming events 144-118, but a 26-0 edge in diving kept Cleveland State in the meet. Cleveland also got two event wins from Alana Cartwright in the 100 IM and 100 breast.

The Denver women were unable to close out Wyoming until the final relay. Wyoming and Denver split the individual events with 7 wins each. Wyoming scored 4 more points in individual events (135-131) aided by their diving and 200-500-1000 sweep, but Denver’s wins in both relays proved the decisive advantage.

The 100 fly was Utah’s last win of the meet. UCLA won the final three events to close it out, including a 3 second margin in the final relay.

We wrote a full recap of this meet. Read it here

Virginia Tech dominated the individual swimming events in this meet, winning 10 of 13. Ohio State kept it close by outscoring them 38-30 in the relays and 31-7 on the boards.

The meet was a double dual over two days with Penn State also competing. the two day format meant both the 200 and 400 relays were contested. Virginia Tech won both of the short relays and Ohio State won both the long ones.

(Note: this meet was actually part of a double dual with Penn State, who were less competitive)

(Although, let’s be real: Ohio State diving coach Justin Sochor was the real winner at this meet).

Another meet where diving proved decisive. Oakland took a 32-4 advantage on the boards which was just enough to overcome Wayne State’s 143-119 swimming points lead.

One thing I will add, the men’s meet was ridiculously close the whole time. Normally in meets that end up this close, the score swings back in forth between one team leading by 10 to the other. This meet had a 10 event stretch where the largest lead was 7. After the streak was broken there were two immediate lead changes. This score progression is about the platonic ideal of an entertaining meet:

Also the women’s meet was already decided by the time the final relays entered the water, but there was a lead change after every swimmer. Good stuff.

If there’s one thing that’s clear after this weekend, it’s that Pepperdine and Loyola Marymount are pretty evenly matched teams. The two teams dualed twice over the weekend (San Diego was also there) with each winning one meet by a narrow margin. Adding up the scores from the two meets give Pepperdine a slim 265-264 advantage.

Pepperdine held a 32-0 diving advantage in both meets (they did the 1 meter twice both days), so it was a bit odd that the meet that they won was the one with more swimming events, day 2. In that meet they actually had to swim their way back from a deficit without help from their uncontested diving advantage. After the second and final diving event on day 2, there were 7 swimming events remaining and Loyola held a slim 83-80 lead. The Pepperdine swimmers rose to the challenge, winning 4 of the final 6 events to pull out an 11 point win.

Loyola’s day 1 win was keyed by their utter domination of the second half of the meet. After the second diving event they were behind 70-55. Loyola won the next 5 events, out scoring Pepperdine 62-32 over the stretch.

George Mason, 7th in the A10 last year, beat defending A10 champions Duquesne on a final relay DQ by the Dukes. The two day A10 Classic also featured St Bonaventure, La Salle, and St Louis.

Mason was led in the pool by double event winners Brittany Murphy (50 free, 100 free) and Megan Cummins (1650, 500). They also got a sweep on the boards from Marina Toon. Abby Stauffer (100 breast, 200 breast) was the lone double winner for Duquesne.

Duquesne coach David Sheets told the Dukes website of his team, a defending conference champion that only graduated 2 of their top 10 swimmers: “We are continuing to search for our identity as a program.  With all the new faces it is a learning curve for everyone.”