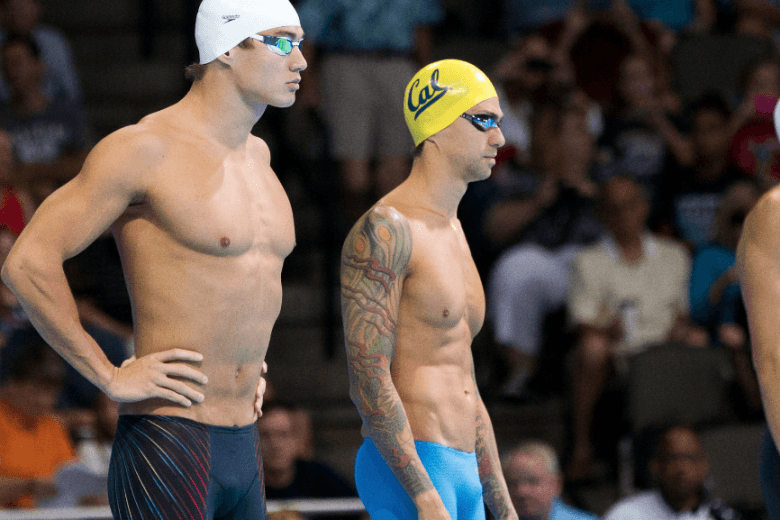 After letting Jesse present his dream team of ladies from Team USA for his Swim Bachelor post, we wanted to balance it out with the female perspective. Contributor Candace is one half of “Eve and Candace,” two swim vloggers who have been supporting the sport since before the 2008 Olympics in Beijing.

Like me, I’m sure you’ve all read the Swim Bachelor’s take on finding love amongst the female swimmers of the U.S Olympic Team. As a dedicated follower and enthusiastic observer of the male members of the team, I am here to offer my personal take on the topic. Over the years I have thought – more like daydreamed – about potential romances with pretty much every single member of the team and am here to provide the female perspective on such matters.

If the executives at any major network were smart enough to put together a riveting and semi-scripted show like “The Bachelorette: Swim Edition” I nominate myself and my co-hort Eve to not only cast the show, but to serve as the first ever Bachelorette duo. Non-swimmers need love, too! Our casting decisions would, of course, be tasteful. With respect to ladies like Rebecca Soni and Annie Chandler who are both involved in serious relationships with otherwise eligible Swimmers, we are opting to leave their men out of the ranking. But do not fret; there are still plenty of eligible specimens to choose from.  Let’s take a look at the list of potential Bachelors.

I mean, have you seen this guy? He’s practically an Adonis – and I have the side by side shot to prove it. Not only is he an incredibly talented swimmer with 11 Olympic medals to his name, he is cool as a cucumber.  What other swimmer do you know has had to undergo knee surgery for a – and I’m not kidding – break dance injury? Ryan is a unique snow flake of a man that is 100% himself 100% of the time.  Sure, he might not recite Shakespearean sonnets while making you hand rolled sushi but he will scream “jeah!” at frequent intervals while helping you shop for a very necessary pair of blinged out sneakers. Sounds like a good time to me!

After Nathan’s nail biting finish in the 100M Freestyle, millions of unsuspecting women across America let out a collective sigh. What a dreamboat! Not only is he now an Olympic gold medalist but he’s so tall! One cannot underestimate how many negative qualities most women are willing to overlook for a little height. But that’s the thing, as far as I can see he has no negative qualities. He’s not only a powerhouse swimmer but he has a permanent smile plastered across his face and the charm to back it up. And he loves his mom. I’m thinking this guy is marriage material. Ok, so he might not be the cleanest of roommates (re: Matt Grevers’ tweets about how messy their shared room in London was) but I’m guessing he was too busy to clean. Busy, as in representing the United States of America at the Olympics. Forgiven!

Not only does Nick Thoman have a ton of heart, making it into the 2012 Olympics after failing to make it through trials in 2004 and 2008, but have you heard his voice? That voice is silky smooth, movie trailer, car commercial voice over, audio book recording caliber. Oh, and how’s this for charming – he’s going back to school! As if winning a silver medal wasn’t enough, Thoman is getting an education. That’s right, ladies, Mr. Thoman is an academic – an academic with great teeth. But don’t let his sweet smile fool you, this guy can hang with the best of them.  He’s made it through Dave Marsh’s house of pain! But when he’s not climbing ropes straight out of the pool maybe you can convince him to read you a bed time story. Swoon!

Anthony is the comeback kid. After taking a 12 year break from swimming he made it into the US Olympic Swim Team at age 31. Now here’s a guy who will recite Shakespeare – as evidence by his pre-race tweets. Not only is he a fan of great literature but he’s got that whole bad boy thing working for him as one of very few swimmers showing off a sleeve of tattoos on the starting block. He might not have medaled in the 50M freestyle, but his story of redemption and determination has him ranked pretty high in our hearts.

Come on, how could we fail to include the most decorated Olympian of all time? Michael is literally The Greatest – and he loves his Momma! And we’re sure that after growing up in a house of women, he knows how to treat a lady – and probably respects your personal space. Alright, so he may or may not know how to do his own laundry but with his wardrobe consisting of 90% Speedos, 9% hoodies and 1% actual pants, it shouldn’t be a problem. Plus now that he’s retired he’s got a ton of free time on his hands – vacation, anyone?

As you can see, the 2012 US Olympic Swim Team is chock full of eligible and interesting men. If I can’t get the execs at ABC on board I am more than willing to finance the project myself – just a girl with a hand held camera and a dream. Who’s coming with me?

Based in New York City, Candace is one half of “Eve and Candace” the world’s foremost unknown swim vloggers. Brought together by their obsession with the 2008 Olympic Games, a questionably unhealthy love for Michael Phelps and subsequent interest in swimming, Eve and Candace have been providing the unsuspecting world with their humorous take on everything relating to competitive swimming for over 3 years via YouTube. With vlog topics ranging from Speedo design to magazine covers, Eve and Candace offer a unique view of the swimming world through the lens of pop culture.

They need to do this again from a gay male perspective…. the results might be a lil different.

Does Anthony Ervin have a girlfriend?

Nathan for me please!! haha

Put Cullen Jones on this list. He’s a hottie and seems nice.

I just love Nathan Adrian! He’s so sweet and always smiling and everyone on the team seems to love him. He seems like a genuine nice and humble guy. I would definitely take him home any day. And of course he’s so hot! Add Cullen Jones and I’d be the happiest woman on earth!!

Nathan Adrian kinda reminds me of Keanu when he was younger (like he was in “Flying”). Well.. Nathan has a better tan, and is buffer and way sexier… but something about that cheesy grin!

Nick Thoman’s voice did make me swoon a bit… I would buy that audio book.