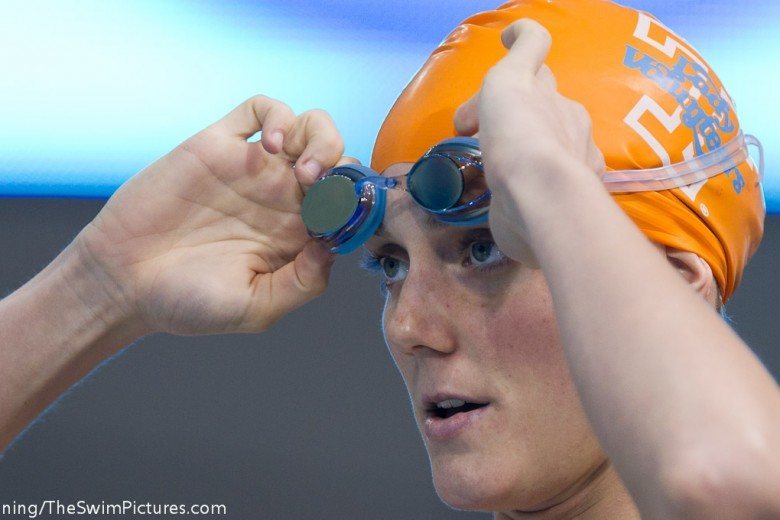 Kendricks, the most recognizable voice in swimming in the United States for over two decades, was diagnosed with Merkel cell carcinoma in August 2021.

With SCM to SCY converted sprint freestyle times that rank among the NCAA’s best, Nikonova is a huge addition to the Florida squad.

The LAC team of Evan Pan-Wang, Charlie Wang, Lily Andruss and Kennedi Southern combined to break a pair of 11-12 NAGs in the mixed medley relays.

It’s not quite time for swimming fans to exhale yet. This upcoming week, we’ve still got the open water 10k in London’s serpentine (full preview of that event here), and the 2012 U.S. Open in Indianapolis, Indiana.

The “U.S. Open” designation makes this meet a National Championship, but available to swimmers of all nationalities both in prelims and finals. Sometimes this is restricted when the meet is being used as a World Championship selection event, but this year it’s fair-game for all.

Many countries are taking advantage of that opportunity. The Brits are sending 21 of their top young swimmers over, including butterflier Jack Marriott, backstrokers Jessica Fullalove and Georgia Hohmann, and breaststroker Molly Renshaw, who despite meeting the FINA automatic qualifying time at Britain’s Trials in March was not taken to the Olympics as a second entry in the 200 breast.

Other major squads that will be in attendance include groups from

For the Americans, this meet will serve as their only selection meet for the 2013 World University Games in Kazan, Russia. The top two swimmers who are also college students this coming year (though not necessarily competing in NCAA swimming) will be eligible to make the trip. This two-per race came after some debate when the plan initially was only to take a half-roster of 26 total swimmers. Now, there can be up to 52 swimmers, which is generally speaking enough to cover top two in all individual events. Full selection criteria here.

This meet, combined with the Olympic Trials and Olympic Games, will be the official American selection meet for the Short Course World Championhips in Istanbul, Turkey. Many big swimmers decline invites to that meet, especially in Olympic years so this could be a chance for a lot of swimmers to break-through. Even in 2010, an off year, the world was introduced to one Missy Franklin, who took silver in the 200 back even though Liz Pelton and Elizabeth Beisel were entitled to the spots.

Here’s some big races to watch at the U.S. Open this year:

1. Men’s 100 Free – The Australians are bringing three outstanding sprinters to this party. That includes the Abood brothers – older brother Matthew was on Australia’s World Championship 400 free relay at last year’s World Championships. They also bring former teen phenom Kenneth To, now just past his 20th birthday. The real shining star, though is France’s 20-year old Mehdy Metella – the best kept secret in the country’s rising swimming program. He has a best of 49.17 in the 100 free, and a 52.8 in the 100 fly. He will be the number-two seed in this race. The Americans’ two answers will be Tyler Reed, a Kentucky post-grad, and Aaron Wayne from Stanford, both of whom cracked 50 seconds at Trials.

2. Women’s 200 Fly – The best night of this meet might be the first. Aside from the 100 free above, we’ll also see the women’s 200 fly. 2008 Olympian Kim Vandenberg comes in as the favorite, but Kelsey Floyd from Tennessee’s vaunted butterfly program and 2011 World Championship team member Jasmine Tosky are close behind. Tosky struggled at the Olympic Trials, and we’ll find out in Indy what she’s been doing since then. Floyd shocked a lot of people by finishing 4th in both butterfly events at Trials. Pushing the Americans will be Great Britain’s Elena Sheridan. She’s only 16, but has already been a 2:10.40 en route to the 2011 European Junior title.

3. Men’s 400 Free – Men’s 400 frees are rarely “top races” in American competition of late, but this one could be a great one. It will feature three finalists from the U.S. Olympic Trials: Michael Klueh, Ryan Feeley, and Michael McBroom who other than McBroom will all soon be training together at Michigan. Close behind them is former National Team’er Sean Ryan, another Michigan Wolverine, and Jan Daniec from Virginia. Trying to spoil the party will be Australia’s Robert Hurley. Hurley is a former World Record holder in the 50 short course backstroke, but is truly a middle-distance specialist. He is the third-fastest Australian in this 400 free this year.

4. Women’s 100 Back – Georgia Bulldog Megan Romano, a finalist at the Olympic Trials, will be looking to dip under a minute for the first time and is a huge favorite to make a second-straight WUG’s team. She will be chased, though, by Cal’s NCAA Champion Cindy Tran, who seems to have made big leaps in her long course swimming this summer. Bonnie Brandon, that other incredible high school backstroker from Colorado, has a top 5 seed as well. She was the country’s highest-ranked recruit in the class of 2012 and will be going to Arizona next season. The international lineup here is just as, if nore more, exciting, though. Japan’s timeless Noriko Inada, at 34-years old, is the number two seed, and all will be going against a phenomenal British trio of Lauren Quigley, Jessica Fullalove, and Georgia Hohmann. The three are 17, 16, and 18 respectively, and are quite reminiscent of the Gemma Spofforth-Lizzie Simmonds group that we saw go through Britain’s junior level a few years ago en route to European and World Records.

5. Men’s 200 Back – This race could mirror pretty closely the 200 backstroke final for the 2020 Olympics (if not 2016). Top American juniors Jacob Pebley and Jack Conger, both Olympic Trials finalists, won’t see countrymate Ryan Murphy in this race, but they’ll get the best teens from the UK and Australia instead. British 19-year old Craig McNally and Australia’s Josh Beaver both have bests at 1:58, like their American counterparts. New Zealand’s Kurt Bassett and France’s Eric Ress are both in their very-early 20’s, but fall into that same time range.

6. Men’s 200 IM – This battle looks like on paper to be a two-man battle, as it will square off Australia’s Kenneth To, a former Australian Junior Record holder and their fastest overall in 2011, against Texas Longhorn Austin Surhoff, who across-the-board had a phenomenal Olympic Trials in late June. They are the only two who are seeded under two minutes, but watch out for spoilers in Arizona’s Cory Chitwood, a phenomenal backstroker, and former National High School Record holder Kyle Whitaker of Michigan. Whitaker had a solid Olympic Trials, but looked like maybe he was saving his full taper for this meet rather than battling Michael Phelps and Ryan Lochte for IM spots on the Olympic Team.

7. Women’s 200 Breaststroke – This race will be a mini-preview of next year’s NCAA Championship final. Andrea Kropp, preparing to begin her first season with USC after a redhisrt transfer year, will be the top seed followed by Texas’ Laura Sogar, who has had a phenomenal summer of long course swimming. Louisville’s Gisselle Kohoyda is little-known but loaded with talent, and Haley Spencer is a former NCAA Champion. Emma Schoettmer is the top breaststroke recruit in next year’s freshman class, and all of them will match up with Britain’s Molly Renshaw, who at only 14 has already been a 2:26.8.

McBroom going to Michigan too?

How can you tell that Whitaker looked like he was saving his taper for US Open?

I have a question. For swimmers that are retiring, like Phelps and Berens, are two more slots on the national team created? If you take the top 6 times in the 200 free for example, will it still be the top 6 times but only 4 swimmers or do Tarwater and Klueh get the nod for that event.

you still have to be in the top 16 in the world, so if they still are that, then probably so

Not for national team you don’t. That is only for the athlete partnership agreement. National team is strictly top 6 times.