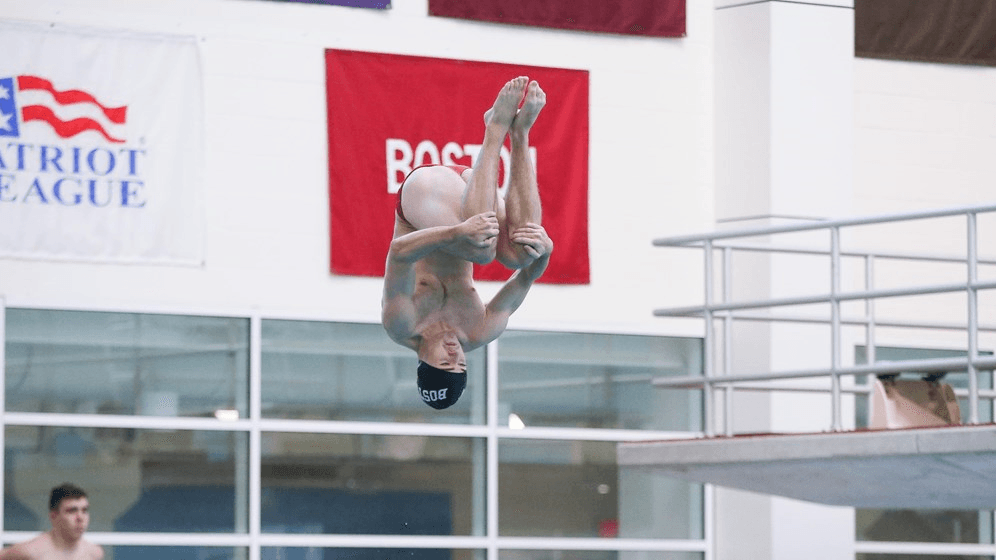 The Terrier women topped the podium 10 times and swept three individual events, while the men posted 13 first-place finishes in a sweep of UMass on Saturday. Current photo via Boston University Athletics

Bray was involved with various projects in the Gainesville community over his four years as a Gator.

The Terriers topped the podium 10 times and swept three individual events. Sydney Lee led the team with three individual victories, touching the wall first in the 100, 200 and 500 free. Julimar Avila, Brittany Steinfeld and Allison Winter also posted impressive outings, as each won a pair of events.

Stuart Vickery and Trevor Winans led the Terriers with three first-place finishes. Winans swept the free events, dominating the 100, 200 and 500 races. Vickery took both the 100 and 200 fly and also aided the 200 medley relay to victory. Kevin Gu, and Judson Balding each earned a pair of second-place finishes, while Cameron Schoffstall won both the one-meter and three-meter diving events. Alex Ewart, Judson Balding and Michael Choate additionally posted first place finishes on the day.

Next up, BU will host the Terrier Invitational Nov. 16-18 at Competition Pool.

BOSTON, Mass. – Katie Polk and Maja Boric finished one-two in both dives as the University of Massachusetts women’s swimming and diving team fell to Boston University on the road 176-124 on Saturday afternoon. Polk took the top spot in the 3-Meter Dive with the highest score for UMass in the dive this season with a mark of 310.35 after Boric took first in the 1-Meter with a mark of 287.95.

Polk scored 277.87 in the 1-Meter Dive to finish as the runner-up while Maggie Martin closed out the top-five. Boric took second with a score of 272.02 in the 3-Meter Dive to complete the sweep of the top-two spots for the Minutewomen.

Ansley Baker picked up a pair of wins on the afternoon beginning with a swim of 1:05.58 in the 100 Breaststroke as UMass claimed the top-two spots and three in the top-five as Chelsea Meiring finished as the runner-up while Mia Flagiello came in fifth. Baker went on to add her second win of the day a few events late in the 50 Freestyle with a time of 23.94 as Meiring and Emily Rudiman finished in fourth and fifth respectively.  Baker also helped the Minutewomen into a meet-opening relay win in the 200 Medley, combining with Maddie Biron, Rachel Grant and Mariam Labib to finish first with a time of 1:46.49.

Labib added a pair of third-place finishes in both the 100 and 200 Freestyle, first in the 200 as the Minutewomen picked up four points in the race before the sophomore’s time of 53.59 in the 100 Free gave her another third-place showing.

Rachel Grant swam a 57.72 in the 100 Butterfly to finish second while Stephanie Judge came in fourth with a time of 57.72. Sydney Aubin added a second-place finish in the 200 Backstroke with a swim of 2:10.47 as Meghan Gray went on to finish fourth in the race.

Maddie Biron took third in the 100 Backstroke with a mark of 59.81 while Gray picked up more points for UMass as she rounded out the top-five finishers.

Kelly Malyszka added two third-place finishes on the afternoon, beginning with a time of 2:32.44 in the 200 Breaststroke while Samantha Schieffelin took fourth before taking third again in the 400 IM with a mark of 4:39.32 with Olga Egkorova touching the wall shortly after.

BOSTON, Mass. – Luther Gordon won his second straight 100 Backstroke race and third on the year to lead a Minuteman sweep of the podium in the event as the University of Massachusetts men’s swimming and diving team fell to Boston University 189-111 on Saturday afternoon. Gordon’s top time of 57.88 led a UMass sweep as Al Madden and Owen Churchwell were next to the wall to give the Minutemen 16 points in the event.

The junior went on to put together a runner-up showing in the 200 Breaststroke with a mark of 2:08.98 followed by Ben Gryski in third.

Seamus Trzewik-Quinn recorded the winning swim in the 100 Backstroke with a top-time of 52.23 to pick up nine points while Kellen Gray rounded out the top-five finishers to give UMass 10 points for the event. Trzewik-Quinn and Gray each helped UMass pick up a few more points in the 200 Backstroke later in the meet as they finished fourth and fifth.

Reece Donahue added his third straight win in the 1-Meter Dive with a top score of 288.75 as teammates Jordi Boulerice, Casey Chung and Noah Kanner rounded out the top-five. In the 3-Meter Dive, Donahue finished as the runner-up with a score of 271.12 while Boulerice and Kanner finished third and fourth respectively.

Harry Ortof led the way for all Minutemen in the 1,000 Freestyle as the junior’s time of 9:49.48 was good enough to earn him second in the race.

Casey Ransford picked up a pair of third-place finishes in the Butterfly events, first with a time of 1:55.27 in the 200 Fly while Jason Rosen rounded out the top-five before Ransford went on to finish third once again in the 100 Fly with a mark of 52.48. Ryan Pedrick added a top-three showing in the 50 Freestyle with time of 21.30 while Chase Kent closed out the individual events for the afternoon with a time of 4:14.95 in the 400 IM to finish third.