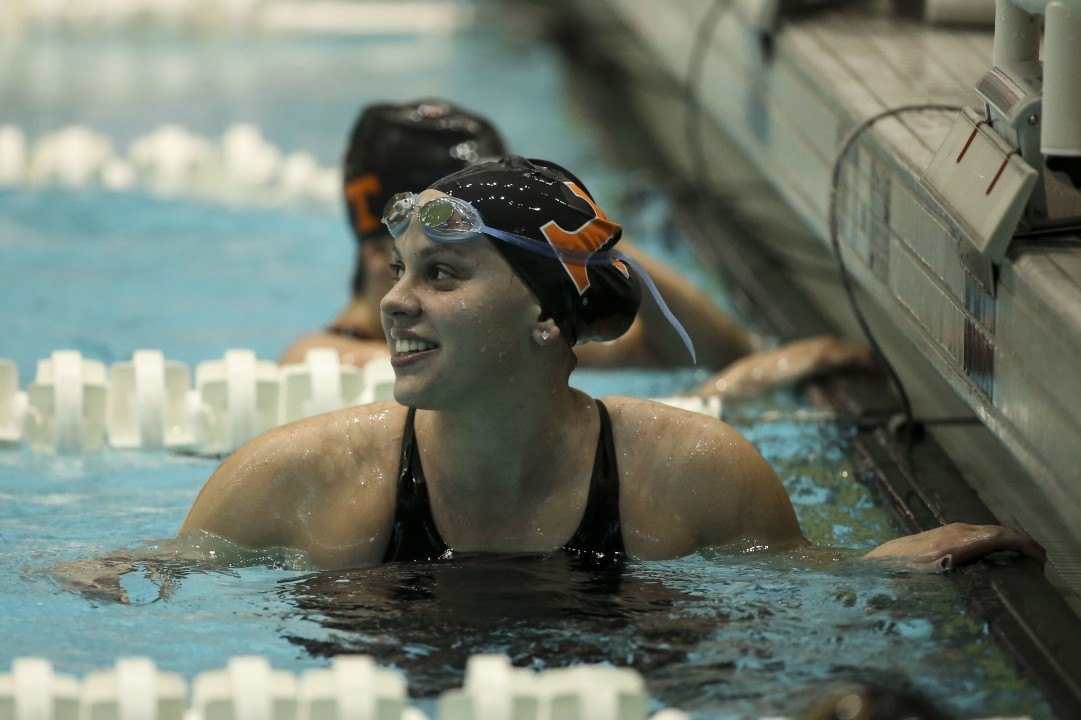 Tennessee's Maddy Tegner picked up her 3rd win of the weekend, sealing her sweep of the distance freestyles with a 10:08.00 in today's 1000 free. Archive photo via Craig Bisacre/Tennessee Athletics

Day 2 of the Tennessee-UNC dual meet saw the Volunteers take the win on both the men’s and women’s sides. Tennesee’s Sam McHugh pulled off another successful double, showing off his range and versatility with wins in the 1000 free (9:05.54) and 400 IM (3:51.69).

Senior Jordan Merrilees tacked on another 2 wins to his weekend total for the UNC men. Building on his successful double from yesterday, Merilees took a sweep of the backstroke events with his 48.56 in the 100 back. He also won the 200 free, where he clocked a 1:37.75.

On the women’s side, Tennessee’s Colleen Callahan and Maddy Tegner picked up their 3rd wins of the weekend. Tegner’s victory came in the 1000 free, where she clocked a 10:08.00 to sweep the distance freestyles. Callahan, on the other hand, was the 200 breast champ in 2:18.15, giving her a sweep of the breaststrokes.

UNC’s Hellen Moffitt, an Olympic Trials finalist, pulled in a pair of wins for the Tarheels today. A close race with Tennesee All-American Kira Toussaint saw Moffit land the win by a few tenths. She finished in 53.22 to Toussaint’s 53.53. Moffitt then went on to win the 100 fly in 53.06.

KNOXVILLE, TENN. – The University of North Carolina men’s and women’s swimming and diving teams concluded their two-day dual meet against the University of Tennessee Saturday morning at the Allan Jones Aquatic Center.

After the first day, the Tar Heels were locked in a close battle with the Volunteers but the traditional Southeastern Conference power pulled away on the second day to prevail against Coach Rich DeSelm’s UNC teams.  The Tennessee women won by a score of 205-167 while the Volunteers’ men’s team notched a win 216-156.

“The two-day format we used to swim Tennessee this weekend allowed us to see a lot of our team members swim multiple times. That plus having second heats in most events helps us better know where we are and what we need to work on when we get back to training Monday,” said 10th-year Tar Heel head coach Rich DeSelm.  “Overall, we were more competitive with a strong Tennessee team on Friday. Today we needed to be more competitive. Credit UT head Matt Kredich, his staff and team for being ready.

“Overall, we were better than two weeks ago, but needed to be better still to come out victorious as a team. We will get back to training Monday and keep preparing.”

Carolina’s men were led by senior Jorden Merrilees, an Australian native and transfer from Oakland University.  He swept four individual events to lead the Tar Heel cause.  On the women’s side, senior co-captain Hellen Moffitt took the top placing in three individual events while also swimming on a victorious relay.

Jack Nyquist had a tremendous meet on the boards to lead UNC’s diving contingent, sweeping the one- and three-meter boards.  His score in three-meter diving came within a point of breaking David MacDonald’s school record set back in 2009.  He also finished third in platform diving.

“Our divers continue to compete well,” added DeSelm.  “Tennessee is known to have a tremendous diving program so we knew the contests would be pretty intense. It was great to watch some tremendous diving from both teams. Coach Abel Sanchez and the divers were ready and competed extremely well. Senior Jack Nyquist won both the one- & three-meter boards while Elissa Dawsonwas first on three-meter and third on one-meter and Maria Lohmann finished second on both boards. Our depth in diving is getting better so we are excited to see more from the divers.”

Tar Heel senior women’s captain Hellen Moffitt also swam outstandingly in individual events.  She won the 200-yard backstroke in 1:58.72, eclipsing UT’s Micah Bohon by 1.95 seconds.  On Saturday, she went on to secure two more wins.  She took the 100-yard backstroke in 53.22 in a tight battle with UT’s Kira Toussaint.  Just two events later, Moffitt turned in a dominant performance in the 100-yard butterfly, winning in 53.06, 1.33 seconds ahead of the Volunteers’ Heather Lundstrom.

UNC divers, ably led by coach Abel Sanchez, were a key factor on the both days.  Elissa Dawson and Maria Lohman went 1-2 in three-meter diving with Dawson far ahead of the field in a big way with a score of 377.93, less than seven points off her own school record.  Lohman was the runner-up on the one-meter board and Dawson took second place in platform diving.

On the men’s side, Jack Nyquist was his steady and consistent self as he scored 363.75 points to win one-meter diving by less than a four-point margin over Tennessee’s Liam Stone.  He came back to win the three-meter event with 446.93 points.  It is the second highest three-meter diving score in UNC history, just behind David MacDonald’s three-meter score of 447.50 from 2009.  On Saturday, Nyquist was third in platform diving while freshman Bryan Allen excelled with a runner-up finish in the event.

Carolina senior Jorden Merrilees had tremendous Friday and Saturday sessions as he emerged as the swimmer-of-the-meet for the Tar Heel men’s side, winning four events overall.  On Friday, the Australian won the 500-yard freestyle in 4:26.14, almost four full seconds over junior teammateHenry Campbell.  Just minutes later, Merrilees led a 1-2 finish in the 200-yard backstroke with fellow Tar Heel Heyward Harrison, winning in 1:47.08.  He continued his dynamic performance on Saturday as he won the 100-yard backstroke in 48.56 seconds, 1.45 seconds ahead of Tennessee’s Joey Reilman.  Shortly after that the Aussie was well ahead of the field in the 200-yard freestyle as he won in 1:37.75, 1.5 seconds ahead of Kyle Decoursey of the Volunteers.

“To mention a few individuals that stood out senior Hellen Moffitt had a nice weekend with wins in the 100 fly & back, 200 back and helping our 400 medley relay take the win,” DeSelm says. “Other standouts for us were Caroline Baldwin, winning the 50 & 100 frees and as part of two winning relays on Friday. For the men, Jorden Merrilees keeps showing his abilities and took wins in the 100 & 200 back and 200 & 500 freestyles.”

On Friday, the Tar Heel men had solid finishes in the 200 IM as Eugene Tee, Michael Meyer andMichael McBryan went 2-3-4.  The UNC women produced a similar 2-3-4 finish in the 500-yard freestyle with swims from Macey Arnold, Bryanna Cameron and Caty Hulsey.  The UNC men also went 2-3-4 in the 200-yard butterfly behind Collier Cobb, Michael Meyer and Henry Campbell.

UNC will open its ACC season when it travels to Louisville, Ky., on November 4& 5 to meet the University of Louisville Cardinals.

KNOXVILLE, Tenn. — Behind 11 individual victories and four relay wins Saturday, the Tennessee swimming and diving team outpaced North Carolina on the second day of the meet for a sweep in the season opener.

The Tennessee men collected eight more wins on the second day of the meet to finish with 14 first-place finishes in a 216-156 victory over the Tarheels. The UT women won seven events Saturday to end with 12 overall in the 205-167 win.

“I was most impressed across the board with our team’s level of preparation for this session,” Tennessee head coachMatt Kredich said. “They didn’t show any signs of fatigue from either yesterday or having an early morning.”

Junior Sam McHugh led the way with four total individual victories with two of them coming on Saturday. He won the 1,000-yard freestyle in 9 minutes, 5.54 seconds, and then took first in the 400 individual medley in an NCAA B-cut time of 3:51.69.

“Sam made a pretty definitive statement in the 1,000,” Kredich said. “I thought our team took a lot of confidence in that. We had some really inspiring performances from people like Matthew Dunphy, Ryan Coetzee and Kyle DeCoursey. When a team sees their teammates racing with a lot of heart, all through a race, not just at the finish, it inspires everybody.”

On the women’s side, senior Colleen Callahan was a three-race winner for Tennessee. After winning the 200 IM and 100 breaststroke Friday, she added a win in the 200 breaststroke in 2:18.15.

“We’ve had a lot of injuries and sicknesses in the last two weeks to people that are among our best swimmers, we really had some people rise to the occasion like Tess Cieplucha, Alex Cleveland and Colleen Callahan,” Kredich said. “I am really pleased with the breadth of high-level performances across the team.”

INSIDE DIVING: Rachel Rubadue, reigning SEC Freshman Diver of the Year, added to her second win of the weekend with a victory on platform in 318.60. Emily Pelletier took third in a career-best 255.15.

“For us to compete on the platform at this time of the year against quality competition is just invaluable in our preparation for the championship season down the road,” diving coach Dave Parrington said. “This is the earliest we’ve ever had a quality platform meet, it showed a lot of what we need to work on.”

UP NEXT: The Vols have a busy week ahead with a home meet against Louisville on Oct. 27 and a double-dual meet the next day against Kentucky and Indiana in Lexington, Ky.