Tennessee Men and Women Beat Louisville on the Road 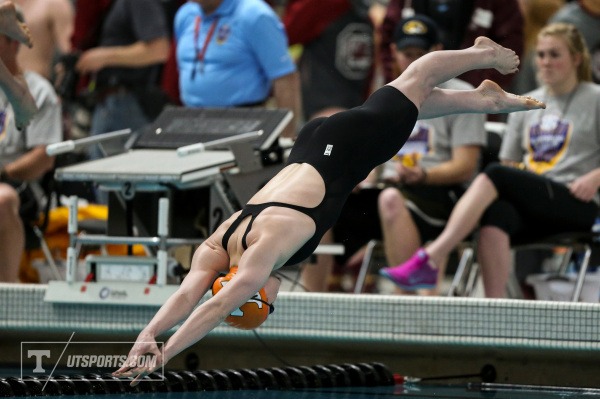 Tennessee’s Micah Bohon, Erika Brown, and Tess Cieplucha led the way for the Volunteer women as they took down Louisville last Thursday. Bohon swept the backstrokes races, getting her hand to the wall first in a tight race against Louisville’s Alina Kendzior, 54.43 to 54.73, in the 100 back. In the 200 back, she came from behind, running down teammate Meghan Small (1:57.21) on the back half to win in 1:57.15. Brown also picked up a sweep with her performances in the butterfly races. She got the ball rolling with a 1:57.32 in the 200 fly and finished off the sweep with a 52.70 in the 100 fly.

Louisville had 2 swimmers pick up multiple individual wins: Mallory Comerford and Mariia Astashkina. Reigning NCAA champ Comerford topped the field with a 1:45.60 in her signature 200 free. She came back to set the pace in the 100 free, swimming to a 48.56 ahead of Tennessee’s Stanzi Moseley (49.69). Teammate Astashkina swept the breaststrokes, tying fellow Cardinal freshman Morgan Friesen with a 1:02.55 in the 100 breast before coming from behind to beat Friesen (2:14.15) in the 200 breast with a 2:13.72.

On the men’s side, there were no multiple event winners, but Peter Stevens, Kyle Decoursey, and Sam McHugh were among several winners for Tennessee in their victory over the Cardinals. McHugh held off a charge from Louisville’s Carlos Claverie (3:54.45) in the 400 IM, pulling away from him further on the freestyle leg to win in 3:52.88. Breaststroke standout Stevens topped Claverie, 53.93 to 54.83, in the 100 breast.

Tennessee junior newcomer Colin Zeng, already a two-time SEC Diver of the Week, led the Vols with two events on the men’s side. He won the 1-meter springboard with a score of 357.00 and then set a facility record with a season-best 439.65 on 3-meter as part of a 1-2-3 Tennessee finish.

The Tennessee men had an all-around team scoring effort in the pool with six swimmers winning a race.

Both the men and women led off the meet with a win in the 200 medley relay. Louisville won the 400 freestyle relay to end the meet.

Head Coach Matt Kredich:
(Opening statement)
“We just competed really well from beginning to end. We didn’t have any letups as a team. Louisville is probably the most energetic team we have faced this year, and we had to match or exceed their intensity. I thought we did a great job of that. We’ve had close races and winning more than our share.”

“Tess Cieplucha had an incredible meet. The 200 free, 500 free, 400 IM were all the best she’s swam in season. Taylor Abbott did the same in the men’s 500. The 500s were huge moments in each meet. We were in need of wins in both of those events, either to cement the lead for the men and keep the lead for the women. Taylor’s race was aggressive.

“We had more extraordinary performances for Erika Brown in the fly. Matthew Garcia and Ryan Coetzee won close races in the 100 back and 100 fly and those were pivotal moments as well. Our first relays were good from beginning to end.”

(On Micah Bohon‘s rise in backstroke)
“Micah’s really come into her own. One of the challenges for Micah is she swims so many events well. This year, we needed someone to step up in the backstroke, and she’s stepped up each time. She won two events in backstroke against Louisville, and she’s leading off our 400 free relay as well. It’s a new role for her, and she’s really flourishing in it.”

(On seniors Ryan Coetzee, Peter John Stevens and Sam McHugh getting wins)
“All three of those guys are really critical for our team. It’s not that we take them for granted, but we count on them. Peter had one of his best in-season times. Same for Sam. One of the challenges for those guys has been for them to use those races as learning opportunities. The trend for each has been to get better and better as the season goes along. It’s been the commitment to improvement that has helped the culture for the team. Same for Liam Stone. They’ve had far-reaching meaning for us.”

Diving Coach Dave Parrington
(Opening statement)
“Overall, I was really pleased with the level of competitiveness as a whole in a somewhat tough environment. It was good to see the divers step up to the challenge in a meet where every point was extremely valuable to aid the whole team effort.

“Colin had another good day. He won the 1-meter in solid fashion. On the 3-meter, it was an epic battle between Colin and Liam (Stone) that came down to the last dive. I was pleased to see Liam to find some form as he gets himself into his normal competitive side. Will Hallam was part of that 1—2-3 sweep on 3-meter as well.

“On women’s 3-meter, Ana Hernandez pulled out a big win in a competitive field with a season best. The 1-meter was during an important part of the women’s meet. The top four or five were throwing great dives, but Rachel came out on top.”

The University of Louisville won 11 individual events and two relays but fell to the University of Tennessee Thursday night at the Ralph Wright Natatorium. The Volunteer men won 170-130, with the UT women edging the Cards 156-144.

“I am proud of the effort. Obviously, you want to win these things and that never sits well with me,” said Arthur Albiero, UofL head coach. “But you have to look at the progression. In many ways this is a young squad finding their ways and stepping up in many areas. There has been a lot of progress. That is what I am looking for is progression. We saw a lot of that today. That is part of what we are doing in November getting ready for bigger and better things. Again, I am proud of the effort.”

The Cardinals head to Charlottesville, Va. Nov. 10-11 for a two-day meet with ACC foe Virginia.