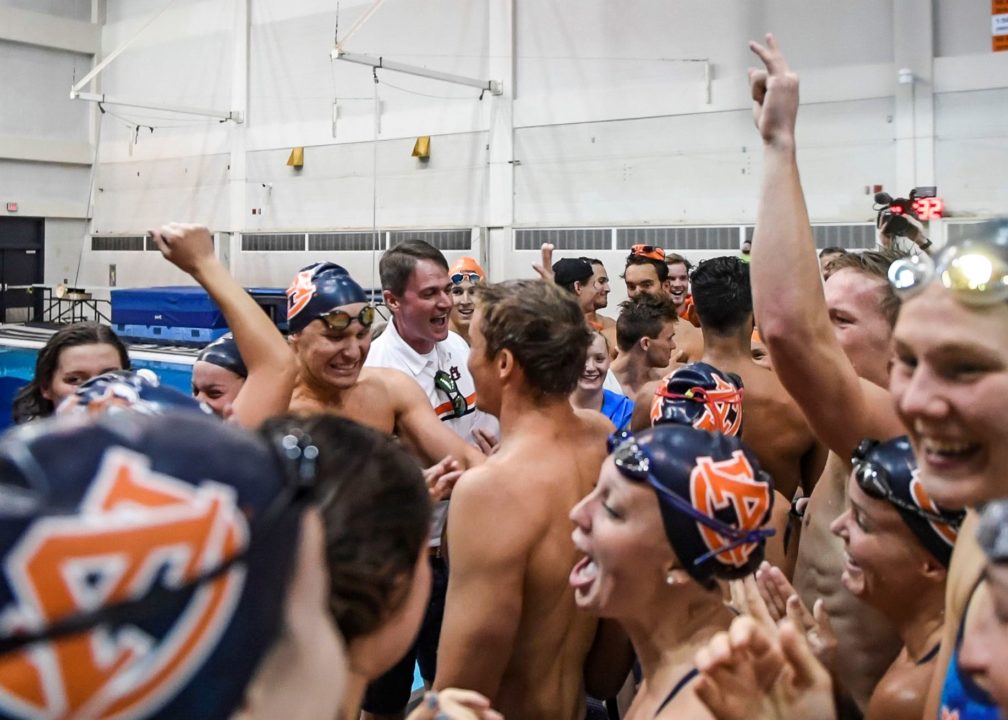 Streett is a strong freestyler, though he especially excels in mid-distance, toting a nice 1:37.0 in the 200.

AUBURN, Ala. – Friday’s Orange & Blue Meet from the Martin Aquatics Center was only an intrasquad meet, a tune-up before the real season begins in two weeks. But you wouldn’t have known that by looking at the athletes, who were jumping up and down and cheering on their teammates for every event.

When Auburn head coach Gary Taylor announced that Team Blue had won, there was a celebration right there on the pool deck.

“Elite programs like to compete all the time,” Taylor said. “That’s what we’re starting to see. I’ve seen a big change in that from one year to the next. They were really vocal. They were getting really competitive, really vocal and really loud. So I love that team vibe and emotion. People were caring about the outcome, and to me that’s really important.”

Taylor was also happy with how the Tigers looked in the pool. Team Blue avenged last year’s loss in the Orange & Blue Meet with a 296-282 win over Team Orange. But through 32 events, there were plenty of positives to take away from both sides.

“I couldn’t have really asked for more from the staff and the team itself,” Taylor said. “I thought we had some really strong performances both on the men’s and the women’s sides.

“We had some freshmen getting that opportunity to wear the ‘AU’ for the first time in their career and really stepped up and showed out. There were definitely some positive surprises from our freshmen class, and I also saw a lot of our upperclassmen continuing to grow and progress and take steps from last year right into this year.”

Auburn’s women will open the regular season on Friday, Oct. 11 with a trip to Dallas to compete in the SMU Women’s Classic. Then both the men and the women will return to the Martin Aquatics Center on Saturday, Oct. 19 for a home meet against LSU.

This Saturday, the 2009 Auburn Swimming and Diving Team, who won the national championship, will be recognized on the field at halftime of the Auburn-Mississippi State football game.

“The ’09 team is what I want Auburn Swimming and Diving to be all about,” Taylor said. “They came to Auburn with championship expectations and aspirations. They wanted to be coached hard. They worked hard. They desired to be really elite. And at the end of the day, even now 10 years later, they’re all in for Auburn and they’re all in for that Swim and Dive family.”

Is this the Orange and White meet? I’m sorry, gorillas are colorblind and I can’t find the results of the Texas inter squad dual

Perhaps the results will show up later on their website. Last year and many other previous years show results of the Orange and white.

I will say, there were some ridiculously fast times.

Well what were they

I thought Texas was usually one of the only teams that published results of their intrasquad. I remember seeing them and seeing the hyperventilating over fast times in previous years.

This is getting old, dude…

If schools are going to just send a press release that doesn’t provide times Swim Swam should not publish it. This release is worthless. Swimmers got in the water and swam. That’s crazy. Was the water wet? Because that would be mind blowing. Team Blue (and we have no clue who was on that team) bested Team Orange (and again no clue about the members on that side) Wow. I’m glad I know Blue is better than Orange. I always wondered about that! This was not the only school that sent a worthless press release. Maybe have a standard. Thanks for the press release but, no times no report.

Then don’t look at the article? If someone wants to report this then let them do so, and if you don’t want to look at it, then don’t.

To the 2nd sPeEd RaCeR – while I can see the joke you’re trying to make, usernames show up in all capslock so nobody else gets it….