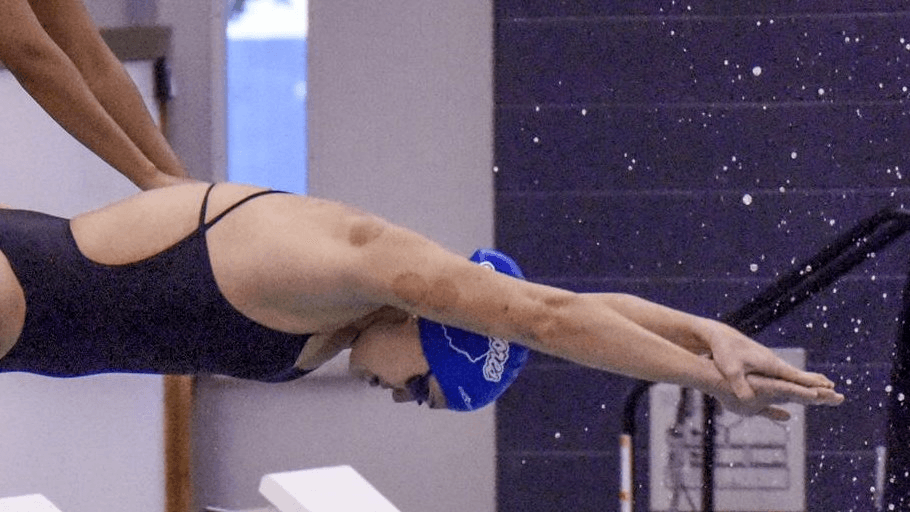 TERRE HAUTE, Ind. – Despite a week of heavy training, the Sycamore Swimming and Diving team raced hard and battled for a victory at the Indiana State Relay Meet on Saturday.

Surging Sycamores
The Sycamore swimmers won eight out of the 10 relay events during the day, including a pool-record performance in the 200-yard freestyle relay. The team made up of Alex Malmborg, Marlene Pavlu Lewin, Joelle Borchers and Hena Hassan set the Vigo County Aquatic Center record with a time of 1:36.60.

Leading off for the blue and white during the 200-yard freestyle relay was Malmborg who also set a pool-record for the 50-yard freestyle, clocking an impressive time of 23.78.

At the beginning of the meet the 300-yard butterfly relay squad of Borchers, Megan Schade and Ashleigh Sinks claimed victory with a final time of 2:57.37. Then, the 300-yard backstroke team of Kendall Hansen, Madison Brand and Pavlu Lewin followed that performance up with a win as well, touching the wall at 2:51.23, six seconds in front of second place.

Trying to make it three in-a-row for Indiana State, Martina Marks, Kerry Tepe and Schade earned a hard-fought victory in the 300-yard breaststroke relay as they finished at 3:23.11. The distance swimmers didn’t let off the gas for the Trees, as the 800-yard freestyle relay team of Cierra Campbell, Emily Webb, Vivian Kritikou and Elisabeth Peskin dominated the event with a win and a time of 8:02.61, 10 seconds in front of second.

In the final event of the meet, ISU came out on top, swimming to victory in the 400-yard freestyle relay thanks to Malmborg, Hansen, Borchers and Pavlu Lewin. They finished with an overall time of 3:35.32.

Coach Christensen’s Corner
“It was a productive day in the pool for us,” Head Coach Josh Christensen said. “We stayed focused and I saw us applying things that we’ve been working on in training.”

Coach Chen’s Remarks
“Overall it was a good meet for the divers today,” Diving Coach Fengting Chen said. “We did a different format than regular meets that allows divers to have the opportunity to do something different and fun after a long season meet. We will be off until January and that will give us some time to refresh and only focus on training and being ready to compete then.”

Up Next
The blue and white will be back in action after the winter recess, traveling to Springfield, Ohio on Jan. 12 for a double-dual meet with Wittenburg and the University of the Cumberlands.

Billiken swimmers finished first overall on the men’s side and runner-up on the women’s in the Indiana State University Relay Meet held December 1 at Vigo Schools Aquatic Center. Saint Louis placed in the top-two in 14 of 24 events.

Billiken women had two runner-up finishes at the weekend’s relay meet. The 300 back team of Katie Schmude, Smith and Alyzza Cruz finished in 2:57.84. Lindsey Turner, Olivia Wanasek and Claire Koh completed the 1500 free in 16:10.80.

Saint Louis swimmers will compete next on January 11 at Western Illinois University.

TERRE HAUTE, Ind. – For the second time this season, the Illinois State swimming and diving team competed at conference rival Indiana State, this time at the Indiana State Relays on Saturday. The Redbirds finished third overall out of six teams, having several excellent individual performances.

Redbird relay team Kolar, Clark, Rubocki, and Rivera turned in a first-place finish in the 400-yard IM relay, clocking in a time of 4:04.68.

Jordan Peterson, Kolar, Tillotson, and Reinholz turned in a third-place finish in the 400-yard freestyle, clocking a time of 3:44.61.

“We as a staff couldn’t be happier with how the Redbirds competed at the ISU relays,” said head diving coach Phil Hoffmann. “Coming off of Thanksgiving break, it is always a challenge to get up and race, but they did an excellent job of rising to the challenge. We competed as a team with a lot of energy and enthusiasm, which is just what this team needed.”

The Redbirds will take a five-week break from competition, before returning to Horton Pool on Jan. 12 to host Davenport and Lincoln College for the only home double dual of the season.

TERRE HAUTE, Ind. – Butler competed in the Indiana State Relay Meet over the weekend, taking a fourth-place finish at the Vigo Schools Aquatic Center. The host won the event with 170 points. Rounding out the top-three were Saint Louis (102) and Illinois State (74).

Butler’s top performance came in the 300-Yard Breast Relay. The ‘Dawgs finished second overall with a time of 3:25.86. The team was made up of Carson Middlebrook, Natalie Rohweder and Emma Spotts. The other top-three finish for BU came in the 1500-Yard Free Relay. The team of Emma Harris, Rachel Burke and Andee Bauer earned third-place with a time of 16:39.75.

Five different Bulldog groups placed fourth at the ISU relay meet. Megan Hanson, Claire Mastrandrea and Tori Horton came together for a time of 3:03.28 in the 300-Yard Back Relay. Horton, Isabel Heitmeyer, Bauer and Harris clocked in at 4:50.94 in the 500-Yard Free Relay.