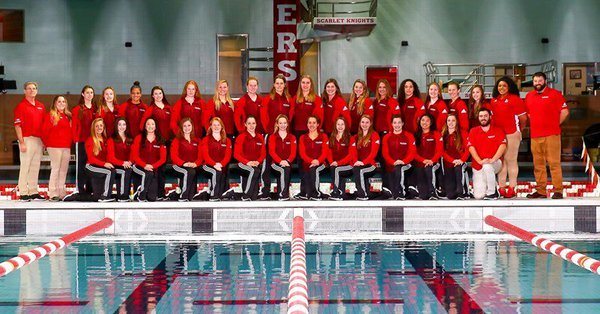 PISCATAWAY, N.J. (Dec. 1, 2018)– Rutgers swimming and diving continued their multiple day lead over their competition for the win at the Rutgers Invitational.

UP NEXT
The Scarlet Knights will be back on the pool deck when selected Scarlet Knights travel to Greensboro, NC for the USA Swimming Winter Junior Nationals – East, Dec. 5 through Dec. 8.

PISCATAWAY, N.J. — The Columbia women’s swimming and diving program wrapped up a successful week at the Rutgers Invite on Saturday evening, tacking on two individual victories in the final day of action. The Lions finished second overall in the team scoring with 2,097 points behind host-team Rutgers (2,379.5) and ahead of defending NCAA Division I National Champions, Queens University of Charlotte (1,837.5).

“It was a great racing opportunity this week at Rutgers,” remarked Columbia head coach Diana Caskey. “It was a good reminder for some and an eye-opener for the freshmen about the physical and emotional demands of a four-day meet. Great preparation for the Ivy League Championships.”

Making their platform diving debut for the Lions, first-years Briget Rosendahl and Michelle Lee stole the top two spots in the event to kick off Saturday’s finals performances on a high note. Rosendahl took the win with a score of 243.00, while Lee had a silver-worthy outing in 235.65. Both posted NCAA Zone qualifying scores in the event.

“Great performances by both of our freshmen as they made their NCAA Zone qualifying scores,” diving coach Scott Donie said after the meet. “As seasoned platform divers, they really have an edge on the competition.”

Senior Mary Ashby raced away with Columbia’s second win of the day, clocking a 50.32 in the 100 free for the triumph. She dropped more than two seconds from her season-best time in the event. First-year Clare Larsen was the Lions’ second-best finisher in the 100 free, placing fourth with a season-best 51.18.

Leading the way in the 200 breaststroke, junior Helen Wojdylo went 2:16.49 to finish second ahead of a Columbia group which took four of the top six spots in the race. First-year Lindsay Rispoli finished fourth (2:21.28), senior Jessica Antiles was fifth (2:22.97) and first-year Madison Leblanc took sixth (2:26.72).

First-year Cleo Lim earned Columbia’s top performer in the 200 fly, coming into the wall sixth overall with a season-best time of 2:04.96.

The final event of the meet saw the Lions’ ‘A’ squad of sophomore Jessica He, Ashby, Larsen and Pruden claim second in the 400 free relay in 3:22.06. Ashby had the fastest split of the group at 50.00.

Returning to dual competition next Friday, Dec. 7, the Lions will welcome in Princeton for their first home Ivy League meet of the 2018-19 season. The meet is set to begin at 5 p.m. ET inside the Percy Uris Natatorium.

CHARLOTTE, N.C. – The third-ranked Queens University of Charlotte finished competition in the Rutgers Invitational on Saturday evening, taking home one individual win and one relay win on the final day of swimming from the Sonny Werblin Aquatics Center.

Sophomore Sarah Jane Atkinson tallied the team’s lone individual victory, taking first place in the 200-Yard Breaststroke. The Charlotte, N.C. native record an NCAA Division II ‘B’ Standard time of 2:14.38 in the preliminary race, while senior Shelly Prayson (2:19.67) also had a ‘B’ time in the prelims. Fellow senior Hayley Blaauw‘s time of 2:20.42 in the final gave the Royals three ‘B’ cuts in the event.

Queens also recorded a win in the 400-Yard Freestyle Relay as the team of Anna DeBoers, Josefina Lorda-Taylor, Kyrie Dobson, and Prayson reached the wall in 3:21.99.

Queens’ next meet will take place on Friday, January 11 when the team hosts Catawba College in the Levine Center at 5 p.m.