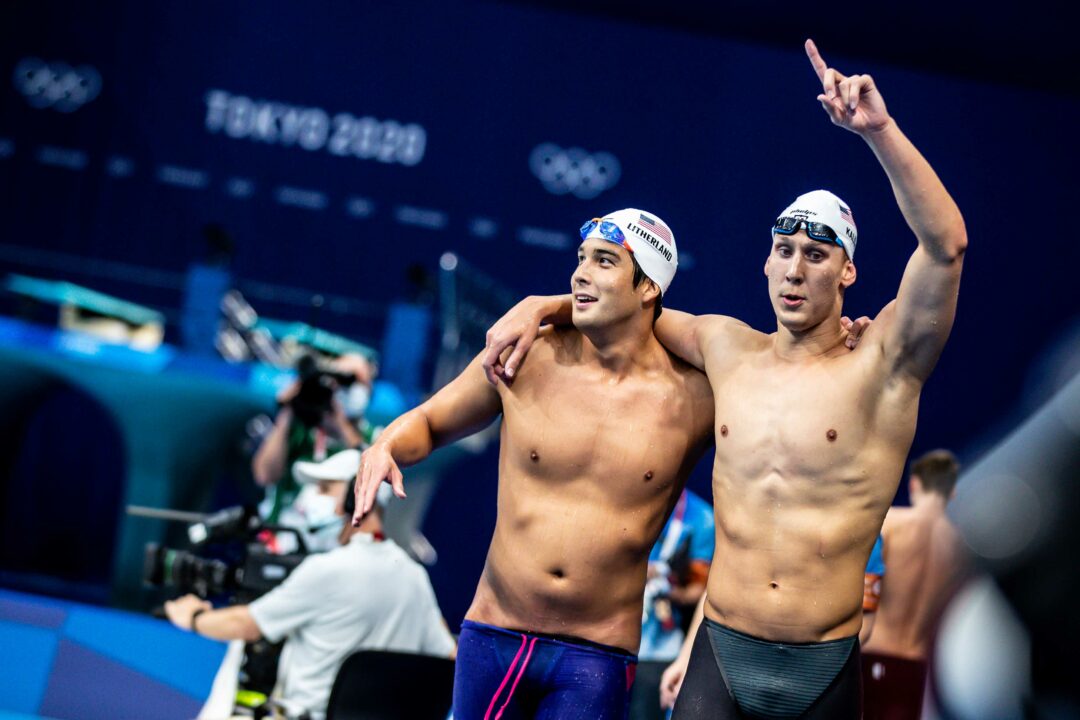 SwimSwam brings you the Top 5 races from Day 1 of the 2020 Tokyo Olympics, plus the Belly Flop of the Day and the Hot Topic of the Finals Current photo via Jack Spitser/Spitser Photography

#5: Chase Kalisz and Jay Litherland going 1-2 for the USA, Kalisz winning his first-ever gold and bringing home the US’s first gold of the Games

#4: We take Adam Peaty going fast for granted sometimes, but let’s take a moment to appreciate that through prelims and semis, he’s dropped 2 Top-10 times of all-time with 57.5/57.6

#2: Tunisia’s surprise Olympic champion in 18-year-old Ahmed Hafnaoui, who won the 400 free with a gutsy swim out of lane 8

#1: We’ve got to give it up for the Australian women’s 4×100 free relay, which not only won gold by over 3 seconds but smashed their own world record in the process

With the top 6 finishers all dipping under the 4:10 mark in today’s men’s 400m IM heats, reigning world champion Daiya Seto found himself out of the final in 9th place. Putting up a strong race through the beginning of the freestyle leg, the man let himself get passed by several swimmers to shockingly wind up sitting on the sidelines for the final.

“I thought I’d finish in 8th place but I misread the time needed to advance,” he said. “At the end, I misread the freestyle pace. It’s a shame because I’m in good shape.

The first swimming medal of these 2020 Tokyo Olympic Games was earned by American Chase Kalisz in the men’s 400m IM. The silver medalist from Rio clocked a time of 4:09.42 to lead teammate Jay Litherland and Aussie Brendon Smith who finished in the silver and bronze medal positions, respectively.

Yes, Kalisz won by nearly a second. However, the entire field was on the sluggish side, at least compared to historic data.

Times in finals generally sluggish; racing for position is primary point. Interesting I’ve not heard anyone mention the elephant in the room. Morning finals contributing to slow times and Carson Foster as world #1.

Foster is probably kicking himself for the way he swam at trial, but hes young and will blow the field away in 3 years.

Hafnaoui has got to be number one for me. What a sensational story.

Writing was on the wall for an Aussie WR in the free relay, if they went something ridiculous like 3:28 then maybe they’d have a case for the swim of the session.