Kalisz Takes 400 IM Gold, But About Those Final Times 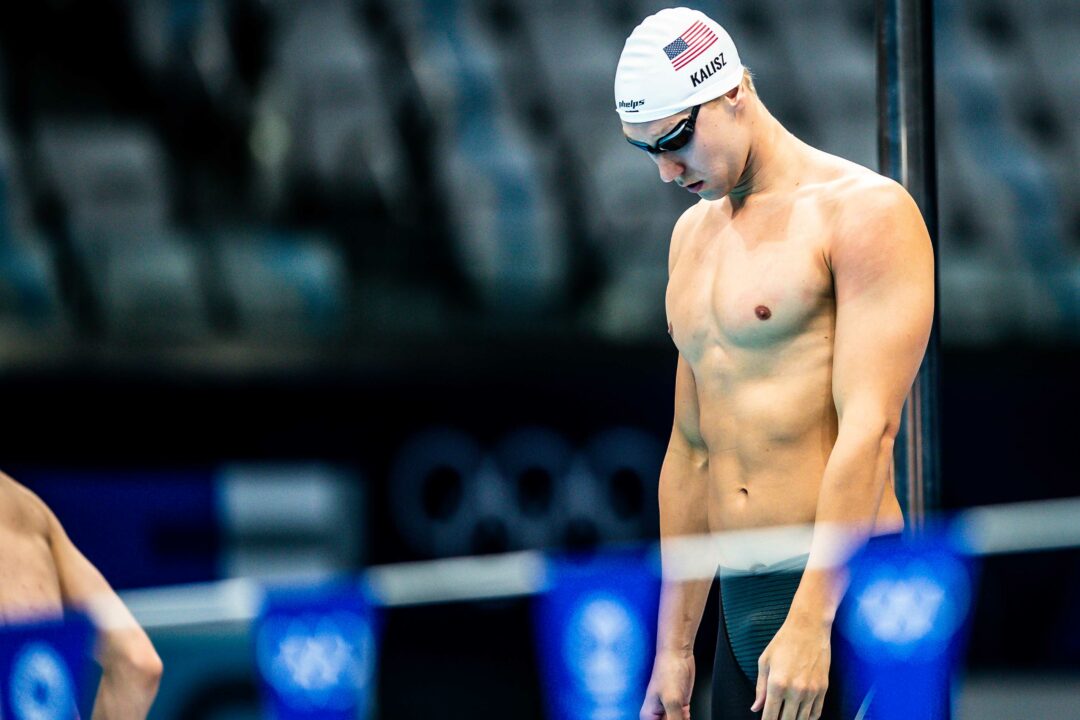 The Americans went 1-2 in the en's 400m IM here in Tokyo, led by Chase Kalisz and then Jay Litherland. But what happened with the times? Current photo via Jack Spitser/Spitser Photography

The first swimming medal of these 2020 Tokyo Olympic Games was earned by American Chase Kalisz in the men’s 400m IM. The silver medalist from Rio clocked a time of 4:09.42 to lead teammate Jay Litherland and Aussie Brendon Smith who finished in the silver and bronze medal positions, respectively.

Yes, Kalisz won by nearly a second. However, the entire field was on the sluggish side, at least compared to historic data.

As we detailed in our post regarding Japan’s Daiya Seto missing out on the final, the prelims, which took place in the evening here in Tokyo were quick. At the 2016 Olympic Games, it took 4:13.55 to make it into the top 8. The following year at the 2017 FINA World Aquatic Championships it took just 4:15.69 and the 2019 FINA World Championships saw a time of 4:15.24 as the minimum to move on.

However, finals were a different story, with every one of the 8 men clocking slower times than in the prelims.

Is the lack of fans in the audience a factor? Or does the timing of having finals in the morning coming into play? Debate in the comments.

Morning finals … blame NBC, it was their idea

I didn’t hear the IOC complaining when they cashed NBC’s hefty check.

And what do you think?

That the IOC cares more about the swimmer’s interests and competitiveness, or more about money?

Who’s looking out for the swimmers interests?

didnt affect the men’s 400 free. congrats to usa on preserving their 400IM legacy. must have been purely coincidence that everyone else in the final went slower

3:43 400 free is not very fast compared to the winning times of the previous Games. A little better than the 400 IM tho.

1
0
Reply
Not Tapered 🏊
Reply to  Verram

We’ve had morning finals before. It’s just a slow event this year.

Doesn’t explain the final being slower than the prelims. In Beijing, the majority of world records set were either in the finals or semi-finals. The bigger factors here are likely smaller crowds, pool closures for the last couple of years, and reduced international racing.

It’s pretty much nothing more than that. It’s not who’s the fastest, it’s who survives the all out prelims and can do it a second time. Trust me on this I’ve learned this lesson this year

Morning finals also in Beijing 2008. But it was pretty fast.

You mean the supersuits were fast, right?

Well he means Phelps, Lochte and Cesh were fast.

morning finals have NEVER been the call or order by the various companies around the world whose winning bid for telecasts right ONLY- it has been determined by a mutual agreement between the olympic host organizing committee with approval by the IOC. NBC ONLY won rights to TELECAST- not ever to determine WHEN the events in the actual olympic host country are held in that country and in their own local time…i mean really, think about the logic you’re proposing or alleging: following your logic, NBC who won the rights to broadcast in Atlanta had NO say over when, timewise the sporting events actually took place local time with the thought in mind that they needed to accommodate other the… Read more »

Yeah I dont agree with people saying it was the speed suits in 08, carson foster who lost at trials put down a faster time than all of them at a different meet

I feel like they could get away with no fans or morning finals not both.

Hopefully the people racing multiple events / sessions will adjust to the morning finals as the meet goes on.

No buts about it… the guy is forever an Olympic gold medalist.

People in other events swimming best times this morning…

They did this in Beijing as well. As we all know, that meet was such an outlier of fast.

well, techsuits are a different debate.

1) I don’t think Speedo Lzr is a super-suit, surely was way less efficient than the 2009 100% poly suits 2) For the three main contenders in the 400 IM (Phelps, Lochte and Cseh) I am pretty sure that the suit wasn’t so relevant: they were three fantastic swimmers and they wore only the legskins in that 400 IM final, showing that they didn’t care too much of the suit. 3) Today textile suits imo are comparable at those Speedo legskins; it’s bizarre that almost everyone doesn’t consider any more the suits progress 4) 13 years in Swimming (since that 2008) are, for the progression of times based on progression of knowledge, a very long period.

Some of the guys were bound to swim slower than prelims – always happens in a gruelling event like this.

For the top guys, I honestly think that the morning finals potentially added up to 2 seconds. Kalisz would’ve been 4:07 in an evening final, I’m sure of it.

The times truly aren’t important though – we’re in month 17 since the pandemic started, a lot of athletes had training interrupted over this time, and combine that with morning finals and no fans, and conditions are definitely sub-optimal. It doesn’t minimize the accomplishment of winning though – it means that you made it through the adversity and are the “last man standing” so to speak.

Who cares? He won against the best in 2021. Celebrate it.

Foster and Seto hypotheticals aside, are the ISL and the NCAA recruiting methods that lean heavily toward 100 freestyler/relay types the reason for the stagnation of the men’s 400/1500 freestyle and 200/400 IM?

Phelps/Thorpe/Hackett/Sun never swam college, and were funded through their countries for being outstanding at young ages, there doesn’t seem to be any reason for young swimmers to focus on longer events that intend to swim NCAA or ISL internationally

He definitely did not.

He probably took a class or three when he was training in Ann Arbor, if you want to call that “in college”.

In hindsight this comment is funny. Bad intentions aside. Phelps definitely swam in college lol.

No he definitely did not.

I guess he swam in grade school too

Phelps definitely did NOT swim in College.

LOL he did NOT

He swam in Ann Arbor while Bowman was the head coach there. He never competed for the University of Michigan and never planned to. He just wanted to stay with Bowman.

I’ve wondered that myself but then you wonder why the same isn’t true for women.