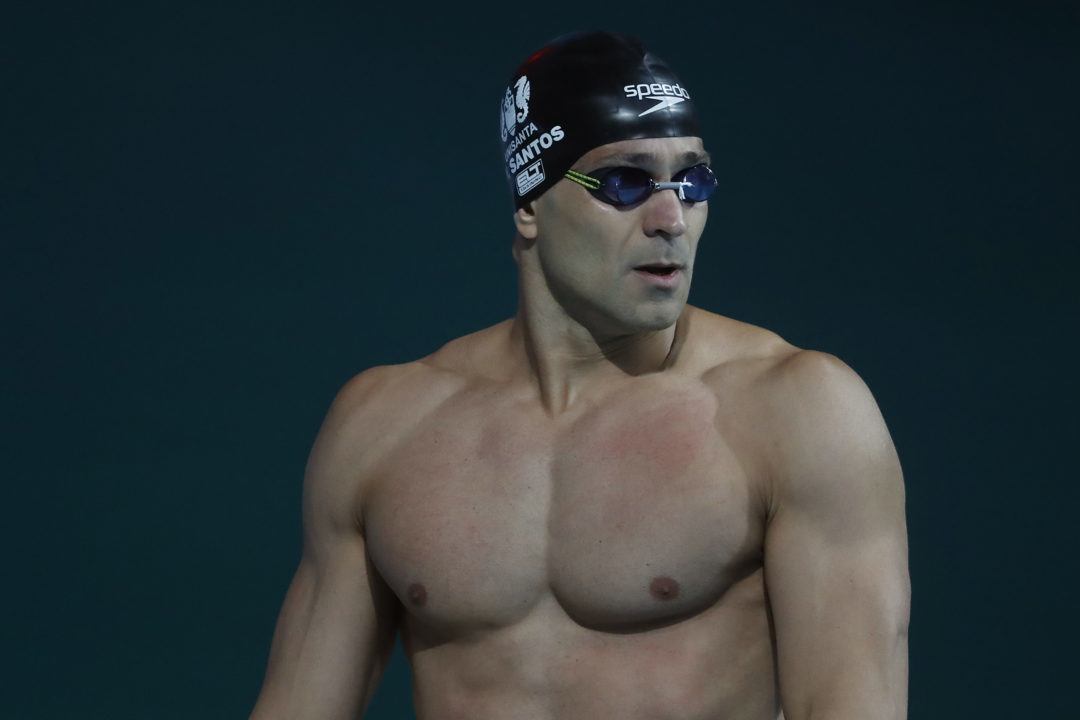 More than half of voters selected Nicholas Santos' 50 fly as the most impressive world record of the Budapest World Cup stop. Archive photo via Satiro Sodre/SS Press

Our most recent poll asked SwimSwam readers to pick the most impressive world record from the latest World Cup stop:

Question: Which Budapsest World Cup world record was most impressive?

More than half of voters selected Nicholas Santos‘ 50 fly as the most impressive world record of the Budapest World Cup stop.

Santos had a couple of factors working in his favor. First is his age. The 38-year-old is competing at a historic level well after most swimmers have retired. Santos has been winning international medals since 2004, marking a nearly fifteen-year career internationally. In addition, his 21.75 broke a world record that had stood since the super-suit era.

Just 30% picked Wang Jianjiahe‘s 400 free. Her swim is also notable for age reasons, though opposite reasons from Santos. Wang is just 16 years old, a phenom who has been rising rapidly for China over the past year. Wang’s swim took six tenths off the old record (compared to just .05 for Santos), but there’s also a widely-held belief among fans that the record doesn’t compare well to its long course equivalent, given Katie Ledecky’s primary focus on long course. Ledecky has never set the short course 400 free record, but has been 3:56 in long course – not at all far off the 3:53.9 short course world record. (Compare that to an 8-second difference in the long course and short course world records in the men’s 400 free.)

Alia Atkinson‘s 50 breast record pulled only 14% of the votes. The stroke 50s are often valued a bit less by fans, though that didn’t seem to hurt Santos’ swim. Atkinson already held this record and only took .09 seconds from it. On the other hand, the perhaps-overlooked fact is that Atkinson has lowered the mark nearly three tenths from the supersuited record of 28.80, and about two tenths from the now-invalidated world record of 28.71 from Yulia Efimova, who set the record in 2013 but had that time invalidated by a doping sanction.

Below, vote in our new A3 Performance Poll, which asks voters which of the three men’s programs hit hardest by graduation and other personnel losses will finish highest at NCAAs:

Based on the discussion activities of swimswam’s readers one can conclude that the majority of swimswam’s audience is more interested in and is more familiar/knowledgeable with the competition of male swimmers. No wonder that Santos was picked in this Performance Poll. And I think that his age was the major factor that determined their preferences. I won’t be surprised if people know at all who was the previous world record holder in W400FR SCM. And if this record was soft or hard or was set in the event with the history of very weak competition.

I think swimswammers enjoy any impressive swim and can give a rat’s behind if it’s male or female.

As a very simple comparison to test swimswammers’ interest in male vs. female performance, I decided to look at the number of comments on mens NCAA meet articles vs. womens NCAA meet articles (chosen because it is one of the few high-level events in swimming where each gender has their own meet and, therefore, their own meet recaps, which makes the numbers a bit clearer). Obviously it’s not the whole story, but the difference is pretty glaring.

Men’s NCAAs was much more interesting especially when it came to the team competition and points. Women’s was not. Was Stanford from the start and was never going to be anyone else. Men’s points race went back and forth and had Dressel breaking crazy barriers. Not as clear cut as you make it seem buddy.

Me: “As a very simple comparison…” and “Obviously it’s not the whole story…”

That Guy: He’s trying to make it seem clear cut!

I think it comes down to a simple difference. Do you want to watch faster swimming or slower swimming?

Then a priori men’s records are more exciting than women’s ones and there was a silly idea to run this Performance Poll. Have I gotten you right?

As it should be.