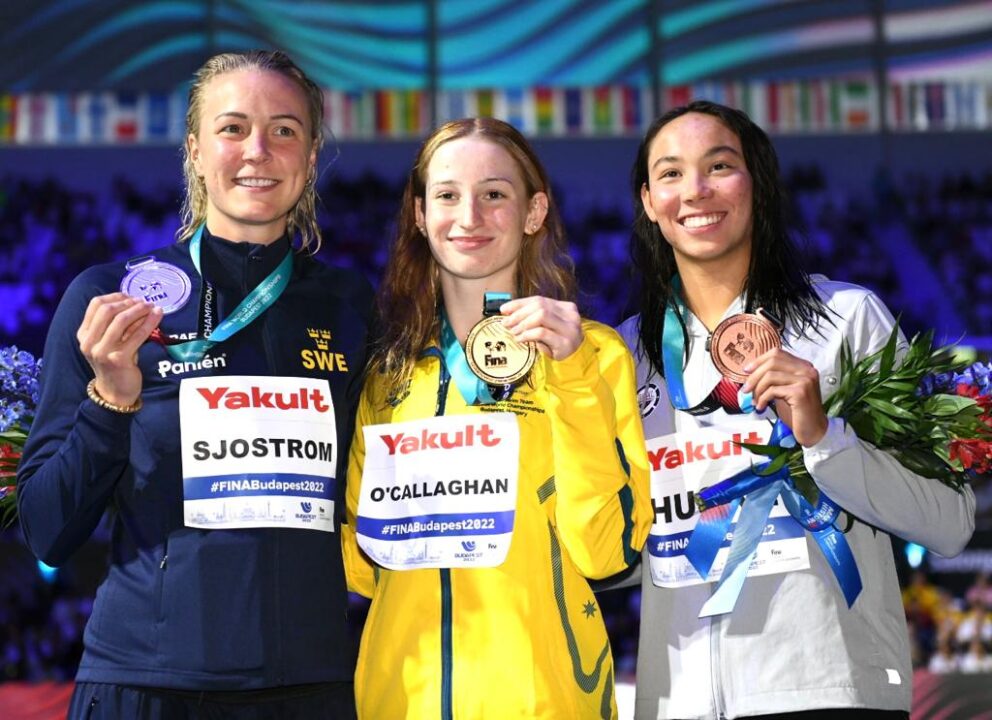 Mollie O'Callaghan was the top pick to win the women's 100 free at Worlds, and she did just that by topping runner-up Sarah Sjostrom by 13 one-hundredths. Current photo via Fabio Cetti

Our most recent poll asked SwimSwam readers who would win the women’s 100 freestyle at the 2022 World Championships:

Question: Who will win the women’s 100 free at the 2022 Worlds (without Haughey in the field)?

This poll was doomed from the start.

At a meet where swimmers have been dropping left and right due to injury and illness, between the time the poll was published and the women’s 100 free prelims got underway on Wednesday morning, two of the five options had withdrawn from the competition.

Siobhan Haughey, the Olympic silver medalist in the women’s 100 free, pulled out after sustaining an ankle injury last month, and then Shayna Jack, ranked #2 in the world this year, broke her hand in warm-up.

The poll was updated as soon as Haughey withdrew from the meet, giving any readers that voted for her the opportunity to pick someone else (while the votes cast elsewhere stayed intact).

At that time, Haughey had received roughly 20.7 percent of the vote.

So when we look at it and see that Mollie O’Callaghan came out on top with 40.3 percent of votes, the percentage of selections she actually received was likely closer to the 35 percent range due to Haughey’s name being removed from the mix midway through.

But still, O’Callaghan was leading the way coming into the race, and she got the job done by winning the final in a time of 52.67 despite revealing post-race that she dealt with a leg cramp during warmup.

O’Callaghan was the logical pick to win given that she came into the meet ranked first in the world, having gone 52.49 at the Aussie Trials in May, but still, the 18-year-old came in with a lot of expectations and not a ton of big-meet experience.

Sarah Sjostrom, the second-leading vote-getter at 31.7 percent (after Haughey was removed), placed second in the event in a time of 52.80, her fourth straight medal in the event (but still hasn’t won gold).

Penny Oleksiak, who ended up being the highest-placing finisher from the Tokyo Olympics (fourth) racing the final, earned 13.5 percent of votes to win, and ultimately took fourth again in 52.98.

American Torri Huske was the top finisher not included in the poll, reaching the podium with a PB of 52.92 to win bronze.

Below, vote in our new A3 Performance Poll, which asks: Which race was the highlight of the first half of Worlds?