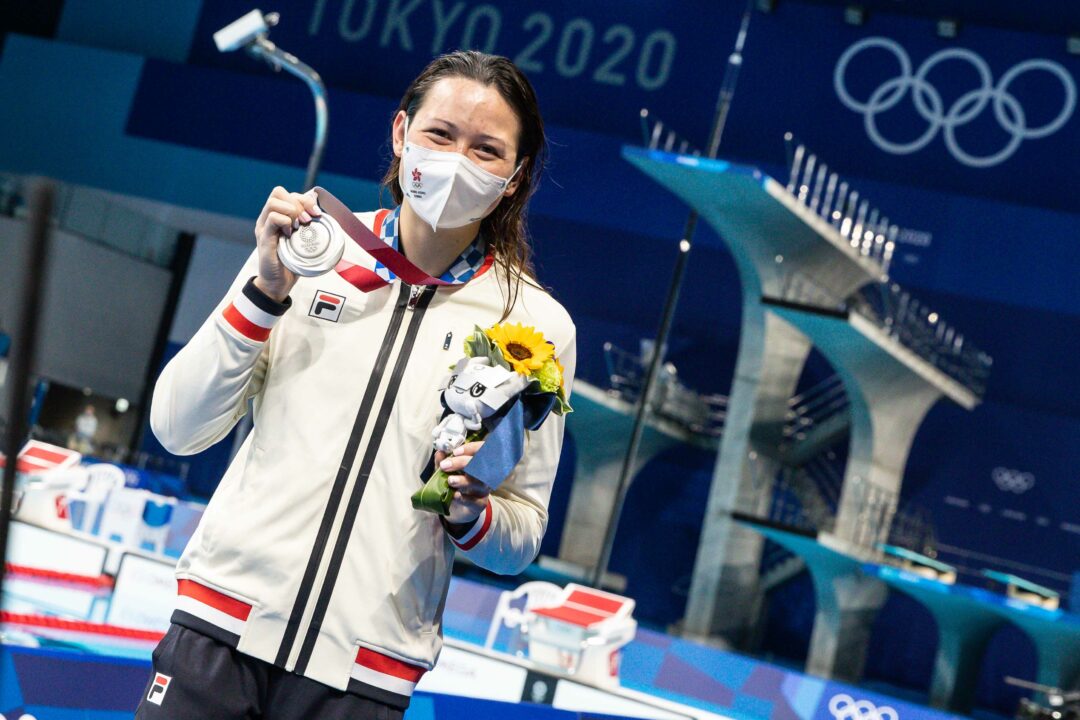 The double Olympic silver medalist has announced that she won't race individually at this meet, citing ongoing complications from her ankle injury. Current photo via Jack Spitser/Spitser Photography

Siobhan Haughey will not be racing individually at the 2022 World Championships due to ongoing complications from the ankle injury that she suffered in May 2022. Haughey made the last-minute decision not to race at this meet and will be absent from the 100 and 200 freestyles.

We reported on May 20, 2022, that Haughey had injured her ankle and decided to pull out of the Mare Nostrum series. At the time Haughey described the injury as “minor.” Her coach Tom Rushton reported at the time Haughey could barely walk on the day that she injured it.

But one month later, Haughey hasn’t been able to return to full form despite receiving “fantastic treatment” from the medical staff that worked with her over the past month. Tom Rushton provided a full update on how Haughey is doing and explained her decision to not race at this meet:

“Siobhán has made the decision to not race here in Budapest. Obviously, it’s been a difficult call to make but the whole team around her support her in it.

When she injured her ankle in mid-May we knew it was going to be a challenge to get to 100% by World Championships. She’s received fantastic treatment from the sports medicine staff on the Hong Kong team as well as the local clubs where we’ve been on the Mare Nostrum tour and in Fenerbahçe (Istanbul). They’ve all worked hard to get her to this point, and we want to acknowledge the job they’ve done – getting from where she was to being able to consider racing is because of them” said Ruston.

He went on to say “none of us are here to just show up, we want to be here and be racing with the best in the world; performing our best, against the best, at the best possible time. She wouldn’t feel like she could do justice to the work she put in before the injury if she were to take to the starting blocks here.”

“For now we’ll take a step back – mentally and emotionally this has been a very trying few weeks – so with that pressure lifted we can relax and start to plan for the fall and go forward from there.”

Haughey is a big absence in the women’s events and was the top seed in both the 100 and 200 freestyles. Her entry times of 52.27 and 1:53.92 come from the Tokyo 2020 Olympics where she collected a pair of silver medals. She finished second in both events to Emma McKeon and Ariarne Titmus, respectively.

Both of those swims were new Hong Kong national records as well as new Asian records for Haughey. After winning double silver at Tokyo 2020, Haughey ended 2021 by setting a new world record in the short course 200 freestyle when she hit a 1:50.31 to take out Sarah Sjostrom’s time of 1:50.43.

The fact that Haughey has dropped out of this meet is also notable because Haughey won’t have any other high-level racing opportunities this summer. Unlike the Canadians, Australians, and British swimmers who can swim at the Commonwealth Games and the Americans who might get a shot at Duel in the Pool, Hong Kong doesn’t have any other big meets.

The 2022 Asian Games, which Hong Kong would have raced at, were pushed to 2023 earlier this year amid coronavirus concerns. Hong Kong used to be a part of the Commonwealth but was peaceably handed over to China in 1997, meaning that the country doesn’t race at Commonwealth Games.

She has the Maccabi Games next month

No, she does not.

Obviously an awful disappointment for her but my goodness I don’t think there are more injury prone athletes than elite swimmers!

I think it’s also that it’s harder for a swimmer to train/compete with any type of injury, even minor, and still be competitive with the best of the best, compared to sports like basketball or baseball for instance

Unfortunately that’s the way these things work. Camps understandably err on the side of caution, regardless of glowing reports during treatment. It will likely be the same thing with Karsten Warholm in a few weeks.

Darn shame given the way it impacts the dynamic of the race. I was really looking forward to watching Haughey out front and O’Callahan trying to chase her down. Now I guess it depends on what Oleksiak wants to do. She went out very fast in Tokyo but doesn’t always swim it that way, including against McIntosh during trials.

Yes we are seeing the emergence of some new real talents, Popovici, Hwang, Huske, Leah Harris, O’Callaghan, Curzan, Winnington, Martens, Marchand, Pallister & we are only 2 days in, but some want to complain about those not there. AMAZING.

Officially giving up on pick ems

Mine have been an absolute disaster !!

Mine too!! I’m scrolling right down the pick ‘em results

See, now even the Hong Kong swimmers are getting scared of the American swimmers, not just the Aussies.

Are you playing???? Who’s scared of the Americans

It’s a joke. The Americans keep saying that anyone who isn’t at WCs is scared of them. Because Americans are incapable of understanding anything from another perspective.

MURRICA perspective is THE BEST!

Oh, that’s a big shame. Was keen to see what she can do post Olympics. She’s emerged as one of the top free sprinters in the world, and I think both the 100 and 200 would have been more exciting with her swimming.

Nevertheless, happy for her now it seems she’s more relaxed and doesn’t have stress surrounding her participation.